I saw Oikos pop up in the Typepad blogs and a few clicks later, I was reading French language blogging about God - Funny thing is that I know these people in Paris, I have stayed with Jonathon Finley in their WiFi house during an event earlier this year (read my old blog entry for the skinny), and the guy visiting them this weekend, by the name of Matt Glock, is a good friend of mine also.

Great story: I am on a flight from Brisbane to Sydney 2 years ago and the guy next to me, reading a Newsweek is an American. I tell him I live in Europe and He tells me he has a brother who is a missionary living in Grenoble, France. I say, "Well, that would probably be Matt Glock" and this guy totally flips out - "You know my brother?????"
Anyway, Mat led an event in Paris recently on Emergent church (I was at the first one in Paris this year) and Al took some notes - a whole lot of notes on the main speaker, Stuart Murray.
Best note from Stuart's teaching from Al's notes:
". Many are post-charismatic.
· After 20 years, they would rather shoot themselves than sing another chorus."

Speaking of postmodern monasteries, another BoilerRoom opens today, this time in West London

Bruce, who is grieving over losing the rugby a minute ago, put me on to this blogging course resource page.

Today I am in Dresden, Germany. I wont be blogging. Tell you about it later.

She Got Maryellen Eyes

The type you are reading right now was just increased in size (at least it is supposed to be) at the request of Maryellen McKee, of Whitethorn, California, who doesn't want to buy glasses. Hi McKees!!!

Big-Budget 'Narnia' Film Nearing Production This should be an improvement on the last Narnia film series!!! Good to see them film it in NEW ZEALAND.

I blinked and missed it

Brad told me that he and his friends were all discussing an excellent post by Dan Hughes on TheyBlinked but when I went there, I couldn't see which one they were talking about. I like Dan's blog and his way of thinking. Dan, who I met in person earlier this year in Austin, is another guy wrestling with organic church on the BEING level and what that looks like. But how to communicate it? Defining the stuff that God and his followers are doing is getting harder all the time. Here is one reason why. I feel that our spirituality is often defined by what we DONT do rather than what we do. Some of us are moving from a highly active Christian life, in which we serve God by our restless activity, to a life characterized by a God-ordained simplicity and sacrifice of idolatrous busy schedules. Translate that to church: Our parents defined church by what they DID when they got together. But what if emerging church was defined by what people gave up to be together, by the activities that they sacrificed in order to "assemble" and the assembly itself was an act of worship, valuable because these people stopped the machinery of makingmoney/havingfun/cleaninghouse/etc to BE TOGETHER with God and each other. Not what you do, but what you don't do. The Catholics might do this better than the Protestants - with their discipline of silence, abstenance from foods and things, fastings, etc. Worth thinking about. But back to Dan. On his old blog last year, Dan asked a question that is worth digging up and repeating along the same lines but regarding Christian living and spending money: "what if communities regularly practiced protracted periods of living without buying? what would that do to our patterns of life? how would that require new ways of thinking? in what ways would that open us up to being shaken a bit by an intentional return to momentarily living through sharing, barter and giving exclusively? "

Checking in on my friend in Seattle who has a really good web site - dwightfriesen.com - for thinking and art. Hi Dwight. Really late now - 1:30am. I felt a little sick earlier and went to bed. I woke up and thought it was morning. But it wasnt at all moring. Now I tap tap at my computer like a Zombie and dont know if I should get up officially or just go back to bed. iTunes listening check: My Own Prison from the album "My Own Prison" by Creed 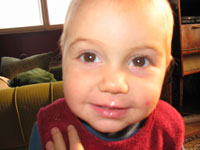 Tamara has had a rash which is now clearing up - we stopped the red cordial drink and it seems to be doing the trick. She is well. She speaks a little. She loves her dad. She likes to put on shoes and dress up like dad. And eat what dad is eating. Dad's happy! 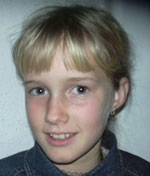 Elizabeth got her tooth capped, after knocking out the corner of her front tooth over the weekend. Unfortunately, it was a bit of a horror story. The dentist at the hospital in Prague was barely competent. She was barefoot!. Yes, barefoot. And after she put the putty in and finished off, I had to encourage her to FILE the tooth down to the same size as the other tooth. She filed it down a bit, but it was a big bulky lump of white clay on her tooth, and when I got home, my wife was not too happy with the job. Nor was the hospital, apparently. They took photos of the lump and another dentist (this one had shoes on) took it off and started again to make a perfectly matched tooth cap - which she has right now. Didn't cost too much. Fantastic to have her tooth back to normal.