Flying Chair Check out an "extensive list of blogs you see, over 500, in the voting pages" for best Asian blog. Or just go here and see who won.

I just sent my wife over to london to look at accommodation possibilities for us. That means i get to be Mr Tall Skinny Mum for a few days. 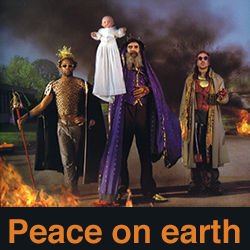 Peace to you all this Lord's Day. Peace on your lives, families, events, dreams, goals. And peace where it is needed most.

This image (minus my "peace on earth") is from the Inri collection, by Bettina Rheims and others. The banner image is adapted from another of their images. I attended the Inri photographic installation in Prague, Easter 2001, and bought the book.

The Friday Fax that arrives in my email box each week, and hundreds of thousands of other email boxes, has good news from Germany:

Germany: 74% of German children believe in God
"Religion and faith again play a significant role in German children's lives. That is the result of a study performed by the Allensbach Institute for Demoscopy," reported the newspaper 'Die Welt' on 21st November 2003. 74% of the 6- to 12-year-olds interviewed stated that they believe in God. 58% indicated that they also pray regularly. There is an East/West divide: 82% believe in God in the West, whereas only 27% do so in the East.Source: dpa, www.welt.de

Last week I was wondering what The Friday Fax would look like as a blog site. The next think I knew, I had whipped up a quick blog called the Friday Blog. I would be curious to know how some of you would create it differently. Maybe we could give the finished product to Wolfgang Simson as a Christmas gift?

The advantage of the blog version for geeks and new media people would be:
1. RSS feed - we could subscirbe - it would come to us directly, without clogging up email boxes. I get news feeds from other sources - why not from Friday Fax?
2. Discrete links - each news item would have a permanent address and link.
3. Comments - although they could get controversial
4. More immediate way to link to original news sources like Welt.
5. Search by category - all the posts on India, for example.

i joined a few forums this weekend, to jump into some conversations.
Steve from blogger forum asked me to talk about my defection from blogger to typepad.
And christianitysucks.com was a site that needed another voice, so i decided to put mine there and see what happens.
As you can see, I got up quite early this morning.

blogging friends in my email box

Recently, i have received a lot of really encouraging emails, tips and hardly any rebukes. This has made my life fuller and more colorful these past few months. I wish I could have a million links on this site to honor all the bloggers who email me. Here are some of them:
Christmas greetings to you all.

My dear old Dad sent an e-Christmas card today.
My dad lives in Beenleigh, Australia. He has always loved the potential of the computer. Back in 1980, he set up a training conference in New Zealand for teaching ordinary people how to use computers. Great idea, and ahead of its time.
He used to say that one day we would all be receiving news in data form that was sent to our TV's. Right again! We can receive data on our TV screens. Although he didnt see that we would also be able to receive TV on our computer screens.

My dad rocks. I wish he was well enough to come and see me in Europe.
Merry Christmas DAD!!
Look out for my blog-book that comes out soon on the subject of new media - I will be dedicating it to you, since you passed on your love of media to me.
By the way, Dad, a Marx Brothers movie was on a few nights ago - absolutely brilliant!!

This morning the Carter family went back to England and I saw them off at the airport. The have been staying at the Peach, with us , and we have had a really great time. They will be looking for accomodation in London for us, should we decide to relocate there. Debbie will be going there on Monday to meet with a Vicar of a church that has a large vicarage in East London.
Very expensive to live in London, I know, but the airports have all the cheap flights and it would be nice to talk in English.
We are also considering Budapest, since there are a number of mission groups that could use some help down there.

his family came with him

adam left behind
suburban friends
and a comfortable world
to begin his pilgrimage
a quest for life and healing
among urban primitives
and his family came with him.

Continue reading "his family came with him" »

yeaaahhhhhh!. our kids were sledding on the fresh snow. We have friends from England here (Mark and Tamsin Carter) and their three kids were having a great time in the snow with our kids and the Stuarts.