Simonas (from Lithuania) left a thought provoking question on my comments a few days ago:

"the idea of the emerging church is very interesting and intriguing. i'd definitely like to find out (and, mind you, experience) the concept.
another thing i wanted to ask - why people blog, especially those, who are in this church approach? i like the idea myself, but i'm interested to find out the reasons that others have.
thanx a mill. Simonas"

The task of defining the emerging church is a mammoth one, (and i just got asked today to write up a definition) and i dont want to try it here, but it is fascinating that blogging plays a significant role. Many bloggers are also players in the emerging church. It is obvious that there is a cross-over of values - new media values and new church values, and the world of blogdom is one of those crossroads. when i get time, i would love to write something up and uncover this whole thing.

Thanks BigLoose for the link to this article. I am blogging this so that i dont lose it. I want to read it later.
The article is Life as an Artificial Lifeform: When VJs become VJs and VideoPerformanceArtists become VideoLiveActs

I am still thinking about the idea of Grid, and the fact that creativity flourishes in constraint.
The word of the day from ourdailyblog.com is

"IF YOU wish to make progress in virtue, live in the fear of the Lord, do not look for too much freedom, discipline your senses, and shun inane silliness." Thomas a Kempis

i left some comments there regarding freedom and why i like grids.

its not easy to please everyone, and i often find myself in the position of not being understood or appreciated by certain segments of the church. many of you are in the same position.

the first group that doesnt understand us much is the traditional church. they feel comfortable in their diagnosis that we are philososphically relativist, consumeristic, materialist, out to change their churches for the worse and lead the young people into an unethical way of living. when we show them that they are wrong, that in fact our ethical standards reach into areas previously ignored by them, and that we take a stand against consumerism more than they ever did, when we explain these things to them, they are often disappointed with us. they sometimes wish that we actually WERE all those things rather than have us blow up their stereotypes, forcing them back to the drawing board.
Example - i get criticized for dressing up at conferences (which i like to do) and using grids on web sites (which i like to do) by older people who have been told differently. i end up apologizing to everyone and wondering why i am so apologetic.

the other group that gets disappointed is the newly postmodern, those that have recently left the church, the cool groups on the edge who have an ax to grind and base their identity on their rebellion against the norm. They are frustrated with us because we are not angry like them, or that we are not "edgy"
Example - some bikers at the Wabi Sabi event last year in Austin told me that it was "not edgy".
. . . well excuuuuuuse me for getting healed!
. . . excuuuuse me for loving the church.
i understand where they are coming from and was probably there for a few years myself. But i and many of my friends feel we have come through all that and and on the other side of that stage.
this is why many of the postmodern labels do not stick to us, upsetting the traditionals that are hurling the criticisms and watching them fall off us, and upsetting the disgruntleds that are so tied up in their new identity as rebels that they are not able to appreciate those further down the tunnel or those who are choosing to rebuild, rather than tear down.
Case in point. At a recent alternative Christian Festival in Germany, a friend came with us. She used to attend the Festival when she was Goth and found wide acceptance. But now that her journey had matured and she dressed with color, she got some flak for not being Goth anymore.
its hard to keep people happy when they wish we would settle in to the sterotypes they create and JUST STAY THERE.
all that to say, that i think it will be important over the next 2 years for those in the same stage i am in to write about their experience, giving definition to where we are and how it is different from what is currently being misunderstood.
i have done some of this in my 3 stages of postmodernity, but not enough.
sorry - i am not making much sense, and dont have time to go over this to make it any more legible. i am in a library and am now getting back to writing my book. hopefully it will be more congruent that what i have just written.
congruent - thats a good word.

the secret of my other sites

hey - sorry about the password protection issue yesterday. my blog editing software send the photo to one of my password protected blogs and was trying to link to it. all fixed now.
so why do i have other sites that are protected?
well, as you may know, i have been working on a writing project - a book/blog that is a narrative missiology, hypertexted to the max, synchronic in its scope, and is deeply linked back into other resources. this is the book i was hoping to give a sneak preview of on christmas day (thanks to the guy who asked about it on christmas - you had a right to ask) but it was not ready, and honestly, i was spending time with my family over christmas and did not want to spend the holidays in front of the computer.
anyway, the writing project is progressing well and i am ending up with a number of sites to support the main book site. none of it is ready to release and so i have put passwords on all the sites until i open them up to you- which should be quite soon.

the man with the natural mohawk 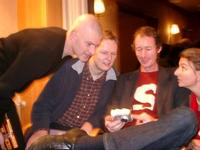 Marc is writing up a good summary of what we all did in Norway last week, but he may not be telling you Manfred's story.
Manfred, (left in picture) is from Sweden and we have met a few times. We shared a room the first night. Manfred has a rare and fascinating hair disease which he gave me permission to tell you about.
The guy has a natural mohawk - ie, it only grows on a strip on the top of his head. This is a HOLY mohawk, designed by the hand of God. It is also growing narrower and sharper, as time goes on, and as the patch changes and gets more definition - truly a mohawk on a journey.
Of course there is much more to Manfred than his cool hair. He mentors young people, helps church starting in Sweden, and until recently was heading up the Willow Creek Association in his country. And impressing young people with his head.

A few thoughts on Mohawks:
1. The mohawk is not longer offensive or radical. Just another cool haircut.
2. Mohawks take a lot of work to maintain and use a lot of gel.
3. Lessening the maintanence of mohawks requires one to sleep with their head facing down on the pillow. (i remember waking up in San Francisco many times to see mohawks sticking up like a small forest of trees)
4. The mohawk is now in its fourth decade and is much older than some of you.
5. The mohawk was chosen back in the 1980's as the official image for short term mission organizations who were trying to show their connectedness with emerging culture.
6. The most mohawks we gave at one single Bible Study: 3
7. The mullet is the new mohawk, and may be the only haircut in existence that ignites the same response that the mohawk once did. Can you imagine Bill Hybels with a MULLET?

Well, i am back in london, as you might have guessed. i took 2 days to hang with the family to make up for my absence in norway. we went into london and celebrated hannah's 6th birthday party. yesterday we spent time with maggie blick and co. from australia, and then hooked up with joel buchanan from montreal. joel came back to our little apartment to hang out, and then left today for canada.
this morning i met with shannon hopkins at gatwick airport, on her way to houston, and dropped off a suitcase that jessica stricker left behind, the same jessica that will be reading this today to see if her suitcase is really coming back to usa or not.
Right now i am in an internet cafe, outside of jonny bakers office, catching up on email. bob carlton has a good article for me to read on the "Bottom Up Economy" and there are a whole lot more emails to respond to.
soo . . . . its over and out for now. hoping everyone out there is off to a great start to your week!

Meet Erling Thu (link to his main blog). He is 61 years old and has been blogging for 18 months. His wife started last month. He rocks and he was at the conference. i like this guy. There were a lot of grey haired leaders in norway, all of them very cool, but Erling seemed to understand completely the emerging culture value system and even lives it out. He wrote a poem during my talk which i encouraged people to do, which should be available on his poetic blog "To Be Somebody".

G-Force 2.5.3 released yesterday. a fantastic visualizer that i have used since 2000. Download it and have some fun. i used to teach my conferences by dropping images and texts into this free program. 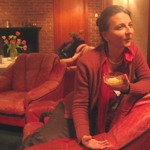 Big question for me right now is this, and it is a really important issue: Does Kerstin Hack, who blogs at Berlin Rocks and is sitting at our table right now, look like Pee Wee Herman or not?

She certainly acts like Pee Wee. 2 nights ago we went into Bergen and she jumped up on some statues and started posing - very unnorwegian. If she knew how to do the Pee Wee Herman dance, she probably would have done it.