Somewhere near Barcelona. I am hanging with the 24-7 Prayer International Leaders for a few days. I am teaching on "Missional Communities" and am praying that God shows us all the way forward.
Back on Saturday. 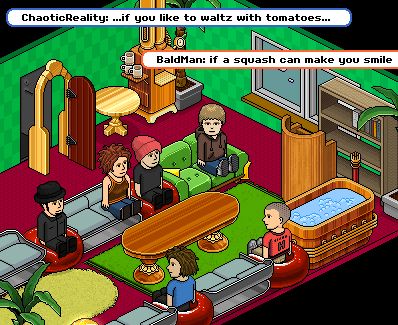 Hey - thanks for a great time. Good to see so many new people from all over - Portugal, Canada, Germany, even Scotty's wife with baby. The screenshot was taken during a God-moment when everyone broke out into spontaneous singing of Veggie Tales.
Next Tuesday - I would like to shoot a movie inside Habbo Hotel of a Bible scene. Plz suggest a good one with lots of actors and dialog. Song of Solomon and Esther were suggested tonight, along with The Passion of the Habbo. Let me know.

Who is worthy of saying such a thing? One of the hot conversations right now is the idea of the Post-Emerging Church.
Lets talk about it onight at 7pm London time. Suddenly Seminary guest room at Habbohotel.co.uk

Here are some of my thoughts:

Who can ascend the post-emerging church hill? Not he who has from a helicopter dropped, young Lotus. Nor he whose ascent has through books and conferences been. Only they who through the valley of emergence have walked, stage by stage, the lessons of God learning.

A Monastery in Orkney: Our Next Step?

I think i can share this one now. Some of you may have heard on the grapevine, but I have not come out and said it yet publicly. i should say it now and include you in our decision, because i want you to continue to be a part of our lives and ministry. We think the next step for us as a family is to move our base to Orkney Islands, NE Scotland.
Sounds outrageous? Wait. it is even more wacky than that . . .
We think God wants us to start a monastery there - a pilgrimage centre for young people to equip, send out, and guide them to where God is leading them. A place for prayer, reflection, research, arts, study, and new media resources for the new wave of young apostles and pilgrims.

Continue reading "A Monastery in Orkney: Our Next Step?" »

Eddie Gibbs from Fuller Seminary has some good thoughts on the emerging church in UK and USA . . .
"In the UK, those working among young people are going with the young people into their culture rather than extracting them and processing them for the Church sub-culture. In the USA, the trend is in the opposite direction, i.e. extracting people from “the world” in order to bring them into the Church.

Updated blog for two of my favourite people in the world . . . Derek (Warhol) and Amy, who blog at TheBearableLight.com/blog and have loads of God-thoughts for church in the emerging culture. Did you know they were married in our back yard in Prague?
The latest article is called "The Longest Article Ever By Derek"

Older people have been accused of trading heaven for retirement. Not always so. Its great to see the exceptions. I have met many retired couples that are traveling around the world to assist what God is doing.
Frank Dietz is an old guy of retirement age that isnt going quietly. I met him about 18 years ago with Operation Mobilization. He has some good thoughts on retirement that i found on an Indian emerging church site called Mahalife.com that gets a huge amount of hits from young people around India.
Frank: "Now after 44 years being involved in preaching and when I came back to my own culture and faced with my peers about retirement I thought for a time that perhaps I made mistake. You see I had done nothing about retirement, I thought.

Congrats to my good friend Rudy who gets to throw a ball in front of millions of people on Sep 28. I suppose thats an honor in USA. Well done Rudy. Enjoy your 15 minutes seconds of fame!

Back from Portugal. I had a fantastic time and you can see some photos . Portugal is a great country. The people are incredibly hospitable and friendly. I would put it on my top 5 favourite European countries. A definite must see. And the people we treated us like kings. I even managed to catch a few waves at the beach.
Other reports: Marc. Reinhold.

The highlight was seeing so many leaders of emerging churches, traditional churches, and missions come together to pray and think and plan. Paulo (the DAWN leader for Portugal) challenged them to start church planting movements across their country. Dr. Jun Vencer gave 3 days teaching on God's redemptive plan. And I taught on emerging culture and what kind of churches are needed. The incredible Aussie band called "RiverTribe were there for a Saturday night concert, and they were good enough to give me some background music for our Tree By The River movement (same one I taught in Japan). There were also some great worship leaders from Portugal.

Thanks for your prayers. We felt like God got what he wanted and the event was highly successful. I taught from the Scriptures on Friday (Luke 8, 10, I Timothy). Marc Van der Woude backed me up with prayer and some strong God-comments during the teaching. So did Kerstin Hack from Berlin, who highlighted the downgrading of women in the Portuguese church and the need to honor what God is wanting to do among the emerging church. That gave some of the young people courage to share from their bruised experiences from church, and their need to be seen by the elderly people.

A few young people working among punk/goth/hippie tribes in Lisbon shared from their heart about not being encouraged or understood by the mainstream. It was very cool to see the older leaders rise up and call them blessed, and to pray for them. As the older were praying for the younger, i asked Barbara, with her hippie clothes and bone-pierced ear, to pray over the older folk, that they might have her eyes, the ability to see what she sees. It was a really moving moment. And thats how we ended up. ONE CHURCH in Portugal, old and young, funky and traditional, pierced and clean cut, all committed to see thousands of new church wineskins for the new wine that God wants in this country that He loves.