« Not Reformation | Main | Is Emerging Church a Renaissance Recapitulation? » 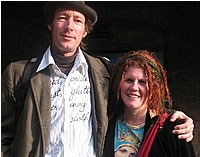 Just another day in the life of the family Jones. Today a freak hail storm popped up and my wife is STRANDED on a remote island called Westray. The windy hail storm was so strong that it blew over one of Samuel's school mates. The ferry home was cancelled due to weather and the possibility of being BLOWN OVER TO NORWAY! So Debbie and Miriam are staying in a youth hostel (only 5 pounds) and are having a great time. They did some praying over there today, and made some new friends.
So i am playing mother tonight and i am thinking about a blog post i wrote over 2 years ago called "5 Trials of a Postmodern Apostle".

The following is a blog entry from September 2002. It was 1-5 of "15 Trials of a Postmodern Apostle". Trails 6-15 are still forming in my head.
The blog was written very quickly and partly in response to another blog post by Iggie called "15 TRAITS of a Postmodern Apostle. the link to that one is broken and i am not sure where that article is.

For the record, and to stop you commenting on these non-essential elements . . .
1. I NEVER use the title "Postmodern Apostle". I was called a "Postmodern Apostle" by Dallas Morning News in 1998 and have been avoiding the title, and both names, ever since the church started bickering about how bad both those things were . . . .[ahhhhhh . . this wonderful family of ours]
2. It has been years since the movie "What About Bob" but basically, Bob was a psych. patient who kept turning up inappropriately at his therapists house.
3. I wish i had avoided using "he" in reference to the apostle. Many apostles in the emerging church are women and i should have said he/she or they . . or even "she". But unfortunately i did not and am offering the original FLAWED version here.

"Wrote these out this morning. Let me know if something needs revising.

1. Back-stabbing
It happened to Paul. It happens today. Apostles start a movement, or a church, and when it is going well they hand it over to an apprentice. The new leader appreciates the ministry but cannot get over the fact that the people still see the Apostle as the hero and founder. That makes them feel insecure. Dang it! They didn’t sign on to run someone else’s ministry. They want their OWN ministry that bears their own name. They put the Apostle down in public, start rumours, and if they are successful, run him out of town.
How to prevent it?
A) Don’t start anything. Let the young people start their ministries and be there at the start to assist them. They will have ownership from the beginning. Neil Cole teaches that the Apostle Paul moved his strategy from starting ministries and handing them over (his first journey) to bringing a large team and helping them start the ministries themselves (his 3rd journey). Good word.
B) If you do start something and hand it over, get the heck out of there and let the new guy run it his way. Choose the right person in the first place - choose by character, not by ability. They can learn skills quickly but character takes years.

2. Thin Wallet.
Travelling is expensive, much more than staying at home. Moving houses costs a lot and if the money is not there, you will be leaving behind large furniture and replacing it in the next city. Changing countries to start new movements (as we have done many times) means different voltage, new appliances, changing cars, starting over again and again and again. Dang that hurts! And it costs a lot. Besides that, neither you nor your wife/husband can get a job in most countries without a work visa, which you probably wont have time to get. That makes you a one income family at best.
What to do?
A) Buy used furniture. If you can’t get your money back, at least you can give it away when you leave.
B) Live economically, stay portable, and don’t get too attached to things, love small rather than big.
C) Marry someone that doesn’t want to be wealthy.
D) Keep your kids away from wealthy spoiled brats.

3. Red-Eye
Get ready for sleepless nights. Praying for people till the early hours of the morning is tough. But when you start travelling as much as apostles do, you can expect some sleepless nights on airport couches, catching 2 hours in a back seat of a car on the side of the road, getting up at 3:30 am to catch your cheap flight. My kids are used to sleeping in cars in between cities, and can now curl up and sleep anywhere.
Solution:
A) Join one of those Gold-and-Diamond, Big-Hair Apostolic Networks, where the Leading Men fly first class and the little people who meet them at the airport pay for them to stay in nice hotels. Learn to accept extravagant gifts from poor nations. Guarantee this treatment for the next Super Apostle by telling them it is the only way to get a famous apostle from a rich country to visit a poor and dirty one. And dont ruin it for everyone by raising up leaders in their own context.
B) If option (A) is unacceptable to you, learn to do what the Apostle Paul did and ask grace to accept sleepless nights, or even to take joy in giving up something for Him. You wont be guilty of raping the Body of Christ for her money. And besides that, God might have something up his sleeve for you in the next life.
“For this slight momentary affliction is preparing for us an eternal weight of glory beyond all comparison.” 2 Cor 4:17

4. Dumb Tax
Someone always has to pay the “dumb tax” in a new situation. You, the apostle, will find yourself in such situations – a new culture, new city, new language. You wont know how to get somewhere the fastest way. You wont know how to save money on purchases. You will look dumb. Most of the time. By the time you figure out how to live a normal and successful existence in that town, you will probably be relocating to your next assignment.
How to cut your payment down:
Hang with the locals and do what they do, eat what they eat. It will save you money. Honest. Let the locals know what you are doing and why. They will tell you where you are going wrong, saving you big bucks and possible embarrassment.

5. What-About-Bob’s
The people you choose to minister too will almost never be the ones you would choose. Movements usually start among the poor, the margin dwellers, the needy, the sick, the dysfunctional, the possessed, the “What about Bobs’ that bang on your door at midnight. It is here that God often kicks off a new movement by doing something extraordinary, grabbing the city’s attention. The new movement initially attracts the misfits, the rebels, those most likely to jump on the new thing. Yes, God changes their lives. But it doesn’t happen overnight.
But wait, you say, isn't the "Person Of Peace" supposed to be functional?
Philippian Jailer? Yes
Woman at the Well? I don't think so.
Legion? Forgetaboutit!!!!! Give me Bob any time.

What to do?
1. Don’t worry. The second wave of people is a larger group and generally more stable. The second wave take their time before jumping in, and they stay a lot longer. They will be the building blocks for the new ministry.
2. Don’t shy away from dark, hurting places. The inner room becomes the upper room. In the Scriptures, the room where the healing takes place became the headquarters and hospitality room for the apostle/prophet (Elijah/Elisha). In Luke 10, Jesus tells his apostles to enter the house, heal the sick there, and then stay in that house.

Just another day in the life of the family Jones. Today a freak hail storm popped up and my wife is STRANDED on a remote island called Westray. The windy hail storm was so strong that it blew over one of Samuel's school mates. The ferry home was cancelled due to weather and the possibility of being BLOWN OVER TO NORWAY! So Debbie and Miriam are staying in a youth hostel (only 5 pounds) and are having a great time. They did some praying over there today, and made some new friends.
So i am playing mother tonight and i am thinking about a blog post i wrote over 2 years ago called "5 Trials of a Postmodern Apostle".