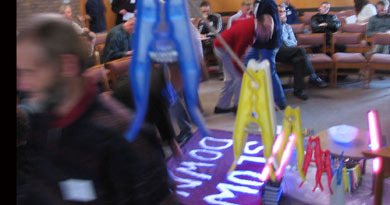 I have to admit . . . the question has stumped me and i dont know how to answer. Are the worship experiences of my life cool? Who calls them cool? Do they need to be cool? Was the wedding feast that Jesus attended cool? Did he make it cool by producing wine? Was Matthew's party cool?

This is me, waking up at 4 in the morning, this morning, every morning since returning from Australia last week, with far too much thinking time on my hands.
This is you, reading my thinkings, even though they are quasimodo (half-formed) and potentially silly.
This is us, in blogland.

The question is raised by a recent article in Christian Century called "The Emergent matrix: A new kind of church?" by Scott Bader-Saye. It is a good article and very fair to what the author experienced at a recent Emergent Convention in Nashville.
QUOTE:
"Despite the undeniable power of these retrieved practices, one must wonder if the incense, candles, labyrinths and all the rest are being retrieved simply because they've become cool" Scott Bader-Saye
"I think the major problem is that you may be rediscovering the ancient as a new gimmick", says Robert Webber in the same article

So are the forms of worship i choose simply cool for coolness sake? Are they gimmicky? But i still cant answer the question.

When God saw all he made he declared it "good". But was it "cool"? Is it the same thing? Does it just depend who is watching?
Is a lettuce cool? Yes, in God's eyes, but then He made it and pronounced it "good".

Was Pentecost cool? Yes!!!! Pentecost must have been WAY cool. And scary. But its purpose was not coolness or scariness.

Was the Last Supper cool? There were probably candles, well, oil lamps at least. But that was not the point. People didn't need to come back the next week, but they DID need to stay in relationship with each other and with Christ.
The Last Supper and Pentecost were failures as examples of how to grow a church by having a cool worship service. Despite a great event, both failed to capture the crowd for a repeat performance. No one came back the following week. But then we have to ask ourselves if God sees public worship experiences in the same way we do.

Perhaps there is a major difference between emerging church and seeker church in this matter. If a worship service is designed to be attractive to newcomers and potential subscribers/attenders, then being cool or relevant would be a necessary part of that process.
But for the house churches and organic emergent churches (and the ancient/traditional/celtic churches also) in which worship is infused into ordinary rituals, or in which there is sometimes no worship "service", then the worship of the community does not have to be paraded on a stage in front of seekers, and doesn't need to be cool or relevant to attract outsiders.
Of course the community itself needs to be relevant. and our message must be understood. Do we then, as a community, need to be "cool". Or is it OK if we maintain lameness, if indeed we came into the Kingdom as lamers and not as cool people.

My blog site is not cool. I could make it cool if i wanted to. In an hour. But i would rather have it be integral than cool - i would rather it reflects me in the state i am in, not lagging behind and not further on, lest i become guilty of false advertising, of presenting myself as something other than i am. Sincerity and integrity overrule coolness in my internet personna.

I do not want to serve coolness (Bader-Saye) but neither do i want to serve the tradition of worship (Webber). My worship should be a response to the goodness of God, to His revelation of Himself in me, to me. If my worship is to be given in spirit and in truth, it will most likely come from the deepest part of me and be communicated with art forms that are mine, words that are my language. If i use the language and tools of another, then the gift of worship may be offered by me but may represent the gift of another. Doesnt God ask for my gift?
If i offer God my worship, in the artforms that i hope will carry the gift, there will be some who see the result as cool, and others who will see it as lame. This will always be the case. And even if my gift is called cool, the same gift will be not cool in 5 years time. Even lamer in 10 years. To attempt a "cool" worship offering is therefore an impossible task.

In the last month, I have experienced a number of transforming rituals. Call them worship services, if you like, or spiritual experiences. They were all quite profound, but i would not use the word "cool" to describe them.

1. The funerals of my brother and father in Australia.
Cool? How could one use that word to describe a funeral? No - they were exceedingly difficult. But the worship was deeply profound and we connected with God and each other.
My Aunty and I determined the funeral proceedings. I was the traditional one, suggesting flowers and wearing of black. She, although 72 years old, was the "emergent" "relevant" one, suggesting that we use elements that had meaning to us and were not trying to serve the church's idea of what should happen at a funeral service. She wanted the song "Daniel My Brother" by Elton John to be played, since she called my dad "Daniel" when he was young. She also suggested the coffin have lotto tickets, whisky and a photo of my dad. I ended up wearing black, but not to be cool, and not to serve church tradition. It was just my way of entering the spiritual environment, of giving my gift, and readying myself for any gift that sought me out.
Cool? Only to some who were watching but not understanding the significance of each element of dress and article. To the rest of us, it wasn't cool, it was just RIGHT. Appropriate.

2. A piercing ceremony in Scotland
Doug and I both endured the life-long fear of losing our fathers. We marked that rite of passage by getting our ears pierced.
Cool? Maybe it was cool, to pierce our ears in Scotland, but to us it was a meaningful, fun, significant, lasting.
Relevant? Who cares if it was relevant to others or not? We did it for ourselves.

But are there people who get pierced just because it might look cool? Probably. And maybe the same people define their worship in the way they choose their wardrobe - thoughtlessly and with servitude to fashion. But i would rather have these people in our midst, where they can learn a better way. A more thoughtful way. A more prophetic employment of fashion and symbol. 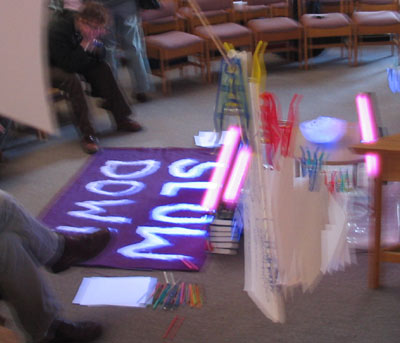 3. A multi-media alt. worship in England. Gareth and Ian M of Moot blog led us in an alt. worship experience. There was video, music, and an invitation to slow down long enough to write something on paper and peg it on a make-shift clothes line.
Cool? Yes, but that was not the point.
Relevant? I suppose. I dont know. I wasnt asking myself that question. Should i have asked it? 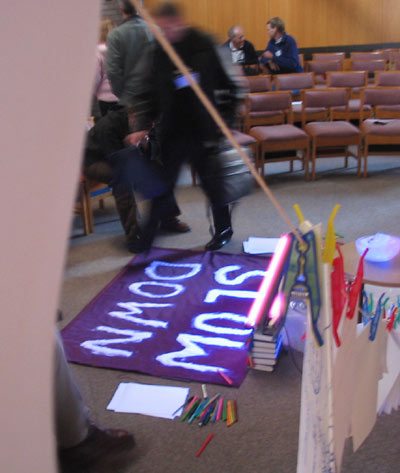 I am guessing by faith, that God thinks its cool when I worship him. Really cool. He might even bring in the angels to check it out .
Do others have to see it as relevant?

OK - heres a partial answer. Others have to see my worship as relevant to me, as does God, because that experience will challenge them to offer worship from themselves that is relevant to themselves. And that is what God wants.

Thats the best i can do this morning. Now if you'll excuse me, i have to start the day.

I have to admit . . . the question has stumped me and i dont know how to answer. Are the worship experiences of my life cool? Who calls them cool? Do they need to be cool? Was the wedding feast that Jesus attended cool? Did he make it cool by producing wine? Was Matthew's party cool?

This is me, waking up at 4 in the morning, this morning, every morning since returning from Australia last week, with far too much thinking time on my hands.
This is you, reading my thinkings, even though they are quasimodo (half-formed) and potentially silly.
This is us, in blogland.