Here are the gory, bloody details of our piercing ceremony, set against ancient stones on the island of Orkney, with tribal passion and primal screaming. Those of you with iron stomachs can read on at your own peril. 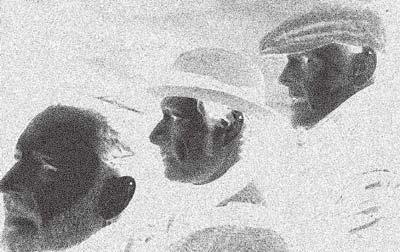 As i mentioned in my last blog post, i wanted to get my ear pierced to commemorate the passing of my father, and the passage of change that i have just journeyed through. Doug also lost his dad and wanted his ear pierced for the same reason. Mark had some other significant reason for his piercing since his dad is still living.
This was our idea. We would pierce each others ears at the Ring of Brodgar, a 5000 year old public meeting place, outlined by ancient standing stones. 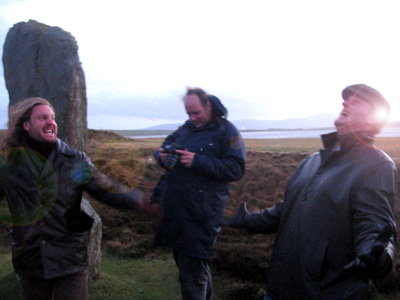 What better place to pierce our ears? We would soak the earings in whisky and nail them through our ears against the stones. 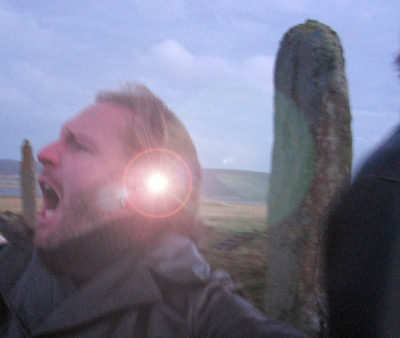 It would be a mystical experience, shrouded in historical memory, infused with spiritual power, tribal and primal, natural and ancient, raw and real. We would be bonded as brothers, united in our bloody experience of pain. 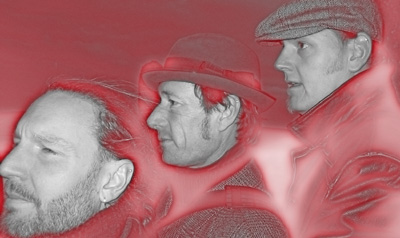 Piercings are serious business. One does not just get a piercing out of boredom or simply for a fashion statement. Ear and nose piercings in Bible times were meaningful rituals - the slave's earlobe nailed on the door as a sign of commitment to his owner, Rebecca's nose piercing to make her presentable to Issac (Gen. 24), the nation of Israel getting pierced by God to make her truly beautiful (Ez. 16) and so on. Thats why we gave so much thought this week to our piercings and their significance.

As it turned out, we were discussing the details of our primal piercing ceremony with a piercing artist in Aberdeen. She strongly advised us against trying to do it ourselves, since the earing itself was exceedingly difficult to pierce through the ear without a gun.
And the upper ear is a little harder than the ear lobe. And it would be dark. And much force is needed. Doug suggested some rusty pliers, but we were envisioning ourselves groping around in the dark, stabbing ourselves multiple times without success, and making mincemeat of our ears.

After much deliberation, we decided to let her use her gun on our ears. We then sailed to Orkney and went out to the Ring of Brodgar, endured the freezing wind and responded with gutteral screaming, and then Doug and Mark sailed off the following day. 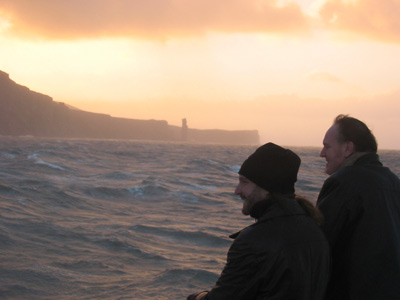 As for the rumor that the shop's name was "Claires", a sissy-girls retail outlet for pink and purple bracelets and little-girly earings, I can only vehemently deny it, with every primal breath within me. And i am hoping that Mark and Doug will deny it also.

Here are the gory, bloody details of our piercing ceremony, set against ancient stones on the island of Orkney, with tribal passion and primal screaming. Those of you with iron stomachs can read on at your own peril.