Message to be Podcast

I will be speaking at Harambee, Pasadena, California next Thursday. Lunch and talk. Topic is "The Emerging Church around the Globe."
Details here. Rudy says he will podcast the 15 minute message. 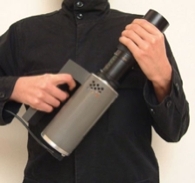 1. Mike has started a blog for VJ's called VJ Village. This guerilla projector is just the thing i need for my next street preaching experience.
2. BetaChurch.org - new in the blogsophere and they are sick of LAME church websites. Good site thats off to a good start.
3. Blogging University open for enrolment at OrangeJack Blog
4. Godblogcon 2005: A Blogging Gathering at Biola. Stacey is one of the speakers. Details at Smart Christian.
5. MUST READ: the story of Wikipedia and founder Jimmy Wales. Thanks BM
6. Email: "Hey Andrew, I wonder if you could let me in on the code for tightening up your side bar text? I have updated to the higher level on typepad. blessings, mike.

If John O'K applied for Cedar

From If I filled in the App For Cedar. John O'Keefe isn't going to send in his application for senior pastor at Cedar Ridge Community Church (currently pastored by Brian McLaren) but it is still worth the read

The Book by Dr. D.A. Carson

Dr DA Carson's eagerly awaited book has just came out. Its called "Being Conversant with the Emerging Church: Understanding a Movement and Its Implications". The book is based on a tape series (Tape 1 and 2) which many of us have been considering and discussing over a 5 month period.  Its no secret that many, many emerging church people feel ripped off and misrepresented by the analysis. I have done my best to get the skinny over the past 5 months - research, discussions, blogs, and even a few emails. A personal response from Dr Don Carson would have been nice, but then he is a busy man. No hard feelings. And he given the American emerging church some valuable warnings and advice.

GOOD ADVICE FROM DR. D.A. CARSON:
- beware of a reactionary nature
- beware of manipulative sloganeering
- don't be reluctant to communicate things in propositional form
- don't project your limited backgrounds on the entire evangelical confessional movement
- recapture the sweep of biblical texts
- avoid sectarianism
- realize that the word "postmodern" is a red flag to many evangelicals
- begin talking about where postmodernism should be confronted

But there is a lot of disagreement and unrest from the emerging church camp regarding Dr. Carson's analysis. This is how my thinking has progressed,  blog by blog, comment by comment. My journey with Carson's material is chronicled in 6 comment-loaded blog posts, each one building on the other, pushing the conversation forward, inviting community response and interaction. It has been an emotional ride for me - and along the way I have shared my feelings, my doubts, my occasional bursts of anger, and my respect for teaches like Carson who have taken the time to give critique.

PRECIOUS MOMENTS WITH CARSON'S ANALYSIS
1.  "I am wondering how to address his remarks without disrespect to him or disunity within the church."
Carson and My Sleepless Night
2.  "I found myself in a weird space, like getting told off by a mean uncle for something bad that one of my cousins had done. Only my cousin wasn't around anymore and I was".
The Skinny on Carson's Emerging Church Tapes

"What threw me for a loop was how so many folks did not equate the emerging church or emergent with being missional" More from Holly.

My Technocrati RSS feed for emerging church is showing me some blogs with really creative names. The best two today were:

Blog in my own eye and And can it blog

I have some appointments in California next week, so I get to road test the beta version of Google Maps which only work in USA. My meeting is with Dr. E.B. Brooks, of the Baptist General Convention of Texas and we are meeting at the Coffee By the Books, at Fuller Seminary. And thanks to Google Maps, I could send him links and images for him to get there. Last time we met, I was really late and the time before that I left my camera in his office. What a clutz!

But if i was a real showoff (which i am only sometimes) then i would send him a Satellite image. Now thats a cool feature!

The first Mass, as the white smoke clears the streets of Vatican City. I am glad the Roman Catholics got a conservative Pope. When i was praying for them to choose the right leader, a conservative Catholic was strongly in my mind. Not saying I agree with all the conservative choices . . . thats not the point . . . I am just saying that right now, a Conservative Pope is what they need and they got it. Wishing them them a great new chapter in their next phase and every ounce of wisdom for Pope Benedict XVI.

Book: Out of Bounds Church?

(ORIGINAL POST) I read a GREAT book in the bath this morning: The Out of Bounds Church?: Learning to Create a Community of Faith in a Culture of Change, by Steve Taylor of Emergent Kiwi Blog. Steve is a baptist pastor, and has completed a PhD in postmodern worship, and he has a really bad haircut . . . at least he did when i first met him in Seattle in 1999. His hair was frizzy and all over the place. He got up at our Young Leaders Conference and added some Native American touches to our worship which was very well done, tasteful, and surprising, considering he is a New Zealander and it should have been the Americans who were adding redemptive analogies from their own culture rather than a foreigner. But Steve is a missiologist and integrates native theology in his homeland also.