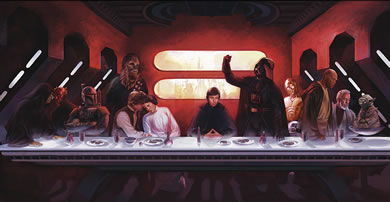 [Image from GiantMag.com] The question of Anakin as Christ figure has come up before. Slovenian philosopher Slavoj Zizek, who is an atheist, has some really interesting thoughts that i read a few years ago in “The Fragile Absolute”.

“First, the Christological features of the young Anakin. If you know the movie you know that his mother hints that she became pregnant with him in an immaculate conception. Then we have the ways in which Anakin wins. It clearly echoes the famous chariot race in Ben Hur, this tale of Christ. Second, the fact that he's identified as the one who has the potential to restore the balance of the Force.

Now, here's my question: Since the ideological universe of Star Wars is the New Age pagan universe, it is quite consequent that its central figure of evil should echo Christ. Within the pagan horizon the event of Christ is the ultimate scandal. Furthermore, what if we take the premonition that Anakin will restore the balance of the Force, not as the faithful misapprehension, but as a correct insight? What if the suffocating character of the pagan universe resides precisely in the fact that in this universe the dimension of radical evil, that in it the balance was way too much in favor of the good?

So I think that that's the solution, that precisely in this sense Anakin restores the balance. It is in order to emphasize this suspension of social hierarchy that Christ addresses in an accentuated way those who belong to the very bottom of the social hierarchy, the outcasts of the social order--beggars, prostitutes--as the privileged members of his new community. This new community is then explicitly constructed as a collective of outcasts, the antipode to any established organic group. Perhaps the best way to imagine such a community is to look at it in the lineage of other eccentric communities of outcasts that we know from past and present, from lepers and circus freaks to early computer hackers, groups in which the stigmatized individuals are united by a secret bond of solidarity. ” Slavoj Zizek, Read PDF

[Image from GiantMag.com] The question of Anakin as Christ figure has come up before. Slovenian philosopher Slavoj Zizek, who is an atheist, has some really interesting thoughts that i read a few years ago in “The Fragile Absolute”.