The Skinny on Rita

Gotta love those Texans. Here's the Skinny on Hurricane Rita that hits the Gulf Coast today.

ASSISTANCE:
- Food -Texas Baptist Men are ready to cook
- Buildings. Baptist churches have opened up.
- Strategic Teams are looking for people.
- Houston Chronicle will show you where to volunteer.
- Ecclesia Houston are on the ground and ready

BLOGS:
EmergentHouston say they have never seen anything like this.
Thisblogisfullofcrap has a big list of bloggers and a webcam.
Hurricane Rita - from Houston Chronicle
Liberty's Blog - from Galverston
BlogHouston
more coming . . .

This came in the email from Expedia about our flight into Houston.

A Prophet on Galveston and Houston

A grey-bearded prophet named Chuck Pierce spoke some prophecies this year, as part of a prayer tour through the port cities of USA.

HOUSTON:
"The Lord then said that Houston would shift in July. "Prepare yourself, for you will influence the nation in a time of crisis."
GALVESTON:
"The Lord also said, "And you will know I'm going to shake Galveston in a way that it has not been shaken since the beginning of the last century. But this is a time for Me to come full circle. And this time, Galveston will begin to run forward into My presence in Houston. And that which is resisting My presence in Galveston will be overtaken. I am raising up the Body in Houston to receive an outpouring of My presence. As I flood the people of Galveston to Houston, I will return them with a flood of My presence. "
From: CONCERNING PORT CITES, HOUSTON, GALVESTON and HURRICANE RITA on Messianic News

Related: On the same site, Cindy Jacobs says the name Rita comes from the name "Margaret," which means Pearl of Great Price. 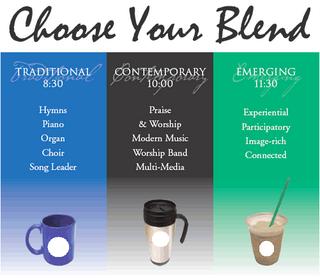 Kyle Potter found this on a website from a church.

What i want to know is this:
- What is in that third cup under Emerging? I bet it is Chai. Fair-trade chai made from cruelty-free tea leaves and NOT purchased from Starbucks. Can I get a witness???
- How can they expect emerging people to get up so early on a Sunday morning?
- What happens when the emerging people want hymns around the organ?
- What happens when the traditional people want to take their shoes off, paint Bible verses on the wall and drink some chai?

Stuck in Houston for the weekend? Praying for your ADSL connection to withstand the storm so that you can blog? . . You're an idiot. . . .but you are not alone. . . and i would probably be doing it with you.
Houston Chronicle says Stormwatchers could use your help. HT: Hugh

1. its much better to let people define themselves with their own words than do it for them which often leads to inaccuracies and personal attacks.
2. There is a lot of good stuff in fundamentalism that is covered up by some ugly excesses . . . and love believes all things
3. Over the past year, the fundamentalists have turned up in the backyard of text-driven blogdom, and many emerging church bloggers are having their first interaction with them - lots of heated discussions and fiery darts coming from both groups. But also room to learn from each other, if we do it right. Time to talk about it so we can move ahead together, as much as is possible this side of eternity.

I may pontificate on another blog post about my days as a wild fundamentalist street preacher, and boast of my youthful, zealous acts for God such as leaving gospel tracts inside Catholic hymnals, and on the windshields of their cars while they were in mass, and preaching through John MacArthur Jnr's "Charasmatic Chaos" at my Baptist church, and rebuking Christians for listening to rock group Petra . . . and also my fantastic experiences in the Word of God that are still with me - hey, i had a really good time as a fundamentalist and really don't hold any grudges. In fact, I still turn up and preach in their churches. But before I write that post . .

Here are some links to start the journey (and you can recommend others)
- I posted "Are "Fundamentalists in the Emerging Church?" which kind of kicked off this series.
- CaptainSacrament has a good post entitled "Facing Opposition: An Open Letter to Emergent Christians" I like his tone.
- Challies, who once called himself a funkdamentalist, posted "The Fundamentals of Fundamentalism"
- PryroManiac is one of the best looking fundy blogs (actually, it beats the emerging church blogs also) and its a helluvalot better designed than mine. Heck - I feel graphically challenged everytime i visit - a severe case of pixel envy! Anyway, this fine looking blog became the unofficial gateway for John MacArthur's thoughts a few days ago under "Recovering the Spirit of Early Fundamentalism."

A to Z of Alt. Worship

K = kleptomania
"Alternative worship “steals” all the time. Borrowing concepts and ideas, songs and visual ideas from the world outside, but then baptising and subverting those ideas."

Abbess Sue Wallace has listed an A - Z of Alternative Worship. HT: Karen at Submergence And if you like them, check out Steve Taylor's A - Z of Emerging Church

Why All the Lights?

why is it always music?
why the same songs?
why only pretty people on stage?
why all the lights?”

Continue reading "Why All the Lights?" »