You have heard it said that:

Now I don't mean to create polarities here, especially between two things that should not be separated. The birth, death and resurrection of our Lord Jesus Christ is at once a historical narrative and a true proposition. In fact, the two could not exist without the other. Preachers who preach "propositionally" also use stories (usually at the beginning, the end, and short illustrations to prop up the propositions) and likewise, "narrative" preachers who launch out from the narrative flow of the Scriptures usually arrive at certain propositional truths. I am not even saying here that one is necessarily better than the other.

But if the emerging church is correct in saying that there is a noticeable shift from a propositional understanding of Scripture that focuses on true statements that need to be assented and affirmed to the sweep of historical narrative of the supernatural Christ event . . . (still with me??) . . then the people who carry that message will probably also reflect a shift. And that shift might be . . . from philosophy to phenomenology.

If this is true, we would expect to see Seminaries shift in this direction also. They are currently handing out lots of PhD's and probably will for a long time to come. But what would happen if phenomenology replaced philosophy, or at least rose up to give it a run for its money? 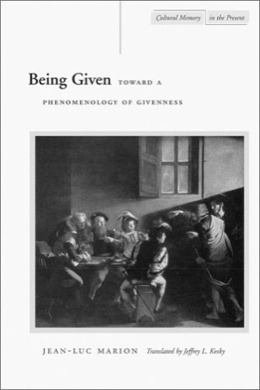 One of the best phenomenologists I have been reading is Jean Luc Marion, a French intellectual who believes in Christ. Marion builds on previous work by Heidegger and Hurssel, argues their limitations, and takes the discipline into a new place where revelation can be discussed from another angle. Marion's best book on the subject is Being Given: Toward a Phenomenology of Givenness, which continues his thoughts from an earlier book, God Without Being.

Which brings me to Peter at Pentecost who is delivering the first official sermon of the new church birthed by the Holy Spirit. As the supernatural phenomena become evident to all, Peter stands and says "Fellow Jews, and all of you who live in Jerusalem, let me explain this to you" (Acts 2: 14).
At that moment, is Peter doing the work of a phenomenologist?

You have heard it said that: