Bible on Your iPod 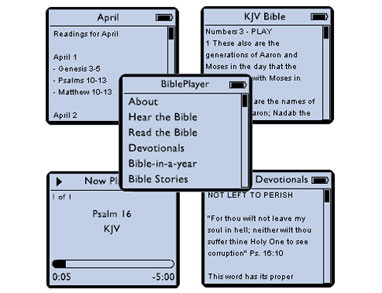 I was just loading up iTunes for my wife and I noticed some software released this year for iPod called BiblePlayer. American Standard Version seems to be the only flavor but maybe more versions are out there. A daily reading plan means you could POD your way through the Bible in 2006. Download BiblePlayer as Freeware from the Apple website. Or pay $20 for a BiblePlayer Deluxe from BibleScreens. The deluxe version has Spanish and KJV, but not my Cuzz's Bible (Net Bible) which is the version I prefer.

In the future, I hope they will add some more versions, and choice of voices for the audio. Anthony Hopkins would be good to listen to. PeeWee Herman for those weird moments in life. Bart Simpson might be popular with my son but his dad would protest. . . a little.

Who's got the longest domain name? 63 letters is the limit for domain names plus the .com which makes 67. Some of the longest recorded web addresses are:


The owners are all very proud of having the longest domain names in the world but you could give them all a VERY BAD DAY by registering the exact name with a .info and beat them all by one letter. I would do it myself if i was a little younger.

I was talking about names with the Europeans this week. There is a Roundtable for leaders of the underground church at Freakstock and some people (Morten from Norway, pictured below) who don't like the name Die. Gefaehrten (German for "The Fellowship"). I like the name because not only was it the word chosen by the German language Fellowship of the Ring movie, but that it sounds funny in English.

I found a website with the longest names in the world and suggested a Norwegian word:

Minoritetsbærerdiffusjonskoeffisientsmålingsapparatur (53 letters), "device for measuring the distance between atoms in crystalised substances."

A lot of people are trying to define the Emerging Church at the moment.
- Freddy does a good job giving Some Words to Clarify The Emerging Church.
- Papa G begins a series of thoughts called What is the Emerging Church?
- Justin Taylor (a Reformed blogger who actually DOES get out and meet people) has just written a short 10 part series on The Emerging Church which is a good place to start. [See links to all 10 at ScottZeller.com]
-Justin is now hosting a new series called "Dialoging With the Emergent Church Movement" Part 1, Part 2, Part 3 Part 4. Your dialog with Justin would not go wasted.
[UPDATE] Phil at BaldBlogging is doing a series. Jump in at No. 8 and work backwards.

I gave it a shot nearly 2 years ago at the request of a magazine, resulting in What is Emerging Church? A year earlier, I had done the same for a UK mag. I didn't have a lot of success but I responded with Emerging Church Definition 1, 2, 3, 4 and additional thoughts. I have also blogged some thoughts on the emerging church, including: Emerging Church Vocabulary, History and Criticism (2000-2004)

- Someone wants my opinion on Jeffery Jue's paper "What's Emerging in the Church?" but it seems too far removed from my world and my conversations to devote any time to it. Jeff was recently quoted on emerging church by the Philadelphia Inquirer, which was picked up by EmergentVillage.

OhhhYeahBabyUhHuh!!! We just got ADSL connected at our new apartment. OhhhhhhYeah. Only 1 Meg this time because I was too cheap to fork out for 2 Megs. So . . . instead of blogging from the local library or the neighbours computer, I get to blog from my Mac Mini, write the blog posts on my blog editor (Ecto) and datamine the world with my own NewsReader (Netnewswire Lite). And my movies and images are only a click away. Can't tell you how good this feels. Its the virtual equivalent of coming home to a warm fire, putting on my slippers, and drinking a hot chocolate.

We are celebrating the USA Thanksgiving on Thursday - I will be in the kitchen and I refuse to blog. Our kids, most of whom were born in USA, are really excited about it. Normally we throw a big party and invite the whole town, but since our apartment above a restaurant doesnt have the room, we are just having a few families and some young people. I will be wearing my apron and tasting the goods. -  free range turkey, sweet potato and cranberries.

Blessings on all you Americans - both white and Native - thinking of you today and eating your food.

Best Book on the Emerging Church

The book is finally out in USA. Brits need to wait until Feb 06. Its called "Emerging Churches: Creating Christian Communities in Postmodern Cultures" by Ryan Bolger and Eddie Gibbs. I read the manuscript 6 months ago and spent quite a long time on the phone with Ryan. I am really excited about this book and am glad its finally released. The reason this is the best book on the emerging church [so says my endorsment on the back cover] apart from being true [Jonny agrees] is because my own book on the subject - a thrilling, masterful, penetrating analysis and breathtaking sweep of the global emerging church in all its glorious potential for saving the planet, at once sensational and penetrating, glorious and sublime, "a Ken-Follet-meets-Luke historical whirlwind that will convert both WillowBack roadies and the skeptics on Fundy Row" -  . . . has  . . . ahhh . . . not actually seen completion.

So in the meantime, while you wait for my book, Eddie and Ryan's book will suffice. In fact, it will also open your eyes and introduce you to key people that you have not met. Brits will be happy to read previously unpublished history of NOS [Nine O'Clock Service] from the 80's and Americans will see that the emerging church is a lot bigger than they had previously thought.

I know most of the contributors, but not all of them. About 50 people were interviewed so many of us do not agree with everything that is being done or said that is currently going under the "emerging church" label. In fact, I think i am the only one in the book who says that the history of EC goes back to the 1960's countercultural movement. But . .  hey . . always good to have multiple perspectives when tackling a huge subject. And I think my historically dissenting voice makes it into the final edit [dont know because the publishers have not yet sent me a copy, despite late night phone calls with Ryan]

Very cool also to have people like Andy Thornton (Glasgow's Late Late Service in the 80's, Greenbelt Festival Rescuer in the 90's) give their thoughts and memories.

Kiwis, Aussies, Asians, Continental Europeans, and Latin Americans looking for the story of their country's emerging church scene to be told with passion, equity and justice will just have to wait a little longer for my book.

Or . . . a quicker solution . . you might find some of your own countries em. church stories on a Lausanne Occasional Paper. Co-author Ryan Bolger took part in the 2004 Forum hosted by Lausanne Committee For World Evangelism. Ryans group, led by Wilbert Shenk (his previous boss at Fuller School of World Mission) came up with an Occasion Paper [No. 42] that you can download and read:  The Reality of the Changing Expressions of Church (PDF). The paper lists 23 different expressions of emerging church on page 50 and gives some good stories from all continents.

BONUS: Eddie Gibbs made available a paper called The Emerging Church(doc). Eddie also reviewed D. A. Carson's book "Being Conversant with the Emerging Church" for Christianity Today with an article called "Emergent Solutions - and Problems"

There is a house next to the youth hostel in Stromness that we are trying to get. Tomorrow is the last day for bids. Someone in the town has offered to buy the house (since we have no money and cannot get a mortgage in UK) and let us use it for the time being, with us paying the interest and council tax.

Its a great 5 bedroom house but has not been lived in for 15 years. It will need a lot of work to get it livable, but we would like to give it a shot.

Offer goes in tomorrow and we should know by Friday. If you have been following the story, you will know we have been looking for a year and haven't got this far until today. Quite exciting!!!

We were originally thinking of a monastic setting outside the town, but feel better about this scenario - an urban monastic center that is decentralised so that we dont have to buy all the buildings. Having a hostel up against the house and a hotel and pub about 10 feet away will allow us to function like a monastery/pilgrimage centre without having to buy one. Anyway, appreciate prayer for God's smile on this one . .

Just Announced! UK National Gathering for EmergingChurch/Alt.Worship/FreshExpressions/Whatever [Whats the difference?] 100 delegates ONLY so you may want to get in quickly. Jonny Baker has more info or read on for details. . .

ALSO: The final BLAH for the year is Dec 7 in London. I am planning to be there on my way to some meetings in Zurich (Dec 8-10) Jonny also has the details on BLAH

But here is more on the Manchester event . ..

"When we make Jesus timeless we make him useless."

John Frye, "Jesus The Radical Pastor" who is doing a series on Jesus:

Good stuff, John!. And thanks Bill Kinnon for recommended it. Might be in the running for best blog series of the year. Londoner Kester Brewin has also written of the emergence of Christ into culture in his book The Complex Christ, one of the best books on the subject of Emerging Church.

Mistake. Did I say yesterday that Boars Head Tavern was reformed? OOoppps. I got it confused with the other virtual pub . .  . White Horse Inn. Apologies to BHT for calling them reformed and to White Horse Inn for saying they support the emerging church. I dont think D.A. Carson would call himself a "supporter".

As for Boars Head Tavern, i should reassure you that their post-reformation status is still intact and there is a badge on the left hand column declaring "Not Approved by the League of Truly Reformed Bloggers", as well as a page saying why. Although, just for a moment, Michael Spencer did give some thought as to how they could all morph into WHI broadcasters . . .

"So If I am Riddlebarger....Kurt would be Ken Jones....Josh would be Rosenblatt...and who gets to be Mike Horton? :-) An honorable error. I'm flattered. The WHI, otoh, may sue." Link

And apologies to the White Horse Inn for disturbing their Sola[ce] and trampling in their TULIP patch. WHI's Michael Horton and I have had a good clear communication about our differences after some banter on the blog and I can assure the WHI listeners and readers that they  have not budged at all on anything  . . . .  not for 488 years and 20 days actually . .  but thats another topic. [Hi Michael!]