ahhhh GASP!!! coming up for breath!!!

i have been travelling all over england and scotland and have not done well with finding internet access. one internet station at the Glasgow bus station banned my site and typepad as well.

I am staying tonight in Dingwall, near Inverness with Dave. Home tomorrow for Elizabeth's birthday.

I'm off to Aberdeen tonight. London on Thursday, Sheffield for the weekend. Comments will be held until i can approve them because of spam. Peace out!

- Our thoughts are with Reinhold Scharnowski who lost his father yesterday to cancer. He was 79. Shalom.
Its been just over a year since my dad passed away which was devastating . . . but writing some poetry was therapeutic for me. 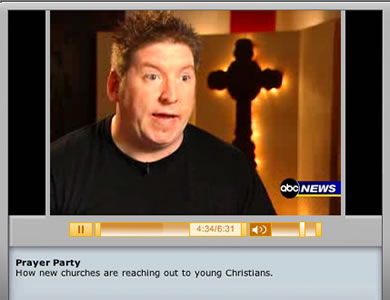 Great to see some friends of mine making the ABC news. 2 churches were highlighted:
Bluer (thats John Musick with his stunned deer look) and Spirit Garage which i visited back in 1998. Brian McLaren adds some wise thoughts to the ABC report. 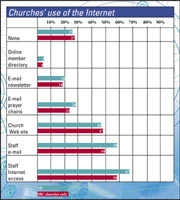 "Presbyterian churches, at 92 percent, are the major denominational group most likely to be using the Internet."
(LifeWay Study, BP News)

Its Another Andrew Jones

Top Ten Trivia Tips about Andrew Jones - Its not about me . . . I swear. Someone else out there has stolen my name. Which reminds me, I was thinking about writing a book about my top baseball secrets. Do you think it will sell?

A Refuge for Lurkers

Last week was Delurking your blog week, but Lurkers (non-posting blog readers) were safe on this blog. No pressure to OUT yourselves at all.

This is my repentance for the Forced De-lurking that I started back in 2003 when I exposed Darrell Dement as Lurker of the Day. He was a good sport, and so were the others after him. But now I have lurkers from countries all over the world, some countries more closed to public discussion of religion than others. And if lurking without getting publicly exposed (either voluntarily like Jordon or forced) means keeping their heads on their shoulders, then I am not about to start up the habit of de-lurking again.But if i did start up the habit again, there would be some great images to use.

Tom Sine debuts his blog today. I remember bugging him about blogging on many occasions. Great to see he has finally relented. Tom and Christine Sine are superstars in the Kingdom. Tom will be online today at 1-2pm PST as part of the Church Has Left The Building Conference build-up. I will put a link to Tom's Blog when he announces it.

EarlyatDawn.org (beta) is open. Its not pretty, but its THERE. This will be a blog for missiology, strategy and updates on church planting movements in Europe. I am on the blogging team, along with others in the DAWN Europe Team. I hope to start a small series this week on the impact of Missio Dei on todays emerging-missional church.

Friday's debate (20th, not 16th as i said earlier) between Bob DeWaay and Doug Pagitt has me wondering whether Emergent has gone troppo.

After reading the harsh critiques against Emergent, one gets the impression that attending an Emergent Conference is like watching an episode of Lost: a group of disoriented misfits going troppo together, constructing unsafe buildings and having no idea where they are . . . despite the deep mumblings of a bald man.

But one of those things might be true. It is quite possible that Emergent has indeed gone Troppo . . .IF . . in fact, we are referring to Tropological theology.

Paul Hiebert speaks of the doxological or tropological theology that "is done in the context of worship, and stresses the mystical, sacramental and iconic nature of truth. The key question it addresses is, “How can we comprehend complex, transcendent truths about God and reality that lie beyond words, logic and human reason?” It uses nondiscursive signs and tropes such as icons, metaphors, types and parables to communicate transcendent truth." (Paul Hiebert, Spritual Warfare and Worldview, p. 167, Global Missiology for the 21st Century, ed. William Taylor)

It is probably this addition of tropological theology that Bob DeWaay will attack in tomorrow's debate. [Doug has released a book called Body Prayer] But tropological theology is found all the way through church history. "Augustine suggested a four-fold sense which would later be adopted by medieval theologians: (1) literal; (2) allegorical; (3) tropological or moral; and (4) analogical." Theology Adrift, Bible.org

Paul Hiebert says more about Tropological theology as an addition to systematic, biblical, and missiological theology.
"Tropological theology is doxological. It is not an abstract reflection on the nature of truth for truth's sake. It sees theological reflection as an essential element of worship. Christopher Hall (1998, p. 67) writes, "For the [early church] fathers, the Bible was to be studied, pondered, and exegeted in the context of prayer, worship, reverence, and holiness". Tropological theology is also tied to the character of the exegete. . . . one cannot trust a brilliant scholar if he or she is arrogant, unfaithful, impatient or deceitful." (Spritual Warfare and Worldview, Global Missiology for the 21st Century, ed. William Taylor)

New header today. I took the image a few months ago while driving through the not-so-interesting state of Idaho. Can you guess what candy was sitting on my dash?

Our daughter Hannah turns 7 today. She has 2 friends coming over for pizza and we are all going off to see Narnia at the movies. Hannah was born in Humbolt County, California, Jan 13, 1998. Cant remember if that was Friday the 13th or not.