A new missional order and network announced by leaders of Allelon. Alan Roxburgh describes it in this article as a multi-generational movement of missional leaders. This sounds like a continuation of the discussions we had in 2004 at Fuller with Alan and the Allelon group.

i LIKE this group and i LIKE Alan R. This would be a great order to be a part of.

what i would say to the young american emerging churches

what would i probably say to young (north) american emerging churches? in this present climate of constant criticism? maybe i am scribbling this more to get something off my skinny chest before the day begins, but there might be something worthwhile in there.

"I have been listening to the latest wave of criticism against the emerging-missional church in USA and I don't know if i am more angry with the critics for getting it so wrong, or angry at emerging church practitioners for either not communicating the heart of what we (the global emerging-missional church) are doing . . or not knowing it in the first place.

The emerging church, if i listen to the more extreme critics, is just about changing the style of church to attract people and keeping them happy, of accepting any wind of doctrine without critique, of finding the coolest hippest trends and adopting them in a sunday service. Of being postmodern to attract postmoderns. Of careless adoption of any ancient practice regardless of its origin or affect, of finding identity in protest against the Modern, Enlightenment or Constantinian models of church.

What the heck is that? What does that have to do with the emerging church? If there are one or two new emerging churches who have lost the plot, or never saw it clearly to begin with, and are now giving the other hundreds of emerging churches a bad name, they should be lovingly confronted with the better way of Jesus. Do it yourself before other traditions do it for you. A little yeast impacts the whole lump.

Heres a PDF from Ian Nicolson of 24-7 Prayer. He says there is a Big Conversation in Belgrade May 19-21

Scott from EMRG tells me that have just updated their numbers on Europe spiritual condition.

Roundtable this August in Germany called Die Gefaehrten. 50 emerging leaders of underground ministry networks are being selected from around the world. Let me know if you think someone you know should be there. Initial website has gone up. I will be at this one. Underground Railroad is involved. So is Freakstock.
Flashback. A decade ago, when i was doing ministry in San Francisco among postmodern subcultures, there was really only ONE global network for emerging church that i was involved with, and that was Underground Railroad. Now there are dozens.

"aradhna means worship: the group captures the beauty and dignity of india’s bhajan devotional melodies with music that blends east and west" (From the Aradna website. Check out this video and see what i am talking about.)

My Aradhna (Satsang) CD finally arrived. Let me complain a little here. Apart from making me BUY it (how rude - i normally receive CD's free) it took far too long to arrive (its a belated Christmas present) the recording is poor, there is no meta-data for iTunes, their online shop did not recognise the United Kingdom and the actual recording is based on a mishap. Apparently, they were recording the final night of a tour for a CD and a 3 year old child kicked the cords and they lost everything. But they felt God wanted them to continue so they played to those in the crowd that wanted to stay . . thus . . this album called Satsang.


Having said that. The CD is absolutely incredible and curry nights at our house will never be the same. I also think you should buy it. In fact, if your music collection of worship songs does not include at least ONE Aradhna CD, then it is indeed one tuna casserole short of the potluck.

I took this picture at Greenbelt Festival last summer. The other bands were raving about Aradhna and I had to hear them for myself. Mike of RiverTribe, who has blogged about Aradhna, was the guy who told me to see them. Since then, other friends in my world have told me about Aradhna coming through their town (Barb in Lisbon, Linda B. in San Francisco) Jonny Baker had also mentioned them.

Anyway - a great band with a great missiological philosophy on why indigenous patterns of local worship are so important to God who does not want the whole wide world to be Maranathaized or Hillsonged out of recognition.

(Email from a SBC Pastor regarding this controversy)
"Andrew, . . . You pointed to the SBC controversy with baptism and speaking in tongues policies in the IMB on your blog a while back. I don't know if you have kept up with this any, but it is really heating up and is being driven by blogs (especially Marty Duren at sbcoutpost.blogspot.com. The trustees of the IMB pushed ahead with their agenda, but a trustee named Wade Burleson (pastor from Oklahoma who was the former state convention president) opposed them. They thought that they could just overpower him, but he started blogging (kerussocharis.blogspot.com) and exposed what was happening to the larger convention.

Continue reading "Blogging and the SBC/IMB" »

The cycle starts again today on Our Daily Blog and will go for another 40 days.

"Whereas the heady polarities of our day seek to divide us into an either-or camp, the mark of the emerging church will be its emphasis on both-and."

More discussion about tags and categories and a little TallskinnykiwiNo going on at Glorious Caustic Conversation. [hey, kids . . get off my back lawn before i come over there and HIT U WIT MY WALKIN STICK!] Maybe my way of blog organization is old fashioned. I dont know. Read my argument in the comments.

BTW - I am using ONE category on this blog post and about TWELVE technorati tags - all attached effortlessly and within seconds with ecto blog editor that lets me assign both typepad categories AND technorati tags AND keep them seperate. That means technorati handles the chaos and not me. That seems smart. Why do i want all those categories on my blog? What do you think?

I think young bloggers should listen to their elders, regardless of how old, crusty and stuck in their ways they may be . Start with my post on blogging.

Technorati Tags: blog, bloggers who dont know what they are talking about, bloggers who owe me coffee, categories, Glorious readers who think i am lame, people who complain about andrew jones, tags, tallskinnykiwino, web 2.0, young bloggers i am going to hit with my walking stick, young inexperienced bloggers who need to listen to their blog elders

Emergent at Yale and Masters

Emergent Conversations have been going on at both Yale Divinity School and Masters Seminary. Never expected to see both institutions in the same sentence.

At Yale, students were interacting with teachings by Miroslav Wolf. Yale Daily News captured the moment and there was some negative Catholic response who someone who wasn't impressed. Bloggers Jason, and Cleave WERE impressed enough to write notes and there is more at Faithasawayoflife,

At the same time, Masters Seminary are doing a series on the Emergent Church. John MacArthur Jnr has been describing the emergent church as the 3rd wave of movements that threaten our clarity of the Scriptures. The first two waves, according to MacArthur were the charasmatic momement (which he tackled in "Charasmatic Chaos" [see also Vineyard Response to Charasmatic Chaos .pdf, and this letter]) and the Seeker Movement (which he confronted in "Ashamed of the Gospel").

BTW - cant find any bloggers from Masters who have their own thoughts on this or their reaction to the professors at Masters. Anyone help? And not only this, but I have not been able to open all the audio files on my Mac. Must be a PC-Window's based audience.

The third wave, says MacArthur is the emergent church movement that he characterizes as believing the Bible is "hopelessly ambiguous" and avoiding debate with anyone except people like himself -who apparently - are the only people true to the Scriptures. [I feel a third book coming on] MacArthur believes the main threat comes from a lack of clarity regarding the Scriptures - that the Bible has never been clear (his take on MacLaren) or is only NOW clear (his take on N.T. Wright) rather than a MacArthurite Absolute Clarity, as expressed when in states in his presentation . . .
"We have the mind of Christ, We know EXACTLY how he thinks!"

John MacArthur Jnr says the two most popular emerging church books are Praise Habit: Finding God in Sunsets and Sushi by David Crowder and Faith of My Fathers by Chris Seay. I haven't read either of these two books (had not heard of Praise Habit) but I know the authors well from previous encounters at their old church. David was the worship leader at Chris's church in Waco. Both great guys. They are both connected to the Baptist General Convention of Texas (moderate) and not the other more fundamentalist baptist stream so sides have already been drawn in this debate.

I leave in a week for Johannesburg (18-24th at Kopanong Conference Centre) and am preparing some presentations - including a 15 minute powerpoint on the emerging church in Europe.

Did you know .. .
- The world wide web was invented by a European (Tim Berners Lee) who described himself as an "Englishman working in Switzerland"
- 28% of the worlds internet users live in Europe. (Internet World Stats, Dec 2005)

Vizrea was "unstealthed" today and makes a splash on the Seattle Times. From its humble beginnings in the basement of our nu-monastic-community in Prague (the Giant Peach) to the computer screens and fancy Symbian-based phones of the world, Jarda's software, which became a joint Czech-USA project, has eventually been released. I am very connected to this software and will be using it WHEN it recognizes the MAC community and financially-challenged bloggers with old MMS phones. 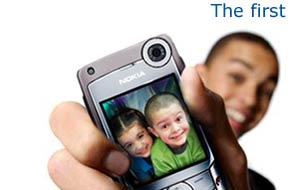 The story of this software starts nearly 4 years ago in Prague when my good friend Jarda read a post on my old blog mentioning my desire to post images directly from my phone. Jarda, having left his Microsoft position, and giving some leadership to the Czech web portal Atlas, moved his office into the Giant Peach (our community) and got to work. Heres a short timeline with links to my old blog.

May 2002 - Jarda promises me some phone-to-blog software.
Dec 2002 - Jarda is working out of the basement in our house on his phone-to-blog software that is going to be called BlueLog.
May 2003 - Someone beats me to be the world's first phone-to-blog blogger. Dangitt!!!
June 2003 - I write "I also want to use my mms phone more but am still waiting for the right software to get developed."
2004 - Jarda hooks up with some old Microsoft buddies from Seattle.
2005 - I get an email from Jarda. "Hi Andrew, Andrew, Andrew :))))) Sorry, that it tooks three years and more to finish my promised blogging engine :))"
2006 - Software is eventually released as Vizrea Snap for the PC. Some say it will challenge Flickr.

Jaroslav (Jarda) Bengl is a great person, an avid photographer, a devoted follower of God, and a Geek par excellence. He is a considered the "father of the Czech internet" and we are very proud of him and his mates from Seattle. But here's the thing - Vizera doesn't work with Mac yet so I still cant use it. I also cant use it with my OLD Sony Ericsson T68i phone. That means, dear Jarda, that you are still not off the hook. Get back to work, dude!
HT: Alexandr 'Sasa' Flek (Jarda's spiritual advisor)