Writing for a Commentary

Don't disturb me. I am writing an essay for a commentary on Acts. My slice is 10:1 - 13:52 which i see as the hinge of Luke's account - its where the deep transitions of the Christian church take place - Jew to Gentile, Peter to Paul, Jerusalem to Antioch-Pisidia. One of the themes for the whole book is that of the apostles "wiping the dust off their feet" in protest to the Jews who did not receive their message. What was unique to that transition and what parts of that are played out today?

If you have any strong thoughts, or links to articles that might help me, please let me know. I find it hard to write articles and essays, but easier to write blog posts .. . so i am writing it in my blog editor and pretending its a long post. But that doesn't mean that it will be blogged here, because it wont.

BTW - did you hear about the Irish lass who came to church pushing a wheelbarrow full of sweet potatoes? Her pastor asked her what they were for. She replied, "Dere fur you . . . yer always complainin' aboot da common taters!"

"Do we ask enough of them?"
"Hamo asks some hard questions about youth ministry.

It finally happened but not as I predicted. I said that Jordon Cooper would take my place, since he was dragging just behind me - and in fact is only one link from overtaking me [please . . someone out there give a permanent link to JordonCooper.com and put me out of my misery].

But while Jordon has been threatening to take my crown away, a relative newcomer has scooted passed us both. After a long and glorious ride at the top of Technorati's list of emerging church blogs, I have been most triumphantly unseated by Scot McKnight's "Jesus Creed". 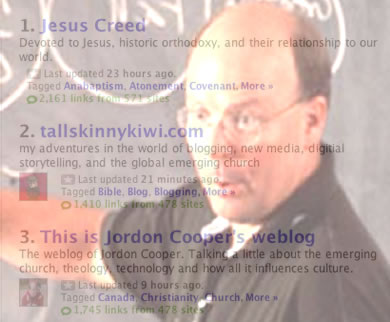 Imagine having an AMERICAN with the leading emerging church blog! What does this say? Is the emerging church ALSO in USA? Are they really catching up to the other countries? How will the nations deal with this? The head spins . . .

Abdul Rahman is saved from the chopping block. Much protesting on the streets of Afganistan today. His arrest came one month after a Bible was discovered in his possession. Authorities say he his "hearing voices". Yahoo has the skinny.
Interesting how, among the all of the Christ followers killed each year, that one of them gets singled out and makes the press. wonder whatz up wit dat?

The Laser Monks are a 75-year-old Abbey of the Cistercian Order in Wisconsin who refill printer cartridges to cover their expenses, instead of making cheese or beer. HT: BoingBoing. I am always interested to see what products the monasteries, both old and nu, are coming up with to support their ministries.


RELATED: Monasticism in the 21st Century

UPDATE: 29/3/06 This post has been changed. The original post said that Xianz was a tool for Christians only - but someone commented below that non-Christians are also allowed membership. I checked into it futher and the terms and conditions say "The goal of Xianz.com is to provide an interesting, stimulating, and fun place for Christians and other Internet users". So as far as I know - non-Christians are allowed to join (provided they get an invitation). My apologies to Xianz. And my apologies to bloggers for editing it without strikethroughs, and then losing the original text.


Xianz is a Christian version of Myspace, a new blogging system and social networking system for Christians.

It doesn't appeal to me. One of the GLORIOUS things about blogging is that is gives people the opportunity to open up their lives for others to see . . . like Daniel who prayed with the windows open. Its a little more risky, as Daniel found out, but the impact is much greater. If you have a life worth sharing, then publish it for the world to hear and join the conversation with everyone . . and i mean co-Xianz, non-Xianz, pre-Xianz, post-Xianz, quasi-Xianz, anti-Xianz, and all who see Jesus in your life.

Visitors From Other Counties

I just installed a Neoworx counter that tracks which countries my visitors are coming from. Interesting that of the 47 countries that turned up [ . . THANKS . . . ] Sri Lanka had the second largest number of visitors, next to USA.

Here is a PDF file of an emerging church interview in a Swiss mag. Thanks Lukas for sending this.

Nice of them to include my family in the article. We have tried very hard to minister as a family and its good to see that valued by others.

RELATED:
- I will be back in Switzerland soon. I will be at Romanshorn am Bodensee May 4-6 for "Congress For Church Innovation" and in Geneva May 9-10 for an Emergent type gathering called "Divergent".
- Previous trips to Switzerland.

Its Sunday - the day I do not blog - but my wife has gone to see a movie with a friend as a mothers day treat, and i am left alone here with the family. . . . and my computer.

My thought for the day. According to some research I am currently involved in [buying old books on ebay], the "missional" emphasis of the emerging church may have its foundations in Reformed theology. This will be interesting news to some, especially to those who feel [wrongly] that Reformed thinking is diametrically opposed to missional thinking. I might be wrong, but I think Reformed thinking was one of the brightest sparks to ignite it. Heres what i am thinking.

The watchdog blog Fide-o recently called all Emergents to collect some statements on what the emerging church phenomenon was about. Unfortunately, I was traveling at the time and internet-less when I arrived home to a new house without a connection. Even worse, the statements collected and commented on a few days ago on the post "Because I said so" were not very good and certainly not enough to convert anyone from a Constantinian model to something more emerging-missional. A few days ago I left a contribution in the comment section on that blog post but it hasnt appeared yet. So I thought I would post it here, along with a short explanation.
[update: they told me there is a problem with comment moderation on Blogger accidentally deleting them. Comment control was one reason i left Blogger for Typepad. Hey - thanks guys.]

"The Emerging Church Phenomenon has placed a renewed emphasis on the sovereignty of God in the area of missions - in particular a focus on the Truine nature of the missionary God, His attributes as well as His actions as impetus for mission, and the incarnation of Christ as a model for a biblical, holistic missionary encounter with the emerging culture."
Andrew Jones, ignored comment on Fide-o blog."

BTW - Why is the DOG analogy so popular on Reformed doctrinal sites? Maybe its because dogs guard existing spaces while cats explore new spaces. I think I prefer cats. Cats seem more apostolic than dogs. More adventurous. More curious. But why create another division - who wants to see dogs chasing cats around anyway?