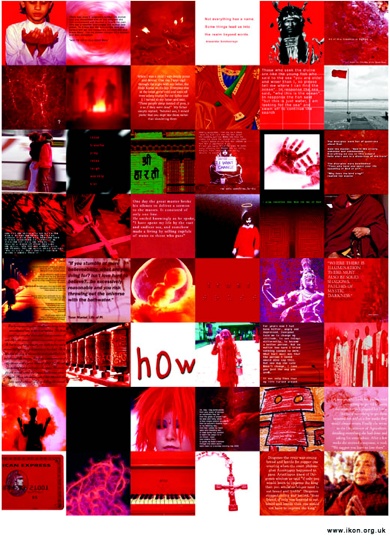 Pete Rollins and the Ikon team will be showing a dissolving art intallation. Its called "One Colour Red" and it starts March 28 in Belfast. (HT: Jonny Baker who will be in Belfast next week to witness it)

Dan Wallace on Truth and Text

"What I tell my students every year is that it is imperative that they pursue truth rather than protect their presuppositions."

My "cuzz" Dan Wallace at Dallas Theo. Seminary has some really interesting things to say about textual criticism in a recent interview. (HT: Blind Beggar)

I get to play VJ tonight at a dance. I am still using Arkaos after all these years to mix and perform the video loops.

The occasion???? Miriam is our Land-Rover-driving neighbour who moved a few houses down from us. She is also the vocalist for the band Ragstone 27 (see my video of their first performance). Miriam is a dear friend and a spiritual woman who often finds herself on prayer journeys into all kinds of countries. She gives a lot but doesn't usually end up on the receiving end of the gift-giving cycle. A bunch of us celebrating Miriam's birthday with a dance (Ceilidh) tomorrow and, although she doesn't know it yet, I will be the VJ. A little sample below of the video loop. [QuickTime Movie (2.2 Megs] 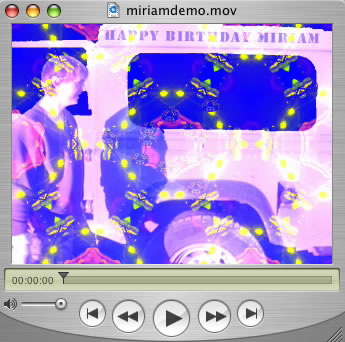 A recent blog post has got me thinking. Its called "The Emergent Elijah" by Dave Green of Preterist Cosmos. It came to my attention because it was highlighted recently by one of my favourite artists who has provided a soundtrack to my life for nearly two decades. I found it on a post by artist Steve Camp who now blogs, thus making him more human and on occasion, more accessible than when he was just a performer. Debbie, my wife, grew up in the Californian Christian scene and she says Steve Camp (she calls him 'Barney Rubble') was always around the big events.

Steve Camp, if you are new to the faith and scene, is the Christian music artist who introduced the mullet to American evangelicals in the 80's (a fact that Wikipedia will not tell you) and remains a hair guru today, as well as a musical hero. In fact, even as i blog these words, my iTunes is pumping out "He Covers Me" and the song coming up after it is even better - "He's All I Need". His "Fire and Ice" album gave me the soundtrack i needed for a series of messages/dramas for a big youth camp in Australia. I actually saw Steve Camp once at his concert in Portland, Oregon back in 1989 and have been trying to grow a mullet this year to prove my allegiance. I am a fan. Really!!!
BTW - I believe the Biblical figure Mordecai had a mullet and I can mostly prove it.

Gideon??? I don't think we know what hairtstyle he would have preferred but a question to ask is . . . what would a Gideon do today in our emerging culture about Baal worship and our pagan-based festival that we have named "Easter." Here is looking out our bedroom window from our new house up above the post office. You can see the ferry and the Pier Arts Centre getting rebuilt (left) which was originally built by my great-great-great grandfather, Edward Clouston.

I installed an old wood stove to get some old fashioned heat in our house - not to mention some FREE HOT WATER for my large and luxurious baths where i do most of my theological reading, but alas, there was yukky smoke billowing out of the chimney.

So yesterday I did the chimney sweep thing with a special set of brushes (Debbie wanted to play the song from 'Mary Poppins'). A whole bucket load of dirt and bird's nests came out. This morning, I had to sweep down a brand new nest. Bloody birds have declared war on the Jones family. Anyway, this is me. Coal-faced!

Ohhh yeah - internet is back on . . . Getting broadband is always a blast, no matter how many times you get it installed. Consider me back in the land of the linked.

It happened yesterday. Hackers got Windows working on an intel based Mac. The rest will be history. If you are lucky enough to have an intel Mac, you can download something here.

Still waiting for internet at our new place. All is well in our house. Blogging is on hold until our connection from on high takes place.

Sorry for blinking off the face of the planet!!

I got back from England to a new home. We moved on the day i left so it was nice to actually SLEEP a night in our new house. We were renting, as you know, a small flat above a resturant. But now, having been upgraded in all things domestic, we live above the post office in a larger house. Still only one bathroom, but much higher ceilings.

So, I am busy getting the family settled in and hooking up appliances. No broadband yet so we will not be hosting any of our broadband-based adventures (like Suddenly Seminary virtual chat room) until we get some speed going - maybe 2 weeks from now.

Its been Freezing here but things are warming up.

Its a little over a year since my dad passed away in Queensland, Australia. You may remember my poem from that day. Today (already Sunday in New Zealand) my Aunty Olwen is taking his ashes to Orewa Surf Lifesaving Club where his friends will have a morning ceremony and a time of remembrance for John Daniel Jones, the old, short, skinny kiwi, who lived a full life from April 16, 1933 - Dec 2004. Dad loved the surf club. And he loved us.

Thanks Olwen for being a great sister to him and aunty to me.