I have an article in September edition of Worship Leader called "How To Write a Blog Post". If you read it and have some questions, leave a comment below.

Just spent two days in Wales - visiting relatives, viewing the house my grandfather was born in [more on that later] hanging with my Aunty Olwen, and chatting to Welsh hymnwriter Morgan Lewis who is now 93 years old and still in love with Jesus.

Great time. Photos coming. In Bristol now but will spend a night at Ashlee House, my favourite London hostel tonight [£12] and will fly home to Orkney tomorrow.

My daughter Abigail turns 11 today. She blogs at gabigail95.bebo.com. Go to her bebo powered BLOG at Gabigail95.bebo.com [bebo rocks and totally blows off Myspace!] Leave a comment or even better, take the quiz "How Well Do You Know Abigail" and see if you do better than I did.
HAPPY BIRTHDAY ABIGAIL!!!!!

In case you were wondering, other daughters of mine have bebo:
Elizabeth is 13 and she has a bebo - littleliz93.bebo.com
Hannah is 7 and she has a bebo - hanbanj.bebo.com
Even tall skinny dad has a bebo, much to the disgust of his children who think he is too old to be beboing. tallskinnykiwi.bebo.com
Oh yeah. And my son Sam is Mr-Spam.bebo.com 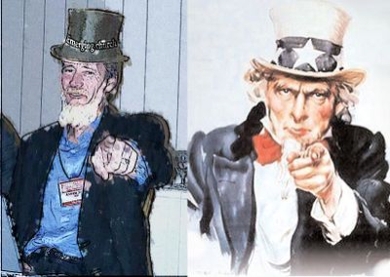 I want you. . . to know that God desires to include you in his Great Plans and His Great Party.

Thanks to designer Paul Dzubinski, Barcelona and Reinhold for the link. 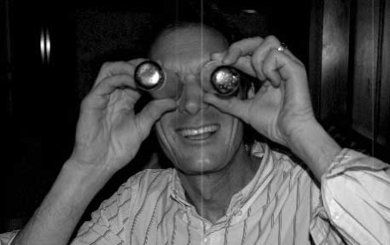 Thanks Leslie for capturing the real me for your slideshow. Must be something weird in that Sweet Carolina BBQ sauce. Looking forward to Nick and Josh's podcast which should be ready by Sep 14. Tune in and hear from me and Olgavaro Bastos Jnr, of Tribal Generation fame. Olgavaro also pastors a church of 2000 people in Uberlandia, Brazil. Its called Sal Da Terra. 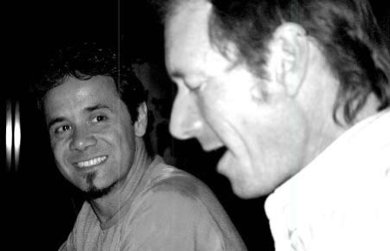 I am being asked for the videos that Olgavaro presented at the Global Briefing last week. You will find much of it here on the TG site including some of our events in Europe, Asia, and the Americas [North and South]

Had a huge slab of Tennessee BBQ ribs last night at Sticky Fingers. Mike Smith rounded up some folk to talk about church in the emerging culture. Mike and I met at Golden Gate Seminary 8 years ago. Thanks for the ribs, Mike. Mystical!!!!

Nick and Josh came down for dinner and interviewed Olgavaro and myself for one of their superb and definitely-NOT-lame podcasts. I was finally able, after months of anticipation, to give the skinny on their "Tall Skinny" recommendations.
My apologies for calling these guys dorky and saying their podcast is lame. If that was true at the time, which it must have been because i said it, they certainly are not dorky or lame now and i am sooooo glad there are podcasts like these - fun and real and educational at the same time. I heard, btw, that after starting their podcasts only a few months ago, they now have almost 12,000 subscribers. Way to go!!!

Pleasantly surprised by the folk-rap-jazzy band Nizlopi. I met them at the pie stall and had a good chat with Luke, who promised to do song for me if I came along. Not that he needed more people - there was a massive swarm of bodies. But my curiosity was aroused, and my ego was wondering if i would get a Tallskinnykiwi song - which i did. And he did. Thanks Luke and John! I will now be your unswerving fan! They have a similar sound to Ben and Robin of 100 Portraits. The best song was their Number One hit "The JCB song" which taps into those deep emotional memories every boy has with their dad. Touching.

I also liked when poet Alastair McIntyre [i mean McIntosh] joined the band and gave some hard hitting poetic words for young men to grow up and look to their Beloved.

- Emerging Church Research has some thoughts on blogging and making it easier for historians to track. [hint - use day and date when possible]
- "Emergent Church is a flock of singularities" just like the youth groups of 1980s, according to a good article on Out Of Ur blog.
- Daryl Dash is becoming a fan of James McDonald.
- Justin Taylor has compiled a Primer on the Emerging Church

To be honest, my interview failed. Randy Stonehill, after a great set that totally rocked, went backstage and wasnt able to talk to me. In fact, he didnt even know I was there. But my interview with him will be blogged anyway, and in the genre of Chris Farley.

Tallskinnykiwi: Randy, you rock! That was excellent. You really WAIL on that guitar. Was that really YOU out there??????

Tallskinnykiwi: Aaah . . shoot. That was a dumb question! Randy, your song "American Fast Food [what a stupid way to die]" was soooooo 20 years before SuperSize Me! I wish you would have sung it today. And "Turning Thirty" was my theme song when I turned 30. And "Shut De Do" is so classic - i used to think it was an old gospel song. But you wrote that in 1983, while driving down a street in Hollywood. Ummm . .. didnt you? Did you REALLY write all those songs?

Randy Stonehill: Yeah it is!

Tallskinnykiwi: Hey - times up and i have to go. Thanks for a GREAT interview!

Tallskinnykiwi: Ok, thats it. PEACE OUT everyone!!!!!!!

[Disclaimer - this interview never happened because Randy walked out the back. But I came closer to Randy Stonehill than ever before. The previous time was 1985 in Sydney when Randy was playing a concert and I was right outside that venue on the same night. Didnt have enough money to go in, of course, but I saw the people who went in. Saw them up close too.
But tonight . . . I got close enough to RANDY STONEHILL to take that photo on my phone.]

I am in Cheltenham right now at Greenbelt Festival. 20,000 people here but it seems like more. Good spirit. Greenbelt photos are being uploaded to Flickr with 'greenbelt2006' tag.

Right now i am blogging at the Contributors Lounge and sitting next to Eliz from folk-hip band Nizlopi - who had a Number One hit "The JCB Song". They perform tonight on main stage.
Ian Mobsey (Moot) was preparing his teaching on emerging church a few minutes ago and is now teaching. I tried to get in but its full and they turned me away. Dang nasty of them! I was even helping Ian with his presentation. He will be focusing on the Trinity as a basis for emerging church theology.

Highlights so far:
- Paul told me that a round of hymn-singing in the Organic Beer Tent last night was one of the greatest worship moments ever for him. LOUD MANLY singing raising the canvas roof, verse after verse, wesley and more wesley, people rushing into the tent, all led by someone on a keyboard who was probably drowned out. Paul will be blogging on the experience soon and i will link to it. Makes me wonder if hymn singing in pubs might be something worth bringing back.

- I helped Fuse Factory set up last night and do an audio-visual worship set at New Forms. They have just left for their home in Lausanne but I hope to connect with them next summer on tour through Europe. Fuse Factory's Bryce and Sam have been friends for years. I slept in their tent last night. Thanks!

- Daniel Bedingfield performed last night to a mass [thousands???] of young fans - it looked like a waving shagpile carpet of young people singing along. Bryce and I tried to say hello afterwards - Bryce knows him from YWAM days and I have had some phone chats with him - but it was a bad time and there were teenyboppers everywhere, showing off their phone photos of Daniel, that we decided to try another time. I didn't realize the guy was so famous. Not bad for a fellow KIWI! 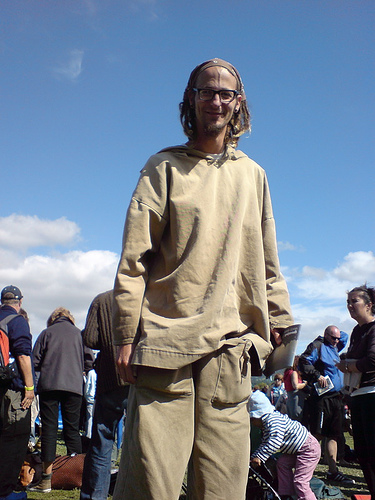 Shane Claiborne is camping next to me. Nice to see him again. And lots of others. Thanks June for image.

Thanks for asking . . . the meetings went really well. Steve Steele pulled it all together with humor, tact and wise counsel. The Maclellan Foundation is a fantastic team of people who are absolutely committed to God and his what He is doing around the world.

Which reminds me of the story of this evangelist who came up to someone and said,
"Have you heard about Jesus?"
And the guy replied
"Oh no . . . what's He done now?"

. . . ahh . . . um hummmmmm . .. [cough] . . .. ahh . . but anyway I was on a spiritual high when i flew out of Chattanooga and i was wondering why. There wasn't a "worship" element to the meetings, neither was there a lot of highly motivational presentations - most of it was informational and functional. Mine was especially boring. But I think what was special about the week was the mixing of different groups who found themselves gathered around the heart of God for the world, and the exchanging of trust and giftings. There was a weird reversal of roles: The Foundations were challenging the missions groups to get serious about completing the Great Commission and the missionaries were sharing crucial information about where the money needs to be spent. It was a turning of the tables, in a way, but the unity and partnership level was so high that I soon forgot, or forgot to ask, which people represented the Donors and who were the missionaries. That divide disappeared. I felt part of a team and valued as a player. That was cool! 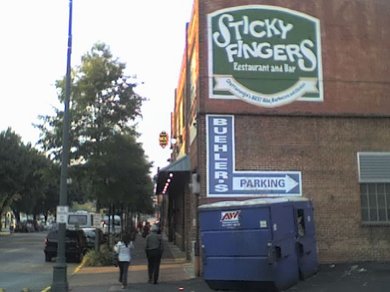 BBQ at Sticky Fingers was a treat. Thanks Mike!

My presentation wasn't as inspiring as it could [should] have been. Powerpoint is a creativity-stifler for me and it makes me a prisoner to linear sequentiality and a business program without a soul. I have used Powerpoint only 3 times in my life and always under compulsion, and have never had a good experience with it. It really is the TOOL OF THE DEVIL and I find it almost impossible even to THINK inside the Powerpoint universe. Next time, if they ask me back, I think i will insist on using my usual software (Arkaos) on my own computer (Mac) to do digital storytelling and video-imaging on the fly. Nothing dizzying, as I have on occasion been guilty of, but smart, compelling, and also responsive to questions and being guided by the session.

As for the Great Commission. It seems like we all need to raise our standards and enlarge our visions. There are some hugely exciting things going on globally - the global emerging culture being one of those opportunities - and an equally exciting movement of Foundations and some wealthy folk getting a tap on the shoulder from a God on mission to reconcile the world to Himself. Time to GET WITH THE PROGRAM!

Highlight: Going off for a drink and roaring LAUGH with David Denmark, Nathan, Elbert, Olgavaro and a few others where we told our most embarrassing moments. Elbert's story is unrepeatable here.
Mine? well . . . thats another blog post.

Hey - thanks for your prayers. I tapped into Gordon Robertson's excellent presentation on the future of media and persuasive impact of the internet, along with Olgavaro Bastos Jnr's whizzingly compelling video of the emerging church scene across South America and beyond, to give an overview of the global emerging culture - impacted by this radical change in communications and culture - as one of the great opportunities for God in our current age. I pray that those Foundations will consider this area a priority in their investments and in their prayers over the next few years. And I hope the global emerging church will play its part in making partnership easier and communication backwards more frequent.
Nuff said . . . L8R