Nose Rings in Heaven [i have video!}

Here is some proof that emerging culture people can go to heaven when they die. I am listening to Gordon Robertson tell us about the CBN media center and the future of new media. He just showed us a really cool movie from the Media Center. Here it is on Google Video. Its called "Are You Going? Its one minute and 3.5 Megs. Theres a guy with lots of piercings who gets into heaven. Apparently, Gordon's dad who started the station, is not too impressed with it. But i sure like it and i think Gordon does also.

What does the Bible say about nose rings. Check out Ezekiel 16 and Genesis 24 and see for yourself.

At the Global Briefing.

The Global Briefing is going really well here at in Chattanooga, thanks to the good people at the Maclellan Foundation. A good number of other Foundations are here at their request, all of whom are interested in God's work overseas. I speak tomorrow at 3:40.

Lots of my friends and comrades are here to speak and listen so i am in good company. Channel 3 and 6 just got some footage and left togethger so I guess something might happen on the news tonight.

Yes - sometimes I dress up. Reinhold took this picture of me today. 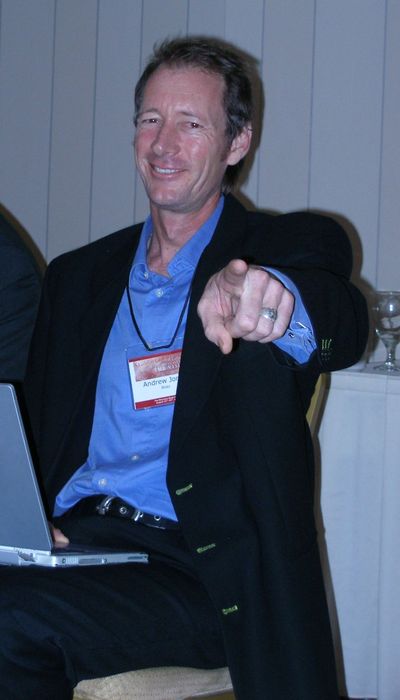 Check out Debbie's work on my suit coat. Having been inspired last month at the Dries Van Noten HQ in Antwerp, I asked Debbie [my wife] to sew a funky kiwi color onto my suit, turning it from a Thrift Store Marks and Spencer into something unique and mine. Thanks Deb!

My NWA Plane from Amsterdam

I took the Northwest flight from Amsterdam to Memphis yesterday - which was not by choice - the food is poor (dinner presented by HEINZ and a snack from COLEMANS) and I much prefer ANY OTHER AIRLINE. But at least I took it yesterday and not today. A NWA plane left Amsterdam and was returned with 2 fighter planes as escort. Police have detained 12 people. Details here.

Some nice people in Chattanooga want to take me out for BBQ dinner and discuss the emerging church. There may be room for one or two more. Wednesday at 7pm. If you are interested in coming along, send me an email and tell me why you would like to be there and i will forward it on to Mike.

Out and About - USA and UK

Traveling this week. Peace on all. Here is my schedule:

The Truth Isnt Sexy and other Freedom Projects

Quite a number of projects heating up as March 2007 gets nearer. March, as you know, is the 200th anniversary of the abolition of slavery.

1. The Truth Isnt Sexy
Check out these flyers and banners. Its almost enough to get my blogged banned from censoring software programs . . . . AGAIN!
My friend Si Johnston of Protest 4 says The Truth Isnt Sexy Campaign is kicking off. It needs your prayer and support if we are to make a dent in the human trafficking situation by MARCH next year. The beer mats are not available online yet but i have seen the e-versions - really powerful and sad. The front side contains the images like you see above, and the back has the story of abuse and slavery that is connected.

2. Setting Captives Free
If you make it to Greenbelt Festival this weekend, check out the CMS area and all the resources they have related to the "Setting the Captives Free" theme this year

3. Amazing Grace
This month I saw a short preview of "Amazing Grace", Walden Media's movie based on the life of William Wilberforce. Really excellent film!  The venerable Bob Beltz from Walden Media graced our presence at the Die Gefaehrten Roundtable at Freakstock Festival and showed the preview to about 800 young people who gave enthusiastic approval. Bob's photo was taken by LovingBoy [real name: Emmanuel, and he took lots of great pictures] 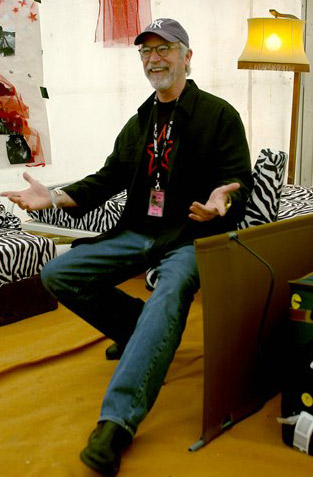 There is a lot of possibilities with this movie and the various discussion groups and action groups that could arise from it. Love to hear your thoughts on that. 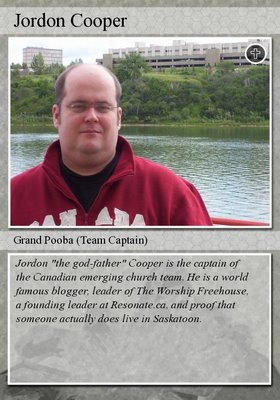 I was just Wifing at Aberdeen airport and found this Trading Card of Jordon Cooper at PernellGoodyear. Couldn't resist posting it here. Coop is a legend and has been stirring up the internet since last century. Coop has been making up his own EC trading card set here.

A much older Emerging Church Card series, btw, appeared on Liquid Thinking in 2003. They were kind enough to make a card for me and give me a generous MacLaren rating. And no . . I didn't pay them!

- Mark Glasser (MediaShift) finds examples of Church 2.0 for PBS, although they appear to be more traditional-structured churches using media. Would have expected to see some cyberchurch or e-church varities there but . . worth a read.
- Cory Miller of Church Communications Pro has 6 PR resources for your church

More coming . . . but my Aunty Olwen has arrived from DownUnder and I am showing her the sights of Orkney. L8R

Hey. That photo of the bomb hole on the Red Cross truck is real. I know. I was walking past it the other day while enjoying a leisurely stroll down the streets of Beirut, licking an icecream, as this unedited absolutely genuine untouched photo will prove beyond a doubt. 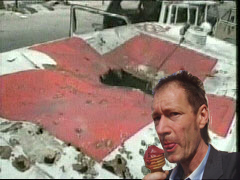 Sounds like RatherGate all over again. Heres the skinny: Bloggers figured out that some Lebanon war images had been edited on photoshop and blew the whistle.
Newsbusters has the image in question.
World Net Daily says: "In the aftermath of Reuters' admission that one of its photographers, Adnan Hajj, had manipulated two war images from Lebanon after bloggers smoked out his crude Photoshop alterations, and all 920 of his Reuters photos were pulled, evidence of far more troubling photo staging and media deception in the Middle East continues to pour in."
Charles Johnson called it Fauxtography
HT: Moriel Ministries email which gives a little twist from the Scriptures: Mark 4:22 "For nothing is hidden, except to be revealed; nor has anything been secret, but that it would come to light.

Want to hear the skinny on Lebanon from a blogger who lives there? Take a look at In The Mind of a Sam

Is the Emerging Church Movement "Orthodox" and Should We Charge Money?

2 Blog Series started this week that are worth following:

2. Steve Camp: We're Still Paying John Tetzel: . . . should we be charging for ministry?
For the record, I side with Steve on this one. The gospel is freely given and i have a problem with charging. In fact, I have been preaching and speaking in hundreds of churches and conferences for over 2 decades and have NEVER charged a fee. I still don't. Some conferences think i am weird. They often give me honorariums but i never give a figure to them. I am supported as a missionary to preach God's message and that support should cover me. I see it as MY responsibility to get the resources to help me minister.

(Image by Tallskinnykiwi. Those using it without permission will be prosecuted to the full extent of the law. Details here)

I do, however, ask the conference organizer to give me a place to lay my head and help as much as possible with travel costs. But if i get stickly on that issue, I end up only speaking at wealthier, more established institutional events and dont make it out to the emerging fringe of ministry where no one has money and everyone pays for themselves to get to the meeting - including the speakers.

(Animated GIF by Tallskinnykiwi available at the new LOW cost of $39.99 right here!)

I am not condemning those who charge for speaking - because many of my best friends and colleagues do this - but I was greatly impressed as a young Christian with Hudson Taylor and Keith Green and others who felt that charging money was unethical for something freely given.
Thats one reason why i like blogging over publishing (see my post: I am a Creative Commonist) and why I have had many discussions with book publishers over allowing my future work to be given freely to those who want it.
But its more complex than i have just stated and Steve Camp has been a prophetic voice in the CCM in this area. Lets see what he comes up with.