The Trees of the Field Shall Clasp Their Hands

We are meeting in a Danish Pentecostal building today for our ecumenical church planting conference. About 60 of us, all enjoying each others company and making fun of ourselves. There are Baptists here, and Lutherans, Penties, Charasmatics, house church, emerging church, Reformed . .. which reminds of me of a verse (based on Isaiah 55:12) I have been composing in my mind for the Reformation songbook:

You shall go out with austerity
and be led forth with sobriety
The mountains and the hills shall break out their notebooks
There'll be sermons of Paul
And all the trees of the field
shall clasp, shall clasp their hands.

ok - I am still working on the last word. Let me know if you think of something. And if anyone ever gets around to writing a Reformation Bible, then order me a Red Letter Edition - there's nothing like having the words of the Apostle Paul highlighted in red for easy viewing and memorization.

I've gone to Copenhagen, land of the Danes who are famous for their humor. Wonderful, wonderful, Copenhagen, friendly old girl of a town, as Danny Kaye once put it so . . . HANS-somely . .. thank you very much. I''ll be here 'til Friday . . try the veal! And why not let good ol' Danny lay down some audio carpet to help you enter into the spirit of this blog post? Here we go . .

Young people need a happy hour at the dinner table with their family. Let me explain what i am thinking.

I saw some stuff on TV a few weeks ago that got me thinking. UK has a serious problem with badly behaved, foul-mouthed, binge-drinking youth. [Sounds like they interviewed that church youth group I visited in London]. According to a recent study by the Institute for Public Policy Research called Freedom's Orphans, British youth are worse in most areas of behaviour compared to their counterparts on the continent.
"Measured against German, French and Italian youngsters, British 15-year-olds are drunk more often and involved in more fights, and a higher proportion have had sex". Link

The only countries with worse binge-drinking youth are Ireland [who woudda thunk??] and Denmark. As fate would have it, I will be in Denmark in a few days and will probably rub this statistic in their Danish faces to make me feel a little better about the country I live in.

One of the solutions, according to researchers, is the family meal. 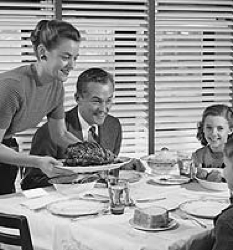 "Some 93% of Italian teenagers eat regularly with their families; in the UK just 64% of 15-year-olds do the same. . . Nick Pearce, director of the IPPR, told the BBC last night the figures pointed to an "increasing disconnect" between children and adults, with young people learning how to behave from each other. He said: "Because they don't have that structured interaction with adults, it damages their life chances. They are not learning how to behave - how to get on in life - as they need to." link

The answer for our family?
Well, we live in the UK and our oldest kid is now 15 [what a co-incidence!!!!] and he runs off from meal times as fast as he can. I think an extended dinner table experience might be a good start. What I am working on right now is a one hour interactive meal hosted each week at our dinner table. I was thinking of calling it "Happy Hour" [although the origin of the term 'happy hour' might call for a different name ] and it should include
- A well thought out menu
- A spectacular and ostentatious dessert.
- Some table games or quizzes that lead to "structured interaction".
- A prayer before the meal (grace) and maybe extended grace to cover the events of the moment.
- A higher level of table manners
- Conversation about issues and relevant stuff.
- No running off until the ENTIRE HOUR has passed.

We are thinking about Tuesday night at 6pm. Any ideas out there? Any veterans? Any other families that want to hook up with us and swap war stories? 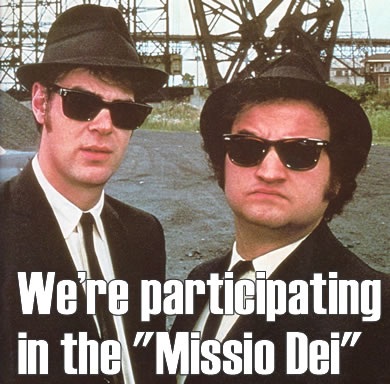 Following on from their great series on the emerging church some months ago, Dallas Theological Seminary tackled the idea of "Turning Theology Inside Out: Missio Dei". [HT: Matt Glock] Dr Mark Young has some blog-worthy thoughts [Podcast 1, 2, 3] that will have Reformation fans tip-toeing through the Tulips.

Tell you what's cool. I hear American church leaders and professors going on and on about being missional - missional this and missional that - but they very rarely invite seasoned missionaries to come and offer their advice on what it actually means to bring insights from the mission field into the local scene and so they end up rehashing their old ideas with new vocab. Not so this time with Dr Young who has been overseas for two decades. I have never met Mark but a few years ago I gave a lecture on emerging church at the Evangelical School of Theology he founded in Wroclaw, Poland.

I am just listening to the series right now and might have some thoughts later. This Saturday I am teaching something similar called "The Skinny on Being Missional" at Fusion National Conference in Oxford.

And no, that Blues Brothers image is from me, not the Seminary. Although once i walked into my old pastor Charles Swindoll's office at DTS and saw a very cool Terminator-type poster with Swindoll in his leather jacket. It was called "The Serminator". Oh yeah - another coincidence. Charles Swindoll is now Mark Young's pastor at Stonebriar Community Church.

Related on TallSkinnyKiwi:
WHATEVER and the Missio Dei
What I mean when i say "Emerging-Missional" church
Thoughts on Missio Dei
The Missional Church: Reformed Heritage?

As you know, Debbie (my wife) spent last week in Houston discussing the potential for pilgrimage and a quasi-monastic-global-learning-trail-pilgrimage-type-thing for the missional/emerging church. She is not much of a blogger and has not written down her experiences but you can check out Mark Berry's post and photos.

Other participants dont seem to have got around to blogging it yet. Shannon might soon. Probably not Brad Sargent. Maybe the Germans will come through on the blogging side.
[update] Bjoern has some thoughts here

Major Ian Thomas and his Sermons

Staying in this Sunday morning? Iggy suggests downloading or reading a few sermons from Major Ian Thomas. I actually met the Major at Keswick in Australia back in 1983. And he was old back then! The Maj has logged in a good 6 decades of ministry and is working on his next one. Thanks Iggy! And keep on soldiering on, Maj . .. ah . . I mean . . Sir!

Is George Barna the most quoted person in the church today?

I said he was a while ago but actually, he isnt, if you include new media and the blogosphere. In my post George Barna's Revolution: A Review, I passed on a quote about George Barna as "the most quoted person in the church today" and I now believe that information is incorrect if we include new media (blogs, webzines, online periodicals, etc) in the equations. I have been tracking single occurrences of "George Barna" on the web for about 6 months, along with other high profile leaders connected to the emerging church. George is quoted less than certain other spokespersons in the church today on the blogosphere, even during high profile events like the Revolution Conference.

Did you know that John Piper gets about mentioned about 4 times more often than George Barna. How often those mentions are actual "quotes" is something I dont have the time to research.

btw - I still really like George Barna and i highly recommend his book.

I got an email invitation to be in phone chat with Sylvester Stallone last week regarding his new movie, Rocky Balboa. Which I accepted. But I didnt hear from them again. I am guessing they saw that i am now living in UK and decided to GIVE ME THE SHAFT which is fine. . . no hard feelings . .. just means Sly didn't get to say "Yo! . . Tall Skinny Kiwi!" and I didn't get any specific info on his movie that I can share with you.

But let me throw out a Sly quote:
"If you don't have a great relationship with God, you can go off the deep end. The Christian foundation of life is really the perfect ideal which one should base every decision they make on, because it comes from a sense of kindness, a sense of giving, a sense of fairness, and it avoids everything which I'm exposed to every day in my particular industry which is greed, and avarice and jealousy and bitterness . . ."
Interview with Catholic Digest

Also in Edinburgh last week, I met with some ministry leaders. Paul and Fiona Thompson (Dreamday, Tartan Theology) and Peter Nielsen (Church Without Walls). I was talking to Paul about the Scottish and he said the three curses that need to be overcome in this country are:
Masochism, sectarianism and addiction. Next Dreamday is Dec 2 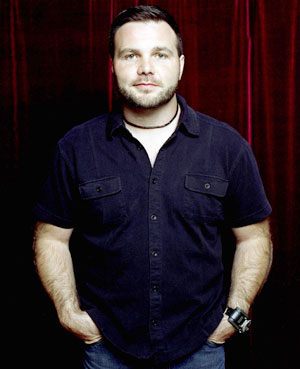 I have had a little email correspondence with Mark Driscoll of Mars Hill Church and have encouraged him to put forward an apology. I don't think he realizes the gravity of this situation but am hoping a few others [where are the Reformed folk???] might also share their thoughts with him. I am a little cautious of bringing too much attention to it with this post but I know a lot of you are talking about it and blogging about it . .. . so . .. . here's the skinny on the Mark Driscoll episode which has become more complex since my post entitled "The fat lazy blog-post that has let itself go".

The Skinny:
- Mark's original post which got things started.
- Christian blogs are tame compared to Dan Savage and others in the secular press. Mind your step . . .
- Protest by EndFundamentialism rescheduled for Dec 3. Protesters are using the Misogynist label. Mark already registers in a Google search for misogyonist, but Bob Hyatt argues that Mark is NOT a misogynist nor a sexist but he is a chauvinist.
- Rose Madrid-Swetman has posted an Open Letter To Mark Driscoll. She sent it to me yesterday in an email. Pretty fair and well written. Those quotes in the open letter from Scot McKnight on my blog comments can be found here.
- I think Bob Hyatt is the most balanced voice in this whole episode. Bob is not a Driscoll fan and yet he is representing both sides in a fair manner. And most importantly, he agrees with me about the protest being a bad idea, so he must be right. Read Bob's Latest on the Driscoll and Latest Part II. [update] His latest is "why cant we all just get along" and he publishes the open letter.
- The Salon article was exaggerated - according to a comment by Judy who also features in the article.
- Iggy asks whether Calvinism is sexist. Interesting question. Where is John Piper when you need him?
- If you want to give Bob a break, Scot McKnight is fielding questions and comments and, of course, so is Rose.

What do I think?
I like Mark and he has been a good friend but I think he has watched Fight Club once too often.

Related:
Mark Driscoll Responds
The fat lazy blog-post that has let itself go.
Is the Blogosphere Ready for Mark Driscoll?