I am at Aberdeen airport - the second of my airport pilgrimage to show off my "Cross About The Strike" tie. My doctor was on the last flight and was asking me about the emerging church and what i knew about it. He had read an article in Christianity Today recently and was surprised to see a resident of Orkney Island in the article.
The flights on British Airways are not as empty as predicted and there are refreshments, at least there was on the last flight.

Today I am putting the words of Jesus to be read against a Sigor Ros video and I am using the Word version (free download) of the Most Trustworthy Net Bible. I use the big black Net Bible at home for study (only $20 this month for non-leather) and I prefer to use the online version at Bible.org because I can quote it, print it, give it away without worry about copyright. As long as i don't sell it. You could say its about as copyleft as the Bible can get. 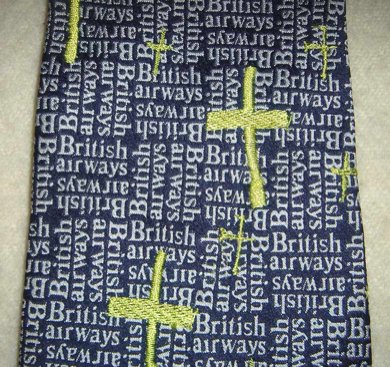 "Cross About The Strike" Original Tie, £40 [+ postage] is being auctioned on eBay.co.uk. Custom designed for TallSkinnyKiwi by Debbie Jones on an authentic, vintage BA tie. Only one available. Viewing available at these airports on Wednesday 31st January: Kirkwall, Aberdeen, Belfast and London Heathrow. Look for this sharp looking man . ..

Schedule: Belfast and London this week

Tue Jan 30- I will be in Inverness and Luton - catching flights - but I could meet at the airport if you want to buy me a coffee. I might stay in Camden Town, London that evening.
Wed to Sunday. Belfast and the coast of Northern Ireland with Soliton Network's Celtic Sessions.
Mon - Tue (Feb 5-6). London with CMS's Mission Movement Team.

Schedule Gap on April - 24th and 25th. I am in Montreal with David Brazzeal and the Resonate Network until April 23rd and then in Denver for some meetings that start on the 26th. That means I am free for two days. Can anyone tell me if there is something in USA worth attending?

- Jamie at Emergent Voyageurs weighs in on the homosexuality issue from a personal perspective.
- Beer and the Bible is the title of an article on an emerging Baptist community in St Louis that hosts "Theology at the Bottleworks" in a local pub. Interestingly, "Beer and Bible" was the nickname of the Bible study i set up for electricians in Southern California in 1987. I didn't like the name very much because having a drink was not the focus.
- Neil Cole of CMA just had his First Annual Organic Movements Conference in Long Beach. i really wanted to attend but couldn't. Maybe next year. Looking forward to hearing some reflections.
- Celtic Sessions happens in Northern Ireland, Feb1-4. I will be there. The theme is "Dangerous Living"

Towards a Mixed Economy of Old and New Media

Interesting discussion at DAVOS 2007 regarding how MSN and new media [bloggers, etc] can get along or if it is possible to do so. Classic quote:

"A blogging entrepreneur drew a useful distinction between old mainstream media (MSM) which had attention deficit disorder and the best bloggers, who were obsessive compulsive. Newspapers started out on stories or campaigns and then got bored. Bloggers never got bored of their own subjects." Guardian

The discussion reminds me of the old vs. new media conversations at London's WeMedia Fringe that i participated in last year. It also reminds me of the tension between institutional church and emerging church - and the desire to work together to be a 'mixed economy'.

The last of the January birthdays. That makes 3. Samuel is our eldest and he turned 16 today. Cleave has just put up a new website called Presbymergent.org - "the online community for those who live in both the Presbyterian and Emergent/emerging church worlds". It's a good site but Cleave says it needs some graphic-lovin' and its waiting for a PresbyGeek out there who wants to design a custom WordPressbytemplate. 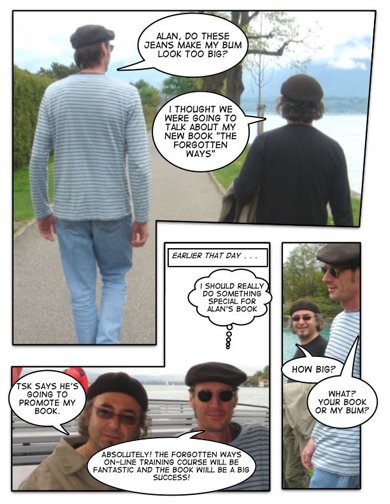 My good friend Alan Hirsch of FORGE has a new book "The Forgotten Ways: Reactivating the Missional Church" and it has just been released. But you knew that already. I am running a little late on this blog post but at the same time, Alan and our DAWN team have a special offer for you if you want to do a custom online course beginning next month - with us and our team. You will be part of a three month European "cohort" and you will get a discount on the cost. Apparently they worked this out earlier this month in Copenhagen - I was supposed to be there but got stuck in Scotland.

But anyway . . . the book. An excellent book and most worthy of your attention. You open it up and the first words you read are these . . .
"The Forgotten Ways is a compelling challenge to awaken the church's innate entrepreneurial instinct and propel it into the fringes of our emerging culture. I recommend it highly, especially to those endowed with the boldness to align the church's operating system with the missional heart of God"
Andrew Jones, www.tallskinnykiwi.com

Well said! I couldn't have put it any more eloquently myself!

Alan's book is a full package training course packed into a book. I was with Alan last year in Switzerland as he taught through this material - much to the delight of German speaking ministry leaders - and I can tell you that this will be a big seller among denominational and mission executives, strategists and those gifted with apostolic potential but don't know what to do with it. And honestly, not much has been written for apostles in recent years. And Alan's teaching on communitas vs. community is really worth thinking through.

In their previous book The Shaping of Things to Come, Alan and Michael Frost laid down some missiological and theological background for emerging missional church movements. Alan picks up on this and gets more practical and strategic in this new book The Forgotten Ways. Michael's new book "Exiles" is also worth buying, and it takes a more personal, lifestyle approach to missional living and community. Both books rock and it would be fair to say that both Alan and Frosty should be on everyone's Top Ten reading list for emerging-missional books.

But if you haven't got Shaping of Things to Come, I suggest buying it first. Its a good primer on missiological issues that back up emerging church thinking. 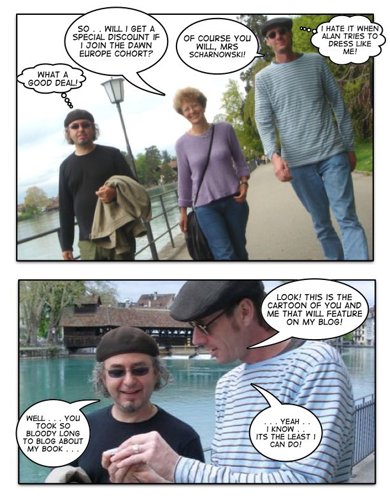 MORE:
Read a sample [PDF]
Read some reviews on Subversive Influence, Reformissionary, Next Reformation, PoopEmerges, JesusCreed, and Easum/Bandy who give it book of the month and call it a "must read"
And if you want to get in on our Euro-team cohort with DAWN Europe and Alan, then send me an email and i can get you sorted.

ORIGINAL POST 26.1.07: Persian bloggers. They are our new neighbors. Maybe its time to meet them. PersianBlog.com is a large portal and a good place to start . . . if you speak Persian and Blogs by Iranians if you dont.

I dont speak it, but I have a personal connection to the Persian language. A distant relative of mine, W.A. Clouston, was a well-known translator of Persian fables and the perhaps the guy who introduced much of the poetry of Saadi to the English speaking world back in the 1800's . One of his books is called "Flowers from a Persian Garden". I cant afford a copy of the actual book, but an online version at Gutenburg.org lets me see some of what he wrote and why he loved the Persian language. Its a language I would consider learning if I had the time. And if i was a bit younger and had more time. But in the meantime, I give out a big HELLO to the Persian bloggers.

The country of Iran and the scattered Persian speakers around the globe are on the map at the moment. In the political world, there are threats and potential conflicts. An email this morning seemed to raise the paranoia level to a new height. I think America craves a daily dose of terror just like I need my tea in the morning.

On the radar of Christian missions, there is much interest in the huge number of Persian speakers globally who are returning to their roots as either Zoroastrian or Christian. In fact, the amount of Iranians, in Iran and in the global diaspora, who are turning to Jesus as a result of dreams and miraculous intervention is quite staggering, but not something the MSN want to talk about. There was a meeting in London yesterday for Persian Christian leaders to discuss what to do with all the very recent church growth among them. Apparently, about half of the new Persian Christians are opting for house churches and the other half are plugging into existing church models. I have heard that this kind of distribution is also happening globally. In Iran, believers in Jesus are still persecuted and threatened with the death sentence, as reported last month on WorldNetDaily, but the movement seems to be unstoppable.

The first Persian blog was born on my birthday - Sep 7, 2001. By 2004, The Times said that Persian was the fourth most widely used language on web logs. Iran now has the 9th rank in the world for the number of blogs. [Source: Persian Weblog, quoted in "Experiments on Persian Weblogs" [PDF]. Add to that the number of English language blogs written by Iranians living abroad and its a LOT of blogs. At least 700,000 although the number of active blogs is much lower - perhaps 40,000 to 110,000 according to Wikipedia 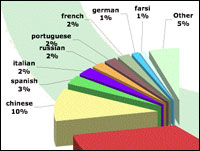 Technorati claims Persian (Farsi) is among the top 10 languages of the blogosphere, as illustrated by this graph. It doesnt show the non-blogging internet, where Persian is a larger contributor than people realize. Iranians are very much at home on the internet and even studying religion involves uploading large quantities of writing online.