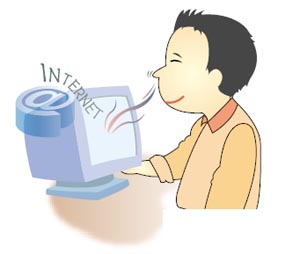 News story says Korean tech experts predict computers will transmit scent through the internet by 2015. This will be very good news for the alt. worship communities and cyberchurches. Maybe even bloggers. Expect my recipes to have accompanying smells. I wonder how others will use it?

Last night, during my daughters music lessons, I had chance to read most of A.T. Pierson's 1899 biography called "George Müller of Bristol". [I have a 60 year old copy in good condition but I just found an online version at BibleBelievers for you poor sods who dont have a copy] I read a similar biography called "Delighted in God" many years ago and was hugely inspired by this German who, like August Franke who was also from Halle a hundred years earlier, started orphanages for children based on spiritual principles and faith in God. Incredible stories of faith and perseverance. Also, I didnt know that Rev. Charles Hodge (Princeton) was tutored in German at Uni. of Halle by a very young George Müller.
And what really impressed me, apart from reading the Bible through about 4-5 times yearly [dang!] was his strong accountability on financial gifts - his insistence that gifts go to exactly what they were given for, his refusal of gifts if the conditions were not right, and his almost anal accounting procedures that were kept up year after year.

So, in following the example of George, we should be faithful in small things and pay attention to our consciences. 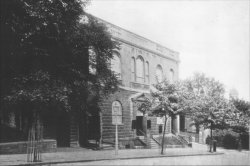 Another project i am thinking through is a global mapping system for pilgrimage and historical sites for Christians. You could probably find George's orphanage in Bristol or his first church (pictured) but what about his home in Germany, or the prison in Magdeburg that caused George to reconsider his life without God? If everyone could map and tag the sites of interest in their own towns and cities, that would be a fantastic resource. Don't you think? I bet there are houses and churches just round the corner from you that have great historical value in their stories of saints and the movements of God.

Are you geeky enough to want to help me with that project? Let me know. No money involved but it would be a fun project.

Dont Drink. Dont Smoke. What do you do?

I was thinking of these words this morning - from Adam Ant's Goody Two Shoes song. I was thinking of the need to be recognized for what we DO, what we practice, rather than what we do not do. And then i notice someone blogged the same thing today. His name is Lloyd and i will let him speak. HI FIVE LLOYD!!

Cory Miller at Church Communications Pro has released the findings of the 2007 Christian Blogger Survey. Full report here. I am re-posting this with the list of participants and some of Cory's findings:

"Here are some snapshots of the survey:
* Total Number of Blogs In Survey: 367 blogs
* Most Popular Blogging Platform: Blogger with 184; WordPress was next with 77
* Length of Blogging Tenure: 122 blogging for one to six months; followed close by 121 who have been blogging one to two years
* Frequency of Posting: 175 indicated “one to 10 times a month”
* Gender: 309 were males
* Age: 136 are between 31 to 40 years old
* Ministry role: 128 respondents were “senior pastors”"

[Original Post] Cory Miller has released the results from a survey of over 360 Christian bloggers, including me. Its called “Blogging Believers: Who's Out There in the Blogosphere?” Interesting to see the largest group was “Senior Pastors”. Cory recommends this list of bloggers.

I remember a time (2001) when I was excited that I had 12 Christian bloggers on my blog roll. By 2002, that number was raging out of control and I realized it wasn't possible to link to all of them. Ahhhh . . . the old days!

Youth For Christ Highlands and Islands (Scotland) have a full time position for a Missional Development Worker. The fortunate person will have to deal with me whenever they get to Orkney. Details follow.

Simonas in Lithuania, regular reader and contributor to this blog for many years, lost his dad last week. He blogged his dad's picture here if you want to go over and pay your blog respects. Thinking of you dude!!! Quite a few of us have lost our dads recently. Mine passed on two years ago.

15 people in our home last night at our apartment above the post office - quite a feat with only one bathroom and one toilet (same room)- mostly young people and one family - Bea and Andy Marshall [who blog at Moogaloo] and their two kids from Sheffield. They will be here for a week, mainly to spend time with Debbie and get some mummy-wisdom. They used to visit us when we had the Giant Peach in Prague. They are part of a house church start-up today in Sheffield that happens today in their absence.

We are all well. Abi's netball team made the semi finals yesterday. Sam had two bands play in our underground club last week. His hair is still red, but has been green also recently. Elizabeth is drawing. Tamara is beating her sisters with the eyetoy on the playstation 2. Debbie is about to take up pottery. Hannah is still bubbly and loves going to church. I am enjoying the last part of a stay home spell before heading off on my next travels.

Over the next few months i will be in London, Switzerland, Canada, Denver, Minneapolis. I am thinking of cutting my hair short and would like to lift some weights again to try and gain some weight and strength.

Dr Ken Meeks has been examining the Emergent church movement in light of the accusations from Calvary Chapel. He is not speaking from an emerging church standpoint but from a Bible College teacher. He explores these issues: Is Emergent Heretical?, what is heresy according to Calvary Chapel, and does Emergent promote pluralism, Part 1, 2, 3, 4, 5 and 6.
His conclusion? According to Kenneth, “What Dr. Deeks is doing is basically evaluating the statements that Chuck Smith (Sr) and co. have made condemning the Emerging position, and he's coming to the conclusion that not only are the claims unfair, but that he is agreeing with the traditional (albeit hard to pin down) Emerging position on the issue.” Ubuntu

Related: The Chuck Smiths on Emergent Church and How your Emerging Church can stay in the Calvary Chapel

I have never heard of Roger Moran (of MBLA) but he is sure blowing up a tornado in the Southern Baptist Church. His statement concerned with the emerging church, [not Resolution 5- thanks Marty for correction], is being discussed at SBC Outpost (lotsa comments) where there is a re-write of his resolution. I would be happy to give a defense for the emerging church inside the SBC, for which i have just given the last ten years of my life (California and Texas, and visits to every state except North and South Dakota), but i don't want to waste my time if no one takes him seriously. Anyone know about Roger Moran?

Related: We Baptists do not drink . . (in front of each other)