It went really well. Some great people doing great things for God in Germany. A bunch of us met at a Thai restaurant. I started by sharing some thoughts from a German book called "The Emergent Church: The Future of Christianity in a Postbourgeois World" (1981, English version). In his book, German Catholic Johann Baptist Metz predicts a new kind of church arising from the margins of society and a new reformation of the SENSES for Protestants and of GRACE for Roman Catholics. How prophetic.

Heres a few photos and thoughts from the event. 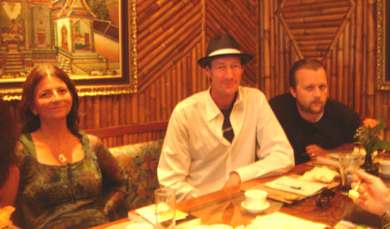 Kerstin Hack (left) showed us some excellent publications and her new book on Anabaptists by Peter Hoover. Only available in German language but if you looked around on Kerstin's site, you might find a English version PDF that you can download for free. And since we were just talking about Anabaptists and the emerging church . . .Ahhhh . .. its all in German . . .let me do it . . .. here you go "The Secret of the Strength [PDF]" The German version is probably better and Kerstin and her team spent 400 hours in libraries checking on the original German sources for this book. Labour of Love!!

Those cards on the Proverbs are for distributing in coffee shops and some are free. As well as running Down To Earth Publishing, Kerstin is involved in the Berlin emerging church scene and Together for Berlin. She doesnt look anything at all like Pee-Wee Herman. Just need to clarify that from the beginning. Hi Kerstin!!!! 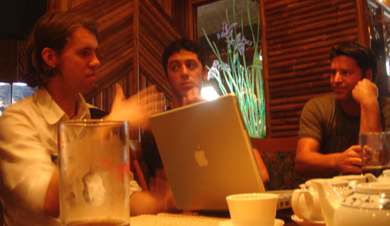 Some guys from California came over to see what God was doing in Germany among the emerging culture - which was a good excuse to meet and swap stories. This is Marcus Laegel (left), who is also part of 24-7 Prayer, explaining how God called them out of the "cool" club scene in Dresden to start a monastic style church base in a small town. They approached all the pastors and Christian leaders with their intentions, as well as the Mayor. They said they had no money but wanted to impact the town for God. The Mayor gave them an old schoolhouse for 50 Euros a month and now about 20 of them live there and use the schoolhouse as a base for ministry. One bathroom and no ovens until recently but they are loving it. Marcus made it clear that coolness was never the goal and there was nothing rebellious at all about their ministry. I think he felt it necessary to explain that to the Americans because the emerging church criticism from USA seems to poison the rest of the world and makes it hard for them. Florian (left) shared about his ministry called Dream House and Mirko (right) talked about Jesus Freaks and how they started out as punk rock teenagers who had started a hundred communities in a very short period of time and with no resources. I think all of the Germans in the room have been impacted by the ministry of Jesus Freaks and Freakstock Festival.

Blog Comments and Graffiti from a German toilet

I was reading the graffiti on the toilet wall at Frankfurt Hahn airport, where we spent last night on the hard floor, being interrogated all night by bright lights. And as i was reading the graffiti i was thinking how similar to the blogosphere. Someone writes a thought and then people respond underneath with their comments and reactions. And everyone who pays a visit gets to read it. People hang out longer to read good comments. Nothing new under the sun.

Just saw the final episode of Heroes. What a ride! Wont say what happened for those have haven't seen the final or for those outside USA without broadband but hey . . . it finishes well and i cant wait for the next Volume.

Its been a great show. Tight story and script. I LOVED the Japanese guys. Masi Oka was hilarious and his friend was great also. I wish the evil Pettrelli mother didnt say that she would "say a prayer" for the dying man. With so much supernatural stuff happening, both good and bad, its a shame that Christianity peeks its head through this horrible lady. Anyone have some thoughts on the religious themes in Heroes??????

I really don't watch TV episodes and I hate sitcoms. I like LOST and our family is committed to an hour a week. I didnt have time for 24 but may consider it in the future.
We did watch Alias - buying the DVDs on ebay and selling them again made it cheap and convenient.

Here is Samuel, my son in whom i am well pleased. He was foolish enough to come along with me on this trip. 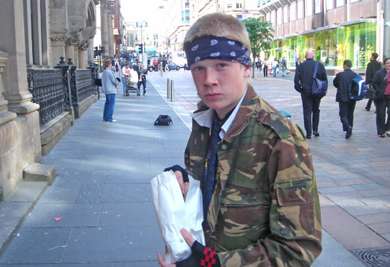 We were in Glasgow yesterday and the highlight was connecting with Brodie McGregor who seems to know a whole lot about what is going on around Glasgow and beyond. We also saw Spiderman 3 - which btw is an excellent movie with strong themes of reconciliation, forgiveness as well as cool graphics on the intro.

Travel on the cheap.

Samuel and I leave tonight on the big overnight ferry that takes us down to Aberdeen. We will be in Glasgow tomorrow and then Frankfurt on Wednesday. We are doing this trip really cheap - using buses and cheap flights and sleeping on the floor of the ferry (tonight) and Frankfurt Hahn airport (tomorrow). Our bus ticket from Aberdeen to Glasgow was £6 each and our Ryan air flight to Germany was about £12 plus taxes and other charges [more like £45 each). Once in Frankfurt, we are staying at the Stay and Learn Youth Hostel in a dorm room.

So, travel doesn't have to be expensive. Packing a sleeping bag and air mattress (for airport floors) is a big help.

On Saturday we went over to Fursbeck Pottery where Debbie is learning to throw clay around the place. We helped host a learning party for 30 archeologist geeks from around UK who are interested in neolithic pottery. 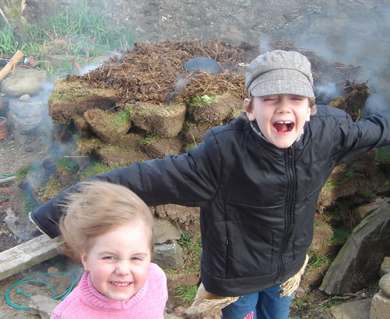 The kiln is loaded up with grooved ware pottery and the peat is lit. Thats cow dung on the top but 4000 years ago, the residents here would have probably used seaweed. The kiln is made of sod and if this is how there were made back in the neolithic age, then that would explain their absence or invisibility on current archeological sites. This might be the first time a kiln of this sort has been recreated in the UK.

Andrew Appleby explains his theories on why pottery was made the way it was in Orkney.

Last Sunday I preached at Stromness Baptist Church and used the 4 stained glass windows at the front of the church and their corresponding Bible verses as a guide to the message. In fact, it was the message and it was the dedication service of baby Stella Shiner.

The colours of the stained glass were selected a century ago by Stromness artist Stanley Cursiter who would later direct the National Galleries for Scotland. The colours represented the water (blue) heather (purple/red) grass (green) of the Orkney Islands. The verses speak of the cycle of life and death (Job 7:10, Ecclesiastes 12:7) and the challenge to be people of mercy (Mat 5:7) and purity (Mat 5:8)in the light of the shortness of life and the judgement to come. I felt Psalm 103 allowed all four windows to find convergence and a united message. 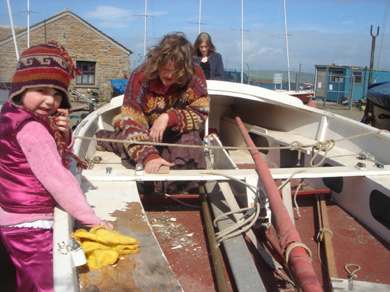 Our first boat. My father always said "Dont buy a boat. Just have a friend that owns a boat" which was good advice at the time. But this one came up and we couldnt resist. We live a stones throw from the ocean. All our friends sail. The family have sailed a little but always in borrowed boats. So . . we picked it up yesterday from George who gave us the boat for a £50 donation to Cancer Research.

The boat is a Mirror 16 Dinghy. Mirrors were the small sailing boats that kicked off the DIY boating movement in the 60's. This one is a little bigger and was probably built in the early 70's. James B. came with us to pick it up. As it turned out, George helped rescue James from getting swept out to sea eleven years ago. Co-incidence?

Another mega-blog has gone over to the dark side of Web 2.0. Its a complete redesign and restructure of the ever present Blogs4God. Dean has been running this forever. It must be one of the first Christian blog aggregators. Yes? Dean?

Dang, my blog is soooooo outdated and shabby. I am SOOO EMBARRASSED!!!! Look at my non-Web 2.0 colors like BLACK. Even my little kiwi up the top is like, totally 2002, and waaaaaaaaaaay out of fashion. I really need to catch up and get my blog sorted.