At the Global Christian Internet Alliance, Tuesday. Berlin. Lots of 5 minute presentations this morning. I gave mine on Church Mission Society and their web strategy which has more to do with dispersed sites and empowering user-generated content than attracting everyone to a single portal. I mentioned Jonny Baker - a leading Christian blogger in UK - as a good example. I also mentioned EmergingChurch.info which, at the top search result for "emerging church" next to Wikipedia, is a pretty good effort for a 200+ year old mission agency. The prayer lava lamp was also given a test run. 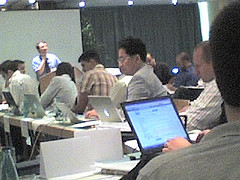 I just arrived at the Global Christian Internet Alliance meeting in Berlin. About 50-60 people here and we are listening to Dr Wolfgang Stock talking about the possibilities of the internet and the limitations of written text. Christians are well positioned in this new era, he is arguing. Good number of countries represented here - quite a few Asians. I see Lee Behar from Maclellan. I dont recognize any faces but some of the names on the list I know from emails and blogs.
Related: Casting a Global Net by Dave Hackett 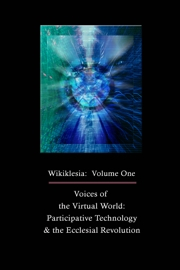 "Wikiklesia may be the world’s first self-perpetuating nomadic business model - raising money for charities - giving voice to emerging writers and artists - generating a continuous stream of new books covering all manner of relevant topics. Nobody remains in control. There is no board of directors. The franchise changes hands as quickly as new projects are created." Wikiklesia Press Release

As a missionary and church planter, I like anything that can self-perpetuate, multiply, reproduce spontaneously and keep on giving itself away until it reaches it goal. That means churches, conferences, training systems, and also this little publishing experiment called WIKIKLESIA that LAUNCHES TOMORROW [now available] on Lulu.

Volume One of the Wikiklesia project gets released July 23rd and its called Voices of the Virtual World: Participative Technology and the Ecclesial Revolution. BUY THE BOOK! My chapter on blogging is buried in there somewhere but the other chapters will be much more interesting than mine.

I have invited one of the project leaders John La Grou to my Happy Hour video cafe on Wednesday, along with some other geeky guests, and hopefully, if everything works out, John will chat about the uniqueness of this collaborative project.

Congrats to Tom and Muriel Hohstadt of FutureChurch for 50 years of marriage! They have been friends for many years and spoke at our Boaz event in Texas back in 2000. They look far too young to have a 50th wedding anniversary. Really!

In Prague right now, awaiting a car part and camping out with family and friends.

Sorry about the blogging silence. I was in Poland at Slot Art Festival which takes place at a huge old monastery in a tiny town called Lubiaz. No wifi and no internet connection.

The festival was great. About 5000 people, I think. Mostly young Poles. Jesus Freaks were here serving coffee and hosting the roundtable. I also got to catch up with Polish friends and meet some new people - including Sy Rogers who was talking about sexuality and Ellis Porter who was teaching about Buddhism and Zen and what not. The family had a great time. They learned juggling and nunchucks and diablo. Much more to tell and photos to come when i get my computer working properly.

Derek Chapman and I were working with Fuse Factory on the audio-visual stuff and we also did a lot of video and editing for the nightly SLOT TV.

I am in Prague right now and am catching up on a weeks worth of email. Sorry if you have been trying to contact me last week. I will do my best to get back to you as soon as i can. Peace out.

We are in Antwerp today with Derek and Amy Chapman. Shannon is here too. Nice to touch base again. Derek and I have been working on a book together for many years and we have some strong ideas on how to knock it out.

Interesting development regarding the movie "Evan Almighty", which we will see when it comes to Europe next month. Bob Beltz emailed me to say how much he loved the movie and respected it as the kind of movie that his team at Walden Media has been promoting and producing. In fact, Bob has been collecting opinions on the movie and doing a chat-by-email kind of discussion that I have been privy to.

It seems the movie had some mixed reviews and it really is a pity Jim Carrey doesn't feature like he did in Bruce Almighty. But there might be something of a long tail building up behind the movie comprising of people who really enjoy the movie's message and dont view it as a complete theological statement.

Helping that long tail along was my friend Marko who was providing do-it-yourself kindness kits through the Ark Almighty website - something that has been helping people perform their own random acts of kindness and tracking who was doing what around the country. Thats USA . .. not other countries.

Despite resembling BMI Baby airlines in the UK, the Ark Almighty location is a good strategic site and perhaps a model in partnership between church and hollywood in making and tracking an impact in society. The kits may have run out but there is still scope on the site to sign up for some random kindness stunts.