Still going through a transition and i dont feel ready to reemerge yet.

I am current unblogging. I have just been telling the Google bot not to look at certain parts of my blog that might be sensitive to certain countries and ministries. And I am trying to rehaul my blog and make it match my life in a holistic way, not just thoughts on one area.

Back from Morecambe and Cambridge

Back now in Orkney. Had a really good time in Morecambe with Graham and his church. Also near Cambridge where I picked up pottery equipment for our Coop. I took Hannah (9) with me on the trip and we stayed in a youth hostel at High Force, England's tallest waterfall.
My mum has come up for 3 weeks with us. All is well.

If you are a student in the UK and following Jesus is a priority for you then you really should sign up for Fusion Weekend 2007, November 23-25th. I am one of the speakers, but there are better choices than me. Elaine Storkey, for instance. I don't have a title for my talk yet. Last year my talk was called "The Skinny on Being Missional".

Cant tell you, yet

Transition Week for me.

- My laptop is in the shop but it will be a clean start when it comes back with a new hard drive.

- I am upgrading my responsibilities and getting more organized for 2008. Growing up, maybe.

- I am pulling out of something dear to me but have not done it, nor informed the right people yet. so I cant tell you yet. Its really hard - like leaving a lover - and I am trying to do it well. Pray for me.

- Everything Must Change, by Brian McLaren. I want to hold off on my review of this book to check some things out to make sure i am on target with the issues that worry me. Sorry. I also don't have time for the conversation on the blogs on this topic since i am leaving tomorrow on a trip. Maybe next week.

- Debbie's pottery business has a name - but cant tell you that yet either.

- I can tell you this: Jake Bouma has a satirical post entitled "Everything I need to know I learned from the emerging church" and i told him i would blog it here.

BlogRush for Increasing Your Traffic

Having been asked to write a white paper on SEO (search engine optimization) for some mission organizations, I have been putting down some thoughts as a continuation of my blog post called 15 Blogging Tips for 2007.

In the midst of this process, a new service called BlogRush launched on Sep 14th and has made Technorati's Most Popular List for the past few days. Its still a little buggy but seems worth putting on your blog, especially if it generates some more traffic.

In 2002 I snatched the RSS feed from Moreover Technologies and had the only blog on the block with is own news service that updated continually. Its still there, with its java script looking a little worse for wear, but having a news feed is not really a big deal anymore. Lots of blogs have news feeds and topic specific feeds from other blogs. Blogrush, like other RSS fed widgets, is like that but its a little smarter. It sees who clicks on your blogpost headline and it also sees from whom that widget came from. Even better, Blogrush counts these factors and gives you credit, which allows your posts to make an appearance in the widgets of many, many more bloggers. 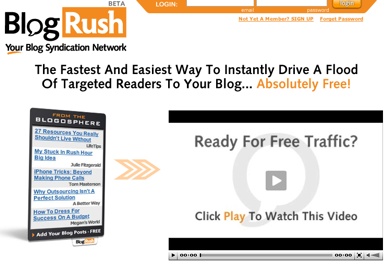 The video is worth watching if you want to understand the system.

It sounds a bit like a pyramid scheme for blogs and one that rewards the big hitters - to those who have much, much more shall be given. [Andy Beard disagrees] But it also seems more intelligent than previous models so i am roadtesting it here for a bit. Especially since it claims to increase traffic and that is the subject of my white paper.

And if you want to try Blogrush, then sign up for a free one and stick the code on your blog (lemme know if you need help). That will make you my BlogRush child and your children will be my BlogRush grandchildren, and so on, until the tenth generation. And I will be a BlogRush Abraham. YEEEEEE HAAAAA!!!!!

As usual, my friend Darren at Problogger has the skinny on using BlogRush. He recommends:
1. Optimizing Your Title (use your 40 characters wisely)
2. Choosing the right category (and perhaps swapping them occasionally)
3. Promoting it early (which i am doing right now)

Last weekend our family took a ferry out from the island of Westray to the tiny monastic island of Papa Westray.

We went through a farm to get to the monastery. 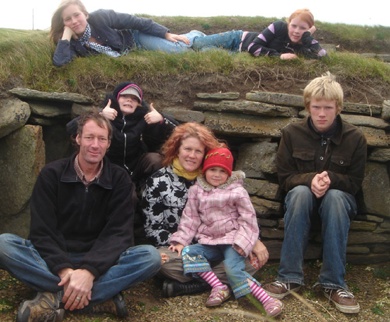 This is us, sitting in the Knap of Howar, the oldest standing house in Northern Europe. Its almost 6000 years old. Samuel (bottom right) doesnt look very interested in all this prehistoric Flintstone stuff but inside he's doing somersaults!

Monks don't live around here anymore. But back around the 8th century, this tiny island in the northern part of the Orkneys used to be the mission center for Orkney, Shetland, and probably the north of Scotland. The wandering monks were on their way to bring the gospel to Norway, Greenland and other remote places and many ended up staying here. Those bee-hive cells that the monks lived in are now getting washed out to sea. 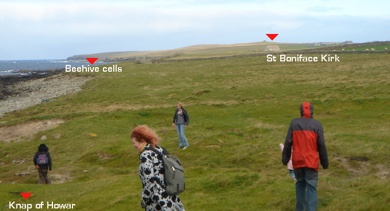 The monks lived just over the hill from that old house.

A little church building called St Boniface Kirk still stands. Its one of the few remaining pre-reformation churches in Scotland still in use. We were here last year - when i took this photo. Its origins go back to the 8th Century AD but the present building was built in the 12th Century. But people have been living on this spot since, some people say, 6th Century BC.

Thats a really long time ago. People were living here a long time before the time of Abram (Abraham) who was told by God that his descendants would be a blessing to all the families of the earth. Weird to think what would have happened if God had chosen someone here in Orkney rather than someone from Iraq.

Down the road there is another monastic settlement known as St Tredwell's Chapel. It was a nunnery of sorts and led by St Tredwell (Triduana). The chapel is still standing but its covered over.

I guess I really like this island because, when i look at the 6000 year old house and the remains of the monastery, and the old church over the hill, I think about God's promise to Abraham that involved people living here at that time, as well as families down through the ages. And I think about how it led to a response from God's people to take the blessing of the good news of Christ to all the nations, ending up monastic settlements and church buildings all the way to this remote island. Not many places where so much story is represented in one small space.

Still here. Still kickin. Just havent blogged much this week. But here is a roundup of stuff thats going on.

- The flu went through our house this week and so Debbie, Elizabeth and Abigail were horizontal for three days. I stayed healthy and ended up tending to the sick and the lame.
- Debbie is really busy with drawing up business plans for the cooperative that we are kicking off in our town. It will have about 12 micro-business enterprises including Debbie's pottery. It will be called The Sorting Room. VERY EXCITING!
- I am thinking through some ministry issues for a church retreat next week in England and another event in USA after that.
- I read Brian's new book "Everything Must Change" and will probably write a review on Monday.
- We are fixing up the room (Sorting Room) downstairs so things can happen.
- I am in the middle of a transition in ministry. Tell you more about it next week.

Our family are leaving Saturday on a little ferry for Isle of Westray and I will be preaching at Westray Baptist Church on Sunday morning.

We may get out to the even smaller and more historically monastic isle of Papa Westray tomorrow for a mini-pilgrimage like we did last year. I doubt if there is much WIFI on the island so . . .
talk to you Monday.