Its today! My birthday. I know you all remembered . . . even though some most of my kids forgot. September 7, in case you want to burn it into your memory bank for next year. I have requested a chocolate fondue for tonight. Thats about all I want this year. A big chocolate fondue with yummy things to dip in it. 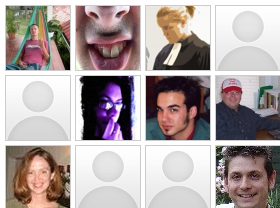 As for a nice birthday gift, you give me a click on the "Add to My Favorites" button below and register your support . . . if this blog REALLY IS one of your favourites, which I am sure it is. Check out the LOVELY people above that have favorited this blog. God bless'em, every one! Now thats a birthday present that really counts.

Michael Lindsay and Gandhi in the blogs

Some blog series on politics, power and peace that you should know about.

- Rebecca Ford of the Oxford UP blog informs me that Michael Lindsay has started to post on an interesting subject - evangelicals in power, Michael is the author of Faith in the Halls of Power and his blog series might be worth following. First post called Introductions: Michael Lindsay, Karen Hughes and America.


- Another series from Jarrod McKenna, winner of a Quaker Peace Award, who is writing on the influence of Gandhi from an evangelical perspective. Jarrod offered to post them here on TallSkinnyKiwi each week but Andrew Hamilton beat me to it. Andrew is now hosting the "Wednesday with Gandhi" series from his Backyard Missionary blog - which has been resurrected to life again after a 6 month blog fast. Check it out:

Intro
'Go Ye' and Gandhi
Ganhdi and the Prosperity Gospel

I will be speaking at the Allelon event on Missional Orders in October, alongside Alan Roxburgh and Mark Priddy. It will be a small select group of 50 people gathering in Seabeck (60 miles north of Seattle) to discuss the new forms of missional orders, Rule of Life, and how these orders are taking shape in the emerging culture. Space is limited to 50 people so you might want to apply soon. Register here.

Related: Conversation and podcast on Allelon

Jesus and the Recessive Gene 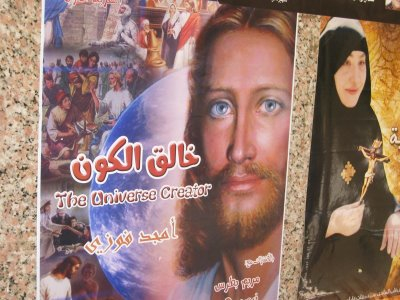 "Funny how those darned recessive genes just show up every once in a while in the oddest places!"
Scott Bessenecker, who took this photo in the Middle East a few weeks ago.

Dressing Up For Church "I found myself day-dreaming about [church] services employing the often strange objects to be found in a Salvation Army charity store. Ohhh, the possibilities! Plenty of costumes in which to act out bible stories and shelves filled with glasses and mugs for communion, games for children, Bibles and old books to reference for the teaching. Now that’s a missional cell I would join!" Andrew Jones, "Dressing Up New Stories"

New Conspirators in the Emerging Church

Tom and Christine Sine are hosting a conference next year called New Conspirators 08 and they are running a New Conspirator theme on their blog right now. Even my previous blog banner makes an appearance.

Quechup, which I warned about yesterday spammed people on my email list and one went to this typepad address, turning into a blog post. Please delete or ignore the friend request if you get an email from me this morning. This is SPAM! and its ugly. Sorry everyone. I thought I was safe because I deleted my account yesterday but I should have changed my email details as well.

Nudes and the long tail

I won't tell you the name of the nudity website that is sending me so many visitors today (about 80% in the last hour) but my blog post "Christian Nudes", mentioned on their website back in 2004 came to life again when today, 3 years later, someone posted another message on the bulletin board and brought attention to my puny little post. Thats a seriously long tail. And really, theres nothing to read and no pictures to look at on my post. Really.

Getting the Bible Wright

Pryomaniacs Frank and Dan are halfway towards a 1000 comment quest with a provocative blog post against emerging church and other movements that threaten the Fundamentalist claim to supreme power and a uniquely correct view of Scripture. 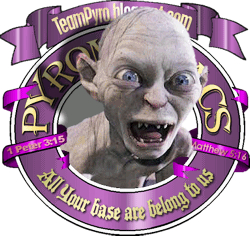 Its called . . Emerging Church: bad as Gutless Grace Girliemen? Worse than Wrongheaded Wrightophiles? Sillier than Leaky Canoneers? and it will probably break the record of 1000 posts, although the only people who will have the time to plummet its depths will be those without gainful employment.

[update: Mike Morrell has the skinny on the Pyro site and this current controversy]

As a blog post, I think it is enticing, artistic, bold, and I appreciate how it invites criticism from foe as well as friend. And although I appreciate the post, as I said on my comment which helped them progress toward their goal by one degree, I do beg to differ from Frank and Dan on a number of points . . .

as well as being lumped in with Benny Hinn who drives a much nicer car than I, who tends to his hair far more than I and whose stage-led ministry looks ENTIRELY different than mine and the non-celebrity type people i hang with in the emerging-misisonal church scene.

First off, I really think Frank and Dan's definition of "missional" does no justice to the word. None. Whatsoever. Rather than describing the grand initiative of the Triune God, our framework to understand the Scriptures and our example in Christ for being obediently sent into the world, Frank and Dan downgrade the word with relativism and syncretism.

". . . This is what the people want—verbal meat-chubbery—and frankly, from what we understand, giving people what they really want is called missional these days." Frank and Dan, Pyromaniacs.

Giving people what they want? OK - don't get me started. I have already posted about the importance of missio dei, where the word missional comes from, and why I prefer to talk about the "emerging-misisonal church".

Let me tackle the issue from another angle - something i think is more inherently problematic in this ongoing debate. It has to do with the way we approach, interpret and apply the Scriptures in our world. Let me quote from Frank and Dan in their provocation:

"And if the most central issue of the Bible—how can man be just before God?—has been misunderstood by basically every one of the holiest, godliest, most consecrated and devoted men of God for centuries; if, that is, our most elder brothers in the faith have, every one of them, answered that question wrongly, and only a specialist engaging in specialized sub-category studies can unearth the true answer to this basic question...

...it makes you wonder not only why God wrote the Book, but why He made such a poor job of it. Why couldn't He manage to get it Wright...er, right, the first time? Why didn't He make it plain enough for non-specialists to "get" what He was saying?"
(Frank and Dan, Pyromaniacs)

The first thing that grabs me here is what is presented as the "central issue" of the Bible - how man can be just before God? Now that may have been clearly adequate for Martin Luther and others but it seems suspiciously too small to me. Too small, too humanistic, too individualist, too man-centered.

Continue reading "Getting the Bible Wright" »

There is a red flag waving in the blogosphere about Quechup, a new social networking site, and I just eliminated my account. The accusation is that Quechua is using an "underhanded" approach to request new members through mining the email accounts of subscribers, resulting in an email frenzy that is causing embarrassment and fear. That was enough to scare me out of the Quechup system, at least until things settle down and the ripples stop flowing everywhere.

I only joined yesterday at the request of friend. [Did he know he was asking me???] I noticed when i signed up that they wanted my email details and password which was a little unsettling but normal for some systems. I pretty much join all the social networking sites when i get an invite. I like to road test them and people ask me for my opinion so I need to be in the know. But this one freaked me out so I cancelled my subscription. Luckily, no invitations have issued from my account except for a friend request to the guy who invited me. WHEEEOOOWWWW!!!!

My advise is to JUMP SHIP if you are a member, until Quechua get their act together - assuming they turn this thing around. Two things you can do:
First is to make yourself "unsearchable" in your account profile.
Second is to go to "Account" and cancel your subscription.
I did both.

For the record, I have watched the progress of social networking sites, going back to The Well in 1996 when i lived in San Francisco,
which I found quite intriguing,
to Orkut in 2004
which I found too artificial,
to various Christian based sites like Xianz
which i found too insular
to sites for the very young like Bebo
which I found too juvenile,
And of course Facebook
which I find too invasive

I have to admit, Facebook has turned out to be the best and the only one worthy of my attention., I joined Facebook last year when it was a student based site because I was giving a talk to University students and wanted to be found by them. I have recently bumped up my commitment to FaceBook, am trying on a few games for size, and have gotten over my previous prejudices. It really is a great site and I might give thought to developing some apps. for it.

As for virtual relationships in general, I am a big fan of connecting on line but you still cant beat face to face. Nobody wants a virtual Christmas dinner.