Today is St Andrews Day, a day to remember St Andrew, one of Jesus' disciples. St Andrew's feast has been celebrated with various kinds of food in Scotland over the years ranging from wild hare, singed sheep' head, haggis, and fish because Andrew was a fisherman when Jesus called him to follow. Some say any good Scottish food will do.
I have always been attracted to St Andrew because we share the same name, and because his first impulse when Jesus called him was to go and find his brother.

I ask this every year. This year, MOST people in my world say that the label "emerging church" or "emergent church" does not define or describe the kinds of ministries they are doing. That also means that many books on the subject do not speak for these people and most of the criticism misses its target. Not only that, but using the term is problematic for some Seminaries and ministries. What do you think? Is the term helpful to you or a hindrance?

I made 2 casks of Christmas Ale today. One is for The Orcadian Newspaper's christmas party next month. They were kind enough to sell me some printing equipment for a good deal and were hoping tyo get some more beer money for their party. I am sure my 2007 Orcadian Christmas Ale will do the trick. DONT YOU JUST LOVE BARTERING!!! The other cask will be for our Christmas season.

Recipe: I used some darker malts - chocolate and crystal as well as pale malt. I threw in some northern hops at the start and fuggles towards the end. And to finish I used some crystalised ginger, pepper, cinnamon, nutmeg, extra sugar (had no honey) and a dab of cranberry sauce -which was probably a dumb move because it might have some bacteria that fights the yeast . . . but we will see. My buckets are in front of the heaters for a few days so I wont feel bad about leaving the heaters on.

- "The heart of philanthropy is spiritual." Left brain, right heart is a great concept, used here on the subject of philanthropy by Randall Ottinger. I might add that the "right" also could refer to being 'upright' or even 'righteous' in our generosity.

- NYTimes has an article on philanthropy and blogs. Quote:

"Philanthropy has been late to the game of blogging, hardly a surprise in a field that has operated on personal relationships and reputations earned over decades. But just as charities have learned in recent years to use e-mail blasts to solicit support, their executives are getting used to a digital world in which there are fewer secrets than in the past."

Tonight I give the Christmas message at the Christmas Tree lighting ceremony for our little town of Stromness, Orkney. Thanks to Rev. Fiona Lillie of the Church of Scotland for the invitation. My plan is to read out a short poem by Orkney's most famous poet, the late George Mackay Brown from Stromness. Its called "Hamnavoe Women and the Warbeth Bell: Midwinter" and by blogging my message here, this will be the poem's first appearance online. I know this because I have been searching diligently and without success to find the whole poem, which, incorrectly referred to as two separate poems on a number of news articles, is the inspiration behind Sir Peter Maxwell Davies new Christmas carol for the Queen and Royal Family this year.

BBC says: The carol will be sung to the Queen and other members of the Royal Family at a private Christmas service in London. It will be performed by the choir of the Chapel Royal at St James's Palace, accompanied by just an organ. Sir Peter - or "Max" as he is widely known - was appointed as the Queen's Master of Music in 2004. Among the official duties of the composer, who lives on Sanday in Orkney, is to write a Royal carol every Christmas. It will remind the Queen of Scotland - and Orkney in particular - at Yuletide. Scotland is a place very close to her heart. He has based this year's carol on Mackay Brown's poem Hamnavoe Women and the Warbeth Bell: Midwinter, which opens with the lines: "One said, 'I thought I heard on the stone a midnight keel.' (It was the Yuletide bell.)"

So after coming up empty handed online, and getting a little desperate, I called up Joanna Lawson, writer and personal friend of George Mackay Brown. And sure enough, she had the poem in her collection and emailed it to me. Here it is:

Fellowship of the Eggs 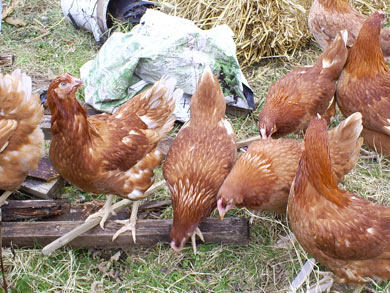 We had a meeting last night with members of our Egg Co-op and a new group of couples that are taking over our original hens to form a new Co-op. They had lots of questions about hen management and egg gathering and we, with our many months of experience, were able to pass on some wisdom and restrain ourselves from words like "eggcellent". Once or twice, when discussing the various outbreaks of hens into the neighbourhood, I felt the need to blurt out "THEY"RE ORGANISED!!" in Chicken Run fashion, but otherwise I conducted myself well.

I say "fellowship" of the eggs because the English roots of this word are "fēlagi" - an old Nordic word meaning "shares in livestock".

The good people at Christianity.com have me know that a beta version of their Bible Study tools is now available online at bible.christianity.com. Apparently you can customize your Bible, write notes, and highlight it with colors which means that some of my über-reformed friends can now create their own Red Letter Version of the Bible by highlighting the word of the Apostle Paul in RED.

On the negative, apart from not finding a Greek or Hebrew text of the Bible . . . [HINT HINT] . . . I had to wade through that familiar brown and burgundy colored interface with its soccer-mum-evangelical-driving-dodge-minivan to the precious-jesus-christian-bookstore vibe but hey . . . maybe that color palette will hit the right target group.

On the positive, Bible Study Tools is easy to use and FREE and its good to see NIV version as one of the 26 Bible translations on offer. The many daily devotional sites, including one for dieters, are handy but no RSS feeds to pop into your News Reader. Not yet, anyway. And did I say it was FREE? 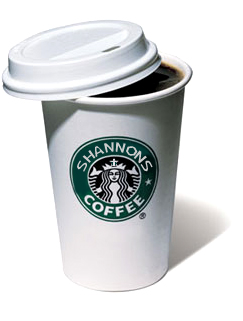 Last night we went with Shannon Hopkins to her NET meeting - Network of Entrepreneurial Talent - on the HMS President. Nathalie McDermott of OnRoad Media gave a really good talk on social enterprise as did some other young ladies from a fair trade startup.

After that we saw our mutual friend Jo Faith perform in the basement of a club. It was good to see Cindy Blick turn up also. Always an adventure to stay there with whoever else is crashing on Shannon's floor or couch at the time (this time Carl and Jessica Stricker). Shannon immediately put me hard to work, coding html for my dinner and making images for her weekly email's called Monday Morning Questions - which, btw, have replaced her old blog and thus no link to give you. But if you do want to support Shannon in her many missional entrepreneurial social enterprises (including The Truth Isnt Sexy), then let me know.

Matt Rees and many of the folk from hOME - where i spoke last year in Oxford, turned up last night for the party in Jim Barker's house. They all seem to be doing well. Also got to meet Captain Sacrament (Kyle Potter) from Tennessee.oopps . . i mean Kentucky {sorry)

Great time yesterday at Fusion Student weekend. I loved the worship/prayer stations and the whole place was really alive. The heating was out so it was freezing cold. We did some warm up exercises during my talk to deNUMBify our bodies. It was fun, though. Good to catch up with Rich Wilson, Roger Ellis, Laurence Singlehurst and others. Also enjoyed meeting Rob Waller in person and hearing more about the Message in Manchester and what the Eden Project is up to.