Our 16 year old son Sam gave a "show-stopping" performance in last weeks production of 'Chicago', here in our town of Stromness, Orkney. 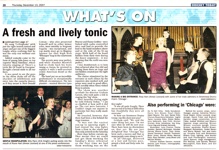 "Added comedy came in the form of young Sam Jones as top reporter 'Mary Sunshine', whose falsetto singing of 'There's a Little Bit of Good in Everyone' brought a broad smile to all our faces"
Orkney Today

"I cannot mention the show without mentioning the hilarious, show-stopping performance by Sam Jones as reporter Mary Sunshine. Making an interesting first appearance, Sam sang his song worryingly well as he hit ridiculously high notes and walked in his high heels across the stage. As the crowd, we all loved him . . ."
The Orcadian

Actually, the whole show was fantastic and everyone did really well. Special thanks to Emily for giving some voice coaching to our son.

Every year the Stromness Drama Club has a 'dame' in their Christmas production and this year, that responsibility fell upon Sam. Its his first performance here in Orkney and his first time singing in public. We are very proud of Sam for his effort. Its a shame his girlfriend Ellen missed it but she can buy the DVD when it comes out. In the meantime, here is a quick low-quality video from my little camera. 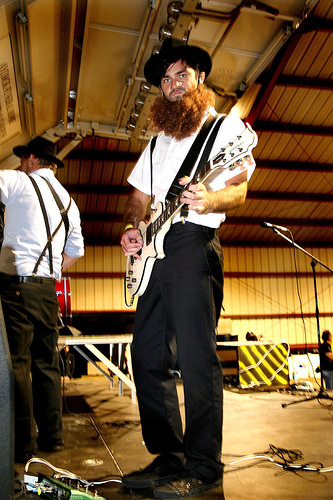 Apparently, the gunman at both Colorado shootings, Matthew Murray, was once enrolled in a DTS at YWAM but was let go for "health" reasons. ChristianPost has the skinny and Benediction is looking at it also.

There is talk of 20,000 people coming to the New Baptist Covenant celebration [see BLOG] next January but i don't know if that is hopeful dreaming or Baptist big talk. It has been suspected of having a strong political agenda but there are some fine upstanding Baptist groups who are supporting it for other reasons. Suzii Paynter, of my home church back in Austin, says that Baptists are coming "together to reconcile racial divisions, and speak in unity about priorities of the gospel" [ link]. I am considering coming and a few weeks ago I asked about some help in getting there. Sooooo . .. who else is going and do you think it is worth me turning up?

UPDATE: OK _ thanks. I decided not to go.

Danger and The Emerging Church

Excuse the title. I just wanted to attract the attention of EC critics and wish them a very happy Christmas! Hey we LOVE you people and we thank you for proof-reading everything we write without compensation. God bless you all! 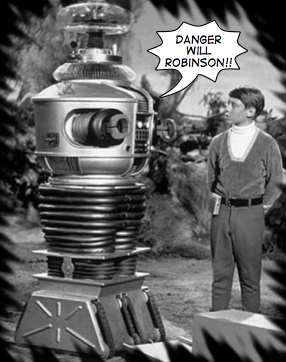 Roger Oakland is Emerging Church's Critic of the Year, for sure. But speaking of danger and the emerging church, here is some good reading:

DANGER:
- John Armstrong lands on the greatest danger for Reformed Christianity
- Chris Wright suggests that mission without reformation would be deluded, self-defeating and event DANGEROUS. HT: RealMealMinistries.org [I really like Chris Wright]
- Scot McKnight steps out on the 'dangerous' ground of politics.
- Eugene Peterson quoted in a discussion about the Golden Compass as saying, "Religion is the most dangerous energy source known to humankind”.

I have been amazed to see the changes in philanthropy over the past year due to emergent thinking and web 2.0 technology. Some of this was highlighted yesterday in the Financial Times in an article entitled Charity No Longer Belongs at Home. Websites mentioned are Kiva.org (small loans for third world entrepreneurs) and Innocentive.com (matching seekers with opportunities with solvers who have solutions). The last one is similar to Generous Giving which has been matching requests with donors for many years in the world of Christian mission. I wonder what next year holds?

Absolutely awful to hear of the shooting at the YWAM base in Denver. 9News says two dead (pictured), one critical, another inured and the 80 other missionaries moved to Golden for the time being. Youth With a Mission is a great mission organization and I have had the priviledge of teaching on many of their training bases, but not Denver. Our prayers are with the families of those involved and the other missionaries. Avarda police are working hard to find the suspect.

Update: Apparently, the gunman at both Colorado shootings, Matthew Murray, was once enrolled in a DTS at YWAM but was let go for "health" reasons. ChristianPost has the skinny and Benediction is looking at it also.

First of all, I am now allowed to tell you that our new media book won a coveted award a few days ago from the Society for New Communications Research. My chapter is on the dark side of blogging, a haunting confessional piece called "The Ugly Blogger". The other chapters, although not nearly as metaphysically searching and psychologically demanding as my own [he he he] are also great and you will recognize a lot of bloggers from my world - see the list at Microclesia.

The book is part of the Wikiklesia Project and is called Voices of the Virtual World: Participative Technology and the Ecclesial Revolution. It was conceived in May 2007 as an experiment in collaborative pubilshing and is described as a "collective, chaordic conversation on how emerging technologies are impacting the church." You can buy it as e-book or paper version on Lulu. I bought both but I found that, at 340 pages long, the paper version was easier to read.

Anyway, all proceeds [and i mean ALL - I got nothing for contributing and i even had to buy my own damn copies] go to social oriented charities, with a focus on stopping human trafficking. Which reminds me, the Truth Isnt Sexy Campaign, [not connected to the book] desperately needs some money to buy more beermats for pubs in UK. Let me know if you can help and I will connect you.

Mitt Romney on Faith in America

American Gov. Mitt Romney tops the list of the most search tags today in the blogosphere, all because of his speech "Faith in America"