The Fourth Sector and Emerging Mission

UPDATE: That article is now online at the CMS website under "Mission and the Fourth Sector".

ORIGINAL: I just wrote an article about Co-operatives and social enterprises for a missions publication. I made reference to our new venture - The Old Sorting Room - which we will launch in a few months and which can only be described as our monastic-inspired cooperative-run social-enterprise micro-business fourth-sector for-benefit organisation. For lack of a better word. Or lack of any word at all that describes it.

Fourth sector is a newish word that appeared on the radar last year after New York Times ran a piece entitled "Businesses Try to Make Money and Save the World. The fourth sector is a word used to describe the new organisations that straddle the line between government, business and charity. I have been exploring the idea of the fourth sector and missions, since this blurring of boundaries has been a common thread in the missions world for a long time. 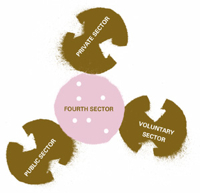 I believe the ideas put forward in the 1850's by Henry Venn of the Church Missionary Society on the kind of economic structures necessary for Sierra Leone to be self supporting were indicative of the first known cooperative of the 1840's in Rochdale as well as cooperatives in general since that time. Venn's suggestions included directives for 1) credit unions, 2) social welfare organisations, 3) micro-business enterprise for production, 4) fair trade and product distribution through a cooperative store and 5) resources for training and education. He uses different words but the concepts are the same. Without financial sustainability, his goal of the "euthanasia of the mission" would not be possible.

I also think the International Missionary Conference in Tambaram, Madras in 1938 landed on the right place (cooperative living and cooperative business ventures like Kagawa's Christian Co-operative movement in Japan) as an answer to the economic issues of mission when Western money was drying up and foreign mission structures were suspect.

Anyway, I will put up a link when the article is published. In the meantime, here are some links to articles on the subject.

Related Resources:
Open Teams and the Entrepreneurial Organization
Businesses Try to Save Money and the World (PDF)
Mixing Mission and Business: Does Social Enterprise Need A New Legal Approach? Highlights from an Aspen Institute Roundtable by Thomas J. Billitteri
FourthSector.net on For Benefit Organizations

Fourth Sector (PDF) article from Danish perspective
William Shutkin asks if the fourth sector is not a new specis of capitalism in The New Evolved Capitalism.
I also bought a few books on Kagawa of Japan to research his use of Christian Co-operatives.

Birthdays in the house.

Birthday rush here at our home. Samuel's birthday today. He turns 17. Elizabeth turned 15 on Friday. Hannah had her tenth birthday party this weekend - a special Dr Who themed party that was a lot of fun but it really wore us out. Special dinner tonight for Sam and then a combined party next weekend for the two older kids, and then are are done for a few months when Tamara turns 6.

My geeky web-designing friend Joshua Rudd sent me a cool link this morning. Visualizing the Bible by Chris Harrison. The image below is from the various cross references. 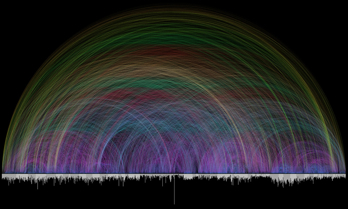 - The issues of politics and environment will play a role in this weeks New Baptist Covenant gathering in Atlanta.
Download The Agenda here and read some thoughts from Luke 4 that participants will be interacting with at the conference.
Check out Bruce Prescott's New Baptist Covenant blog for the skinny.

- In this interview, Brian McLaren answers some really tough questions on some hairy topics. I am glad to hear him affirm the major Christian creeds and talk about hope in the second coming of Christ. These were two of my concerns about his book.
Full transript of Interview at Charlotte Observer.
HT: Steve Knight

The Davos Question: Can You Answer It?

Have an answer for the leaders at DAVOS? Submit a video here or watch others answer it.

Related: And this isn't the answer for the world's problems, I admit. But I have spent part of this morning researching the use of co-operatives as an equitable means of doing micro-business in cross cultural contexts, and one that enables social transformation to take place. I am reading through an old book (1960's) on missions and co-operatives from a Catholic perspective, and, more practically, we are fixing up our studio/art/retail space downstairs to launch our co-operative this May. It will be called The Sorting Room and there will be about 12 micro-businesses connected to it. All the profits from this social enterprise go back to the artists and we hope to launch a charity that will enable other Co-ops to start up in less fortunate places. Anyway ... maybe not a global problem solver, but certainly a big help in our little Scottish town of Stromness. Got to start somewhere.

Speaking of co-operatives, did you know the word "fellowship" means half-shares in a cow? Check it out.

"If anybody sees my band, please don’t tell them that I’ve been up this early,"
Bono, this morning at Davos. You can read what Bono and Al Gore were saying about carbon emissions.

I told you about the first time Dallas Theological Seminary tackled the subject of the emerging church. I thought they did a really good job. The next installment is now available. Its called Key Topics in the Emerging Church by 4 teachers. Part 1, 2 and 3

Again, I like their tone and approach. But it does sound like a bunch of guys who have read some books on the emerging church and are offering their opinion. I don't sense the passion and personal connection that comes when teachers follow their students to the missional edge of the communities they are transforming and come back to give an explanation. They seem to be explaining the books of people far from them, their seminary and their students. Exception is Dan Kimball who, quite rightly, gets good treatment during the sessions.

Terribly upset to hear about the tragic death of Heath Ledger. Our family loved him in A Knights Tale and we used to watch for him in other movies. I always felt a special connection to him because he was born in Perth, Western Australia, the city that was my home for 7 years and is still where my mum and sisters live. PerthNow has the skinny. You can post your condolences to the Ledger family here.

Heathrow crash miracle- on a wing and a prayer

The leading headline on the Sun paper today is "Plane on wing and a prayer", accompanied with a picture of the Boeing 777 that crashed smoothly and without loss of life in Heathrow two days ago. The pilot , Senior First Officer John Coward, said he was "only doing his job".

I flew into London Gatwick a few hours before the crash, to get a connecting flight to London. I almost always fly into Heathrow but I snagged a cheap flight from Amsterdam (50 pounds) and so Gatwick it was. I almost missed my flight but they held the plane to let me on. If I had waited for another flight, I dont think I would have made it home.
My wife and daughter are not so lucky. They flew in from Prague this morning and were hoping to connect at Heathrow for Scotland. Uh uh! They are stuck in London for the night and will come tomorrow instead. Must be quite messy for all the passengers.

Continue reading "Heathrow crash miracle- on a wing and a prayer" »

And that means the Brits coined the word and not the Yanks. One should know these things. Rule Britannia! God save the Queen!