I watched the movie "Once" with Derek and Amy last night. Loved the soundtrack. I really loved this song "Falling Slowly" that I heard on TV last week but didnt know where it came from. We all lived in Prague together so it was great to watch the Czech element. We even recognized the beer can from the movie. I told my wife to watch the song on youtube [hi debbie] and so here it is. 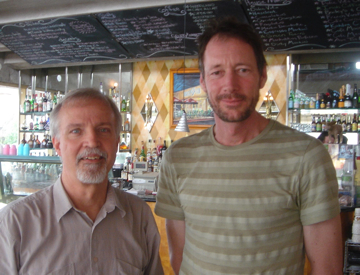 I met with Steve Hawthorne to chat about my chapter in the next version of the world famous Perspectives course (if they give it the green light) We talked a lot about Steve's prayerwalking experiences in the 80's and his concept of praying on location with information for, as he coined it, "on-site with insight". Great chat. When we talked missiology I felt him leaving me behind but that is to be expected from such a bright missions geek. Thanks for the drink, Steve!

Oh - the beard. Well I was hoping to film a Youtube tribute to Flight of the Conchords with Derek but neither of us have had time to script it. Next time.

I am hanging out with Fran Mickelborough, the world's greatest bouncer. Check out his most famous bounce on Youtube and keep watching for the slow motion bounce.

Fran's wife, Jen, (formerly Jen Andrew - I was at their wedding in Sheffield, England a few years back) has not seen the video yet due to the painfully graphic nature but she often watches her friends faces as they respond to it. Even though it looks really fun, bounces like this can take their toll on one's body and poor Fran had to take a break from his sky-diving videography job in Queenstown, New Zealand to undergo surgery. But things are healing well and as soon as they take that long steel rod out of his right thigh, he should back to his old extreme self again. In the meantime, he and Jen are living in Austin with some other artists and friends of mine - see previous post.

I arrived in Austin for Derek Chapman's birthday. He turned 40. A lot of the artists who were hanging out here as part of the Mangola event had already flown home but there were enough of us here to have a great evening. It was too windy in the morning for the hot air balloon ride that was planned. Only regret is that Derek didn't get out to see GogolBordello perform on his birthday.

Life is rough.
And then a fresh powder on the slopes makes all the difference. 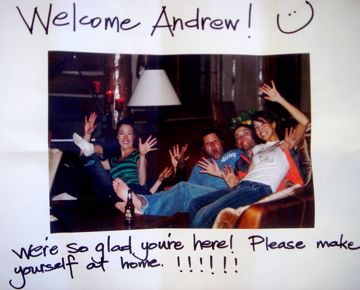 In Vail, Colorado, I stayed in a wood cabin with lots of cool people. Outside spa surrounded by snow. Valley vistas. Great food. It was a mini-vacation and I feel great. Even after a hard days skiing. I didn't blog but if you were in my shoes, or in my hot-tub, you probably wouldn't feel like blogging either. Thanks to everyone who made it happen. Really!! 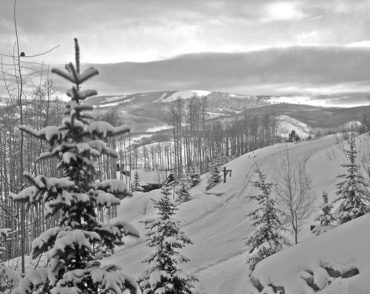 "Groomed By Angels"
a blessing for the family in Vail.
by Andrew Jones, March, 2008

May the blessings of God fall on you
like the powdered snow.
May the sweet sound of the songbird
carry your conversations into new vistas.
May the mountains that block your way
be thrown into the sea
and the valleys of injustice
be leveled by God's outstretched arm.
May you turn on your toes
to follow the path carved out before you
and may He strengthen your knees
to carry the foreboding weight
of possibilities yet unattempted.
May the winding runs of your pilgrimage
be groomed by angels
and may your reckless descent
into the fulness of God's future
be colored by the delightful laughter of children
and proved victorious by the One
who calls us gently forward
to something just beyond our reach
but never beyond what we can bear.
Amen.

Hopping on a plane from London to Dallas. What am i reading?

1. Draft copy of We Think by Charles Leadbeater (PDF) I tried to buy it but couldnt find a paper copy.
2. Surprised by Hope by Tom Wright which I have already mostly read once and am breezing through it again. I think might be book of the year. Really a great book.

Charles Colson Talks About The Faith

Chuck Colson, as a part of his blog tour for his new book "The Faith", honors my humble little blog today.

TSK: Congratulations on your ambitious yet comprehensive book. Well done!!!!! I know its risky but I admire your efforts to join with the other streams of the holy apostolic catholic church in gaining a wider, fuller more accurate understanding of the faith and I applaud the breadth of those authors you reference. I am familiar enough with your writings to know that "postmodern" is a negative word in your vocabulary, synonymous with "relativism". But I am also close enough to the emerging church scene to recognize that "postmodern" can just as easily mean "committed to context" or "open to the past". However, despite our disparate journeys and the words we chose to define them, I think many of us are finding ourselves on a similar a quest to rediscover the historical foundations of our faith or, as D.H. Williams put it, to "retrieve" the Tradition that has informed our practice through the centuries. So my question is "Why now?"

Chuck Colson: "I do understand the way in which you use the postmodern era. And of course it has some good aspects to it. For one thing, the reliance on experience enables us to make our personal encounters with Christ more relevant to people. But your focus on “retrieving” the tradition is very valid. A lot of the emerging church people get this—they want to go back to our roots; they want to find that original apostolic Christological consensus. I applaud that. You will notice in chapter 4 of the book that I distinguish between the “emergent community” which rejects the Bible, and the “emerging movement.” There’s much about the emerging movement that I applaud."

TSK: Thanks Chuck. Actually, I don't think I have come across an emerging community that rejects the Bible [there probably are some - maybe I should get out more!] but I have found a few that have rejected an overly scientific, reductionist approach to interpreting the Bible reminiscent of Enlightenment thinking, a Scottish common sense realism, or even a semi-gnostic view that is disconnected from time and space. But there are many communities and individuals who have begun to ask how the Christian church has understood the Faith since the beginning, not just the past 400 years. Your book is an encouragement in that quest. Hope the rest of the tour goes well for you. Thanks again for your response.

Check out the whole tour:

Related:
My thoughts on "postmodernism" if I was to use the word around church folk (i don't any more)

This coming week's highlights, so that you can shift everything in your life to coincide seamlessly with my blog.
[AS IF . . . ]

Today, Debbie comes back after 3 days at the National Scottish Pottery bash in Pitlochry.
Tuesday I go to London, again, and meet with Shannon Hopkins. Charles Colson turns up here on my blog to talk about his new book "The Faith"
Wednesday I go to Colorado to meet some people interested in new forms of mission and to hang out with Elbert.
Thursday I will probably post an email interview with Brian McLaren that may shed some light on his book "Everything Must Change".
Weekend in San Francisco Bay Area for informal meetings with the same folk from Colorado and their family. Not sure if i will have time to connect with the SF emerging tribe or not. Or even if i will have time for my mandatory breakfast at Pork Store Cafe on Haight Street.
Monday afternoon I am in Austin, Texas for Derek Chapman's birthday and then some more meetings with Texans over the next few days.
And then home to consider how many trees we will need to plant in Orkney to offset my jetset.

Apart from that, not much going on this week.

A moment from the Small Missional Communities Conference 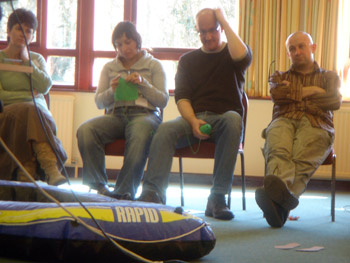 Jim Barker holds the wool for Kiwi knitter Becky Kiddle while Jonny Serton takes off his glasses, probably to contemplate on whether he would be holding wool if he was sitting next to Becky or not. That blow-up boat lost some of its buoyancy over the 3 days in which it sat unpretentiously in the middle of our conference circle, reminding us of the challenge to set sail with God.

I had an hour to spare in London so I completed my usual pilgrimage to the Tate Modern. Doris Salcedo’s 'Shibboleth' in the huge Turbine Hall looks at first like an empty room in between installations. And then you notice the crack in the floor and you are drawn into it .

I came in at opening time and got to take some pictures before the crowds came. You can see the scale of this installation by the size of the man. And this is only part of the crack. 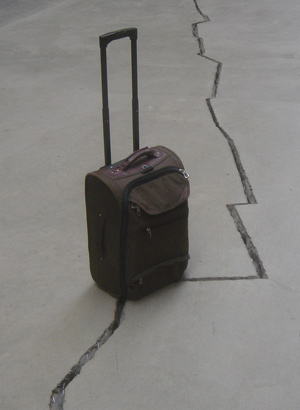 According to one interpretation, Salcedo's huge crack in the floor represents the gap between white Europeans and the rest of the world. I suppose my suitcase on the crack is a picture of my effort to bring God's healing reconciliation to that crack as I travel around Europe and beyond. Thats why I have chosen it as my banner for this month. And because it looks really cool.