1 am on the wrong side of town

thank you
from
me
to
her.


My good friend Phuoc-Tan, who you will know from previous posts and his Duo blog, has released his first book of poetry called Lights out & other poems – Wake up! series Vol. 1 You can download it free at Lulu.

Phuoc-Tan came to the UK as a Vietnamese "boat person" and became a medical doctor . . . a Histopathology Specialist to be exact. He is now 33 years old and we are hoping that one day he will make good [he he he . . hi PT!] Phuoc-Tan used to live with us in London, right before he married a girl from our youth group in Australia - Maggie Blick - who is an award winning novelist and also a dear friend of our family and supporter of our adventures. I took some funky video of their wedding but still haven't found the time to edit it into a little movie - my apologies!

So Phuoc-Tan - congratulations on your fabulous book! Don't give up your day job just yet, but please keep on writing. We look forward to the next installment.

Offending Blogs: Should they Stay or Should They Go?

"Alexander the coppersmith did me much harm"
. . . said Paul to Timothy, without fully appreciating the legal ramifications of such a potentially slanderous statement should Alexander object and take action. 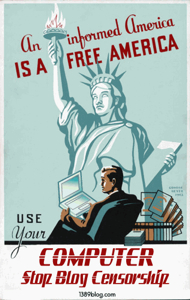 A BIG conversation going on over the last few days regarding two men who are both occasional commenters here, Ken Silva and Richard Abanes. I had email discussions yesterday with both men who I consider friends but hard-headed friends on different sides on an argument. From what I can figure out, Ken posted an article about Richard that Richard thought was slanderous and so Richard complained to Ken's ISP and asked to to have the page taken down. Because Ken refused to take it down, his entire website was taken down by IPower, the same ISP that took Ingrid's Slice of Laodicea down last year.

Ken has since got a new ISP and some help rebuilding his site and the offending article, now three years old, is back in business. But the battle still rages. It was suggested Richard tried to sue Ken (which is false) but the question remains about whether Ken should keep the article online or not, and whether Richard did right by calling for action without talking to Ken. I think Ken should try to be critical without slanderous and he is probably stirring the hornets nest by overreacting. But whether Ken should remove that page is a tricky question with serious consequences for censorship in the blogosphere - which is why I am bringing it up here.

What do you think?

I was thinking about my own policy. Most of the time, I am responsive to requests to change, edit and sometimes delete material that people find damaging. Of course I try not to write a nasty post in the first place but sometimes I find weird and offensive surprises in the comments. Once or twice, someone has left a comment that was in the form of a complaint about a person or their business/ministry and I have  leave it there for the sake of truthfulness and correction. We are all entitled to free speech.

Other times I deleted it as slanderous. I guess each case has its own considerations. 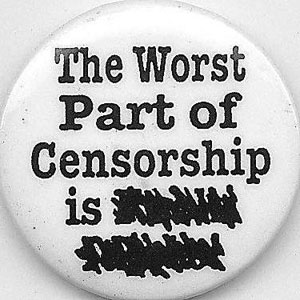 But there are ten thoughts that come to mind on how to handle offensiveness in the blog world:

1. Back up your entire site in case someone or some evil company kills your blog. I have used an old program called Pagesucker that literally sucks ups all your pages and puts them on a file. There might be some new apps that are better.

2. If your blog does disappear, you can use the wayback machine to find it again.

3. Talk to bloggers directly if you have a problem and if they don't listen, bring a few others into the conversation. If they still don't listen, maybe you should take it higher but there is a process to respect. But Christians should not resort to legal pressure among other Christians. (and again, Richard did not do this)

4. If you are a controversial blogger, dont use iPowerweb.com as your ISP (oooh - is that slanderous?)

5. Bloggers should be contactable - put your email address on your blog.

6. If you are worried about censorship, download the Handbook from Reporters Without Borders

7. If you really have to delete something immediately, and go the extra step of purging it from the Google search engine cache, you will need Google Webmaster Tools just like I needed them. I did this once when some harmless info on my site proved dangerous to some friends in the Middle East.

8. Emails from someone else should not be published on blogs without prior permission.

9. Attempts to stop or censor blog information will often result in heightened attention, more links and therefore more publicity than if just ignored in the first place.

10. Try being nice in the first place :-] and soften your tone. Like, dont use lawyer voice or CAPTIALS because it scares the hell out of people.

Ally in the comments below points out that a similar spat is happening with Lambeth cartoonist Dave Walker and Mark Brewer regarding Dave's cartoons on the trials of the SPCK bookstores. The skinny is here. And a crash course on related legalese for bloggers is here at ministry of truth 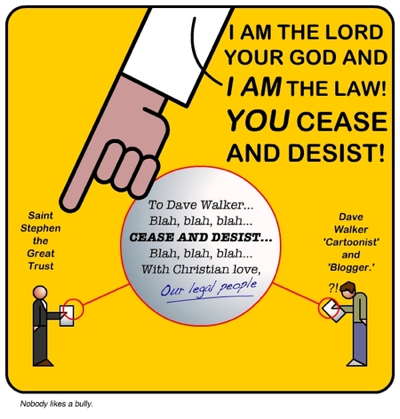 [Image from Jon but can be found here unless you are a lawyer looking for a blogger to sue, in which case try this link]

Related: Where in the World is Slice of Laodicea?

This morning I am at Crown Terrace Methodist Church in Aberdeen to hear missiologist Andrew Walls preach and then I will be having lunch with Andrew. I hope he can cook! Really excited about this. Dr Walls is arguably the leading expert on the World Missionary Conference in Edinburgh (1910) and how it panned out over the next century. You can read some of that on this Edinburgh 1910-2010 PDF.
hhhmmmm . . . i should probably start a new blog category called "Shameless Name-dropping"

Today is Slow Sunday in the UK, a day to celebrate slowness - slow food, slow pace, slow and enjoyable day. My family is cooking a slow stew with beef bones today but the fact is that we changed over to a slow food menu for Sunday a long time ago and have been sticking at it. Sunday is a Sabbath for us, not a day to get all stressed out in the kitchen and go Ramsay on everyone who slows down the process. 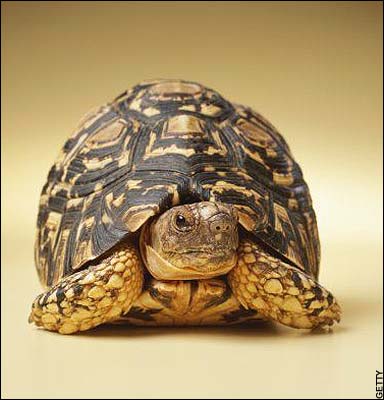 The Telegraph has a good article called "How To Go Slow" that I read on the train yesterday somewhere near Glasgow. I am taking a ferry home today from Aberdeen and it goes slower than anything so I think I am qualified to recommend this article. How to Go Slow also recommends other ways to slow your life down. Heres a couple of things from the article and a few I have discovered myself over the past few years to go slower:
- Baths instead of showers, and really early in the morning so I can stay longer.
- In 2005 I took off my watch and went without one for a year. I first did this as a result of advice from Robert Banks in a spirituality lecture at Fuller Seminary. Once I went almost 2 years without a watch.
- Photography with an old manual film camera. I have a medium format camera for black and while film and am building a dark room to develop my own photos. I am learning to sit and wait for nature to put on its show, to wait, as a Czech photographer once said, for the "music to play".
- Walk everywhere and shop local. We now can go for days without using the car.
- Bake bread for our homemade pizza every Friday. It takes a couple of hours to rise. Thats slow.
- Slower but better sex. Sorry. You didn't want to hear that.
- Travel less - not accept so many speaking invitations but be far more picky so i can stay at home more.
- Slow food and slow cooking on a sunday and more often during the week - pot roasts are great. A few days ago I cooked pork shanks in our wood stove for 4 hours.
- I have a vintage treadle printing press that does one page at a time and am about to make some books . . . very very very slowly.

Have a nice, slow Sunday.

Thought for the day - Jesus was not in a rush and refused the hectic schedule of his disciples who were hurrying things up to get the team to the Festival in time. "For you guys", Jesus responded, "The time is always right. But my time has not yet come". The disciples hurried on up to Jerusalem but Jesus arrived later on, in his own time, which just happened to be, as always, precisely the RIGHT time. Think slowly on that one.

". . . decisions could be made in this gathering that I believe really could change history -- of setting the challenge of entering this emerging, post-modern world as disciples, as apostles of Jesus Christ, we could change history."
Brian McLaren at Lambeth 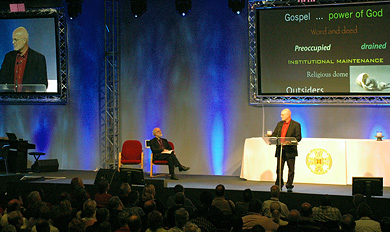 All the reports seem overwhelming positive about "Emergent Evangelist" Brian McLaren speaking at Lambeth. Episcopal Life have a good article with plenty of quotes and Lambeth Daily has a chat with Brian. Bishop Alan really liked his thoughts also. Anyone else there have some thoughts or response?

Iggy is asking prayer for Jim Bublitz who has serious health problems and may need a liver transplant. Jim is also closing up his website OldTruth.com Jim Bublitz is a critic of the emerging church but we like him because he is a brother, a good man, a leader and someone that has taken the time to give his input to us - despite it taking a negative slant.
I also had a blog-debate with Jim that has been posted here. We need critics like this.
Can we pray for Jim? Should we start an offering for his medical expenses? Anyone?

The bloke from New Zealand

This image is from my Aunty Olwen who lives in Queensland, Australia and keeps me updated with the latest Aussie chatter and funny JPEGs on the bulk emails. This one might just be the story of my life!!!!! 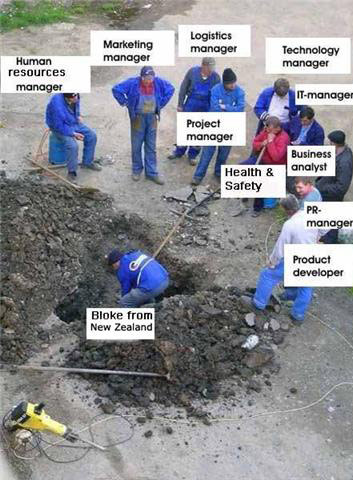 Gutenberg and the Press that Made the Bible

Recreating the printing press that Gutenberg likely used to print his famous 42 line Bible on a short TV series now on YouTube. Thanks to the people in my Yahoo letterpress printers group for the links. BTW - I managed to get my printer into my print shop last week after breaking down a wall. Very exciting.

The 60th Shopping Week just started here in Stromness which is pretty much the biggest week of the year. Lots of activities and festivities. 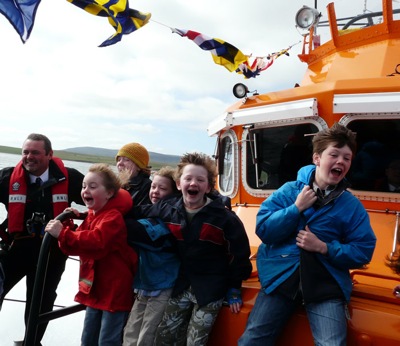 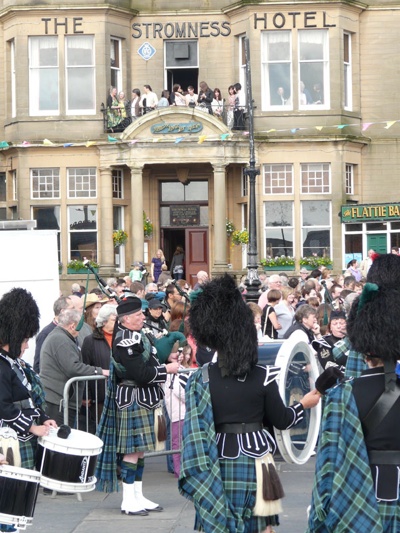 and of course the obligatory bagpipes.

New website launches today called ideas4all.com. Share your ideas or your problems that need a solution. Easy. Teilhard de Chardin would be impressed with the global brain idea. Thanks Patricia for the heads up. I already posted my first idea (sunglasses with camera for streaming live video through phone networks to sites like QIK.com) and my first problem (how to locate potential social entrepreneurs for possible funding or training or networking)