UPDATE: I am reposting this because the old one got messed up and didn't come up properly. Also, there are some new articles worth reading like Madeleine Bunting, and ZMag. There are also some books including a critical response to New Atheism by John Haught and a more cynical response by my friend Becky Garrison called The New Atheistic Crusaders and their Unholy Grail.

ORIGINAL POST (2006): The New Atheism is making a splash. Here is the skinny.

Last year I read a good history on the key figures of early atheism. Its called God's Funeral by A.N. Wilson (1999) which gets its title from a poem by Thomas Hardy. It was interesting and informative but there was no expectation that atheism would make a comeback and honestly, i wondered whether i was wasting my time reading the book. Now its 2006 and New Atheism has become a hot issue on the blogosphere with its fundamentalist intolerance for faith and Christianity.

Richard Dawkins' new book The God Delusion is part of that conversation. I was tempted me to part with £16 last week but after thumbing through the book, i didnt think it a serious reason to part with my money. Alister McGrath agrees, calling it his "weakest book to date" [Wikipedia] You can always read the free essay by Dawkins released the same day as his book called "Why There is Almost Certainly No God.

Abigail turned 13 yesterday. We restored a bike for her. Almost finished it. She has a paper round and is the third of our kids to get a part time job - Sam and Elizabeth are both working at local restaurants.
Debbie and I are away for the weekend. Good friends of ours, Caroline Agius (UK) and John Cienki (USA), are getting married in Chichester and we are going down for the wedding. In fact, I am marrying them, although it will be a wedding blessing and not a legal marriage ceremony, since they are going to USA for that immediately after.
Jenna White is still with us and watching the family over the weekend.

Mark Berry has thoughts on the latest from Florida and the Todd Bentley scandal. He quotes Peter Wagner. Worth a read.

How Should We Then Blog?

In a few minutes I teach a session at Greenbelt Festival on new media, blogging and the 10/24 wwwindow. I just came across an old poem I wrote in 2005 that has got buried and forgotten. Here it is again, as it comes out today.

how should we then blog?

to reawaken childhood dreams
to publish our journeys
to record our stories
to be noticed
to be heard
to point to
others
who
must
be heard also.

Greenbelt is upon us again. 20,000 people all dressed for summer, shivering under unexpected showers and looking for shelter in the tents and stalls scattered around the Cheltenham Racecourse. Thats how I usually remember it. Although last year was really scorching.

HELP? I have my sleeping bag but not a tent this year. Got room for me in your tent? Let me know. Glamping sounds fun but i can also rough it.

I leave Belgium on Friday and go straight to Greenbelt Festival Unfortunately I will miss the emerging church roundtable on Friday at 3pm but I know many of you are attending. Try to get there early because it might take longer than you think to get in, and then find the tent. I am speaking here from experience, having organized the emerging church roundtable in 2004 and then arriving embarrassingly LATE for it.

My two teaching sessions at both at the CMS Small Tent Venue otherwise known as the Blah Tent.

Monday 2:00pm Transcoding Mission for the 1024 window. We will look at what it takes to let Christ's face play on ten thousand computer screens and how you can be one of those people that put him there. We will also discuss the shape of mission and church in a Wiki world. Geeks and non-geeks welcome. Dont leave Greenbelt too early - come and hear me speak.

MY BEST BETS FOR GREENBELT: (not a pun, even though Greenbelt meets at the racecourse)

Best food: I have food to eat that you do not know, because i keep it a secret, but now the mystery will be revealed. Go to the Organic Pork trailer and order the pork and apple burger and then smother it with their red onion chutney. Really! Honestly! You will thank me!

Best Other Stuff: Here are the people to meet and things to do besides my two wonderful life-changing sessions:
- I will be helping Shannon Hopkins with a really exciting stream inside Greenbelt called NET (Network for Entrepreneurial Talent) and I am speaking on one of the panels. Look out for it!
- Ruth Valerio is worth hearing, as is Frank Schaeffer, Joel Edwards in a new role this year, Brian McLaren, fresh from addressing Lambeth, will be speaking 3 times but check out his "postmodern and postcolonial" talk on Sunday. Doug Gay had some coherent emerging church wisdom with a Scottish accent last year and is tackling political involvement this year. Barry Taylor and Fuzz Kitto are both living legends and larger than life and both will find a way to offend you in a new way. Gareth Higgins is a thoughtful fella also.
- Farewell to Larry Norman
- Aradhna are playing their blend of Indian worship music. Worth seeing. They rocked Greenbelt a few years ago. Read my thoughts on them here. Juliet Turner I met in Belfast and really liked. MxPx are well known in USA.
- Dave Walker has found himself in the middle of a huge lawsuit-blog controversy and has a hair-raising war story to tell. Find him at the Wibsite meeting at the beer tent, Saturday 4:30
- Having used Manga to teach missions in Japan, I am interested to hear from the guy who recently created a Manga Bible
- Greenbelt Art School is new this year.
- Hymn singing at the organic beer tent, despite noise complaints from neighbours, is a regular big event but i cant find it on the schedule for this year. Anyone know?

Beyond that, pretty much everything going on at the CMS venues, in particular the CMS small tent venue where I and my scruffy friends are presenting, is worth keeping an eye and returning to. What would you suggest?

Things going really well in Belgium. I am spending 4 days with American missionaries from mainly Baptist churches. Nice people - about 50 or so. I taught a few sessions and am leading some informal discussions as well. We went off to a cave this afternoon.

My session this morning was on the shape of the future church and its relation to new media and the structure of the internet. I thought it was interesting . . .

World Youth Day for Catholic Youth - 400,000 at the final mass in Sydney and half of them staying overnight. Thats a big event. Not all were Catholics - some of my friends from the charismatic world were there also.

Should Evangelicals "Unload the Slackers"?

I was in London this morning and I stopped in for an 11:30am service at All Souls Church, spiritual home of John Stott and a pilgrimage spot for evangelicals. Speaking of evangelicals, check out this article from the Star-Telegram.


"Evangelicals need to hew even more closely to the most conservative and literalist standards of the Bible. They need to stop making nice to attract seekers. They need to unload the slackers."

Did she say unload the slackers??????


Also in the article is this: "They’re admitting what their own studies show — that evangelicals almost never convert a native-born American who wasn’t raised in a church. That most evangelical growth comes from stealing the sheep from other denominations. And that they’ve stolen about all they can. . . They’re also admitting that most evangelicals won’t evangelize. And if they did, it wouldn’t get them anywhere because the usual methods don’t work."

On the sleeper train to London

I finally get to do the overnight Caledonian sleeper train, a famous Scotland to London route that has been in existence for over 130 years. I am leaving in an hour or two for Inverness where i catch the train. Should be good. And it should be good for the environment also. I might start doing this on a regular basis instead of flying down.

When I get to London, I take the Eurostar train over to Belgium for a missions conference. I speak twice - please remember me in your prayers. Thanks.

Heres the poster for my session at Greenbelt Festival this month. Click to enlarge. Hear me talk at 4:30pm in the CMS Small Tent, Sunday 24th August. For those unfamiliar with Greenbelt Festival and lacking in a sense of humor, let me assure you this is a very tongue-in-cheek account and should not be tried at home. 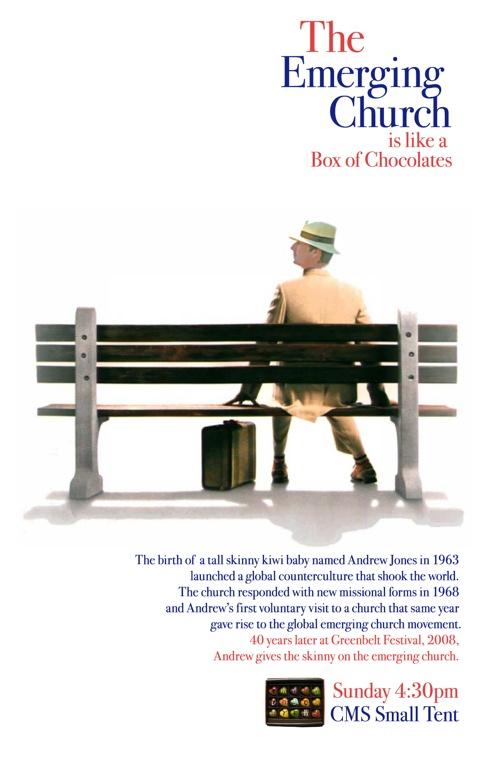 ORIGINAL: Greenbelt 2008 Session One: The Emerging Church is Like a Box of Chocolates

"According to this ridiculously subjective narrative, the birth of Andrew Jones launched the global counterculture and his first voluntary visit to a church in 1968 signaled the beginning of the emerging church movement. Like Forrest Gump, Andrew is the accidental witness who tells the story the best he can but remains mostly clueless."

I submitted the titles of my two sessions at Greenbelt Festival. They will be hosted by Church Mission Society and there is still time to edit them if you can think of something better. Love some feedback. Is it just a stupid idea or is there some value is telling the story from one person's point of view? What should be included and excluded?

My previous talks at Greenbelt are here, including The Spirituality of Blogging. 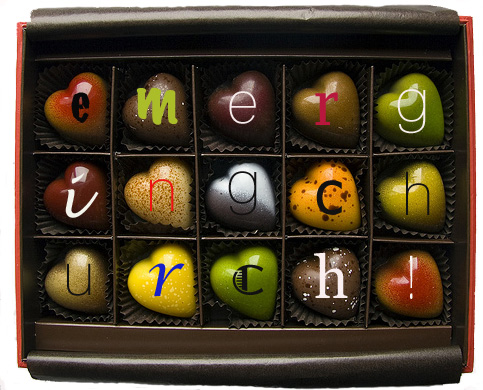 Read on for others speaking at this venue.