Some more dates and events for your consideration regarding church in the emerging culture.

USA - Reclaiming Paul conference going on now in USA with Emergent Village. Check out the Tweets . . . I mean the Twemes.
England - Big meeting on Dec 13 in England. The Tribal Generation network from Brazil are coming up to lead this event and its aimed at leaders from all over Europe who want to start churches among the emerging generation. Details here.
Scotland - Brian McLaren in Scotland (Dec 5-8) and England after that.
Ireland - Emerge meeting with me in Ireland on November 15.
Africa - "For the first time in November 2008 Lausanne will convene 100 emerging younger leaders between the ages of 25 and 40 for a Regional Summit near Jos, Nigeria. We would ask that you prayerfully consider this opportunity to invest in the development of an emerging generation of Church and Mission leaders who will help lead the Church towards the fulfillment of the Great Commission from Nigeria, Ghana, Liberia, Sierra Leone and The Gambia. Details on the Lausanne website.
Ghana - Mark Berry the missionary man is in Ghana for meetings.

And finally, I found a picture of a green van for Dan Kimball's garage. 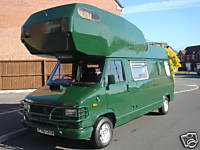 Do Dogs Go to Heaven? The Battle of the Church Signs

This one is really funny. 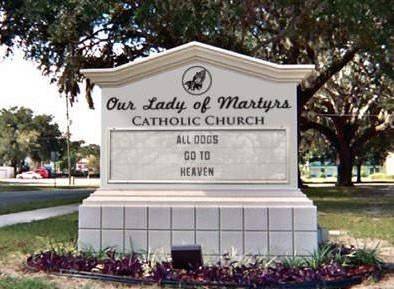 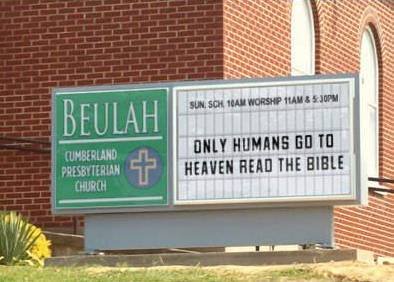 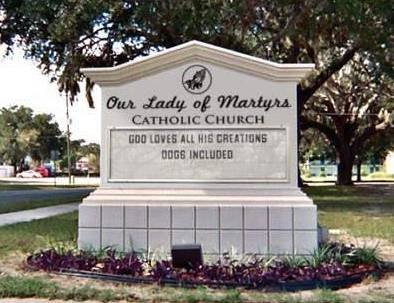 See the rest of the argument and most importantly, WHO WINS, at HappilyKim. Michael in the comments reminds us that churchsigngenerator is behind it.

I am not there at the Internet Ministry Conference but a lot of my friends are. Hi everyone!!! A blog is set up, photos are flowing, and participants are twittering with a #imc2008 in their smile. Should be some interesting chatter about social networks and ministry and stuff. Try the internet evangelism track. And the veal.

Related: I didn't make the IMC but i did make it to the GCIA last year and Godblogcon this year.

Supernatural Healing and the Good News

A few years ago, at our home in Prague, I was having a chat with a lovely new age lass. She was describing how she went to the hospital to "heal" someone and how she slowly erected this contraption beside his bed that would hopefully assist the healing process.

I said to her. "You see that guy in the next room? He is also a healer. But he just tells the sickness to go away. And it does. Immediately!"

I was talking about Chris Daza. If you get a chance, and you live in the San Francisco area, Chris is hosting some teaching sessions this week at the YWAM building. Chris is originally from Malawi and now lives in Switzerland. I first heard of him 8 years ago through Wolfgang Simson who told me about his "African Power" nights in Switzerland which always ended up with some really miraculous results and people pointed to the source of that power - who is Jesus. Since then, our families have become close friends.

Don't be expecting a stage show. Don't project what you have experienced with American sensationalism. Go and hear what Chris has to say about the place of the supernatural in evangelism and I know it will surprise you, especially if you have never heard if from an African.

I just preached on Ruth and Boaz

I preached this morning at Stromness Baptist Church despite feeling a flu coming on. A few themes emerged as I told this story about the barley harvest in Bethlehem. Yes, harvest festival is around the corner and the projectionist already had some slides of barley on the screen as backup for the worship. Seemed appropriate and timely. Especially since the Book of Ruth is about what happened as the barley harvesting kicked off with the arrival of Naomi and her daughter-in-law, Ruth.

To be honest, I wasn't sure what I would speak on this morning when i got up but I think I did the right thing in telling this story and people really appreciated it.

One theme that surfaced in the story was that of NAME. Boaz was the son of Rahab the prostitute but he establishes the credibility of his name by doing what is right and not withholding good. His name will be famous, as the village woman predict and pray in their blessing at the end of the book. 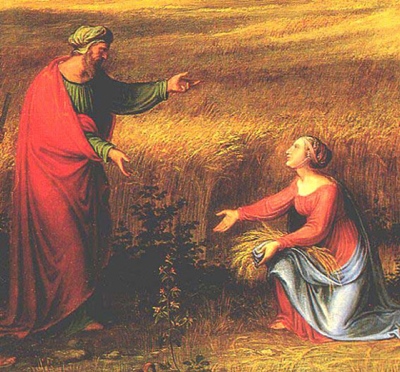 Here's a painting of Ruth looking like a sparkling young Victorian woman after a long bubble bath. This could have been an advertisement for Lux . . a long day's work in the field and yet she still looks a million shekels - just look at those clean hands!! All due to the cleansing power of LUX SOAP!

On the other hand, the closer relative, or potential Guardian, or "kinsman redeemer" as some versions have it, remains NAMELESS. He name, as we read it, is roughly translated from the Hebrew as "What's-his-name" or "Mr So and So". The lamer apparently only wanted the Elimelech's land to increase his personal worth and wasn't willing to take on Ruth and risk his inheritance so that the NAME of Elimelech could be remembered. What a loser!!!

NAMES are important. A good name is better than riches, said Solomon, who was the great-great-great grandson of a prostitute named Rahab - the mother of Boaz. Obviously, its possible to remove the obstacle of a bad name, or an unpleasant legacy, and start over again with a new name. And we, like Ruth, were once NOT a people, we are now given a new name, and are the people belonging to God.

The other theme was that of REST. Naomi wanted her two daughters-in-law to find "security" or "rest" as the original says. They found that safe place and were taken care of, through a number of ways that I wont describe in this short blog post. But there is a moment on the threshing floor when Ruth, after following the advice of her mother-in-law, proposes to Boaz by asking him to "spread his wing over her" which is a picture of marriage. God spreads his wing over Israel to signify the marital relationship between them (Ezekiel 16) and this is where true security lies - under the wing of God, as part of his family. There is a rest for the people of God, but it is not the kind promised by the world - the kind of fake security offered by the world (2 John 2) - the desire of the flesh, the desire of the eyes, and the boasting of all the stuff we have - only pretends to give us security but doesn't because its all passing away. 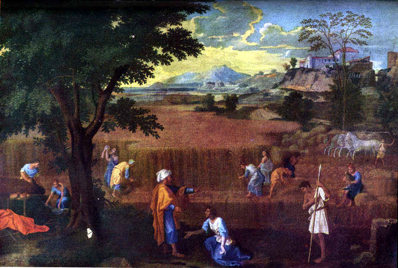 Ahhh, Some color on their skin. Now that's a better painting! Of course every barley field in Bethlehem had a fine stable of expensive white Arabian horses . . .

Anyway, Naomi [whose name means "Pleasant"] tells the village woman to call her "Bitter" [Mara] because God has cruelly left her empty-handed. But as the events unfold, God proves Himself faithful to provide, and Naomi has her hands full with a grandson (Obed), plenty of barley, and a promising future.

OBVIOUSLY there is more to the story than that but thats kind of the gist of what came out this morning.

Anyway, I feel that flu coming on so i will take it easy today as i slowly roast the chicken and pumpkin and as I close my computer and don't look at it again for a really long time. Peace to all, and enjoy your rest this Lord's day.

Why I don't go to church

Internet Monk has a hilarious list of a dozen study bibles that should be released later this year. At least, they should be. Don't take him too seriously. HT: Todd Rhoades where I stole this picture. 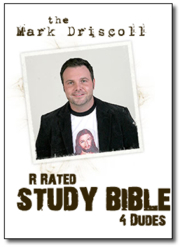 "The Mark Driscoll R-Rated Study Bible for Dudes. Freak out your reformed Baptist friends with Mark Driscoll’s comedic, rude and radically male centered interpretations of scripture. This is a study Bible that reaches the emerging culture while denouncing the emerging church. A fashion section helps you to see the scriptural mandates for mechanic’s shirts and hemp necklaces. Puzzlingly endorsed by John Piper, an alternative sheet of negative endorsements from various reformed bloggers is available on request. Profanity in red letters. Crude and shocking sexual episodes in blue. Bible doctrine is related to MMA throughout."

See the rest of the Bibles.

Blog Action Day is an opportunity to blog about poverty.
HT: Devlounge

For my little post on poverty, and how to relieve it, I dipped into an earlier project that really excited me and contained some memes that I thought needed a spotlight. Its a microbusiness enterprise called The Indian Taxi Fund., started by my friend Josh Brown.

"So here’s my modest/ambitious proposal . . . create a scale-free network that doesn’t rely on multiple lines going to one source. To get rid of the lines altogether and create spiders. And to leverage the crowdsourcing of blogs and the benevolence of businesses and individuals." Josh Brown, My Proposal. 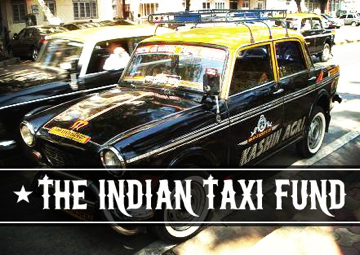 Like all true Mac fans I am following the announcements at Apple HQ about the new macs. Not buying one, though, no matter how sexy! I am watching it live at Engadget 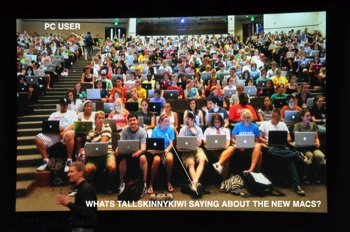 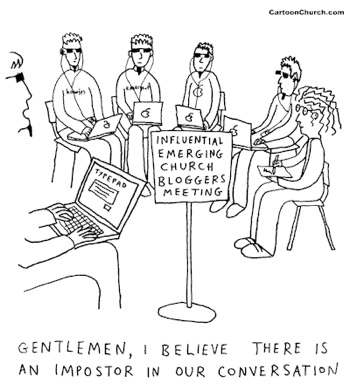 The film I told you about - Call and Response - has gone quite viral and might be an award winner. CNN are covering it. We are requesting our local theater show it as soon as they can. I just forwarded an email flyer to some of my friends who might not have seen it yet. Anyone seen it who wants to talk about it or leave a response in the comments below???????? Hello???????

We enjoyed a special screening of Call and Response on Saturday night, at our special summit in Tahoe. Filmmaker Justin Dillon was there and talked about what he was thinking when he made this BRILLIANT film that opens around the country on October 10th in a limited number of cinemas. Its a GREAT film that tackles the subject of human trafficking in USA using music, story, and the philosophy of blues. It was the blues that I especially connected with and the wisdom of Dr Cornel West on the blues concept of call and response. Also good to see some well known celebrities speak up or sing out on human trafficking. Hope it does really well. Go see it, dammit!
Call and Response on Facebook

Actually, what Justin has accomplished in bringing in so many artists around this cause reminded me of what Ry Cooder did with Buena Vista Social Club . . .but with a serious social conscience. Ok - now watch the trailer