TallSkinnyKiwi on Something Beautiful Podcast

TallSkinnyKiwi interviewed on the Something Beautiful Podcast - Did I just refer to myself in the third person??? On the podcast, which is hosted and commented on by some really wonderful people with interesting accents, I talk about my training, early mission experience, fundamentalist background as a street evangelist, the side-benefits of Bible smuggling, tinkering around with the early emerging church in the 80's and 90's, and I fess up to my particular heresies.

The State of the Church Online (survey)

A 7 question survey that will help figure out the state of the church online. Wanna help a brotha? Details below

Continue reading "The State of the Church Online (survey)" »

A Christianity Worth Believing, by Doug Pagitt

I just finished Doug Pagitt's new book, A Christianity Worth Believing: Hope filled, open armed, alive-and-well faith". Its a really good read and its Doug's best book by far. Very well written, vulnerable, conversational, theological, playful and intensely personal. It occasionally weaves into Doug's childhood to dig out laughable moments like a Coen brothers movie. I am a little biased because Doug has been a good friend for a really long time, but its a book that will introduce you to Doug and his family and his thinking and his church and his life - all of which are inseparable in the mind of Doug as well as in his book.

Theologically, Doug pulls the pendulum away from a Reformed theology over to the side sometimes occupied by more liberal thinking theologians. That is not to say its liberal, because that would be short-cutting the conversation. Doug brings a strong argument against what he sees as a Greek-influenced semi-gnostic understanding of redemption and reveals his bias towards a greater continuity with this world and the next, and the wider role of redemption in all of creation which he claims also suffered from the effects of sin. Where his theology is lacking, imho, is regarding the place of human faith, the act of believing, the necessity of grasping the salvation provided for us by God through Christ. Redemption is not an automatic consequence of the resurrection. I will have words with him when we next have a meal together

As for the book - its a great read and a great way to access the mind of Doug Pagitt who really is a wonderful and integral person and will go down in history as one of America's key leaders in the emerging church movement.

Interesting conference on today in Michigan. Exploring the Emerging Church: Theology, Culture, Ritual, and Meaning, hosted by Calvin Institute of Christian Worship. A book will be emerging from this conference and a list of budding chapters can be downloaded here and read. I am guessing the authors will be kicking around the material today.

Worth a read. The Coming Evangelical Crash is part one in a stream of thoughts from the blogging iMonk. Same of the same stuff I was saying a decade ago and the stuff that has caused us to change our methodology so drastically. Big one for me is sustainability. Evangelical leaders can talk all they want about getting their doctrine right but the movement itself, except the house/organic church movement and some other creative low-flying movements, is financially unsustainable in its present shape. Thats number se7en:

BEST POINT:
7) A major aspect of this collapse will happen because money will not be flowing towards evangelicalism in the same way as before. The passing of the denominationally loyal, very generous “greatest generation” and the arrival of the Boomers as the backbone of evangelicalism will signal a major shift in evangelical finances, and that shift will continue into a steep drop and the inevitable results for schools, churches, missions, ministries and salaries.

Yes, and add to that seminaries and conferences.

RELATED ON TSK:
Top 5 Ways for Ministries to Get Over the Recession
The Carnival is Over
The Fourth Sector and Emerging Mission

. . . according to the geeks at GenderAnalyzer.com. Honestly, I soooooo do NOT know why they rated me so low on the male scale. omg! I am certainly a MAN, yea . . indeed . . . but i have a wife and 4 daughters and I think the way I talk and write and blog is affected by that. Do you know what I mean? Can you FEEL me on that one?

HT: to Lingamish which, contrary to popular opinion, is actually written by a man

After a lot of discussion, we decided on a name for this years Roundtable for Emerging and Underground Ministries - "Kalejdoskop", which in English, means Kaleidoscope. Bet you would never guess that in a hundred years.

Why a Polish name? Because the event will be in Poland and we have a habit of letting the host countries name the event in their language. Thus, we had Die Gefaehten 'The Fellowship' in Germany (2006), Epicentre (2004, UK) Epicentrum (2003, Czech Republic), Epicenter (USA, 2001) and Ecclesia (USA, 1999)

INTERESTING TRIVIA: "Kalejdoskop (Kaleidoscope) means "to look at a beautiful shape" So, our hope for this Roundtable, is to gather leaders from many nations and allow us to look at the shape of the body of Christ - to see it's current beauty and how it is taking shape and pointing to a beautiful future." Andrew Jones, from the invitation.


Dates are July 8-11, 2009. This year will be a big one and in fact, a GLOBAL one, meaning that all the continents [or most of them] will be represented. In 2009, we are expecting emerging church and underground ministry leaders from about 30 countries. We will meet for discussion, resourcing, prayer, encouragement, networking, indoctrinating, friendly insults, late nights, bad coffee and a good time. This roundtable will be held at the Slot Art Festival which happens when 6000 young people turn up with tents and sleeping bags at a huge Cistercian Abbey in Lubiaz, Poland. Our family were there in 2007 and really loved it.

INTERESTING TRIVIA: "Founded 1163 and closed 1810. The abbey is believed to be the second largest Christian architectural complex in the world (after Spanish Escorial). The area of the roofs is about 2.5 hectares, and the length of the facade is 223 meters (the longest baroque facade in Europe). In the crypts, there are 98 well-preserved mummies of Silesian dukes." Link

And no, in case you were wondering, we are NOT going crypt-digging to crack open old musty mummy boxes with crowbars! But, there WILL be a celebration evening in the Princes Hall [permission pending], possibly the world"s best example of a Baroque ballroom, which I am pretty excited about. Anyone partial to a dance? 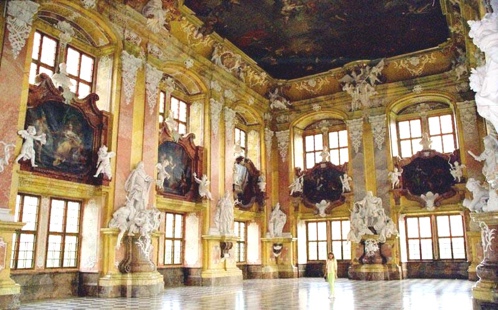 Now thats posh! Lets hear it for the Counter-Reformation . . . YEAH!!!

INTERESTING TRIVIA: Rock star Michael Jackson requested to buy this Abbey and was turned down.

The Underground Railroad network returns to be a major player in this year's event. They have been hosting roundtables since the mid 90's and usually host a smaller one for North Americans each year at Cornerstone Festival. Thanks Trevor!

The Kalejdoskop Roundtable is an invitation-only event for Christian network leaders. Nobody can enter unless they have an official invitation and they can spell 'Kalejdoskop' without looking it up. The roundtable represents the generosity of Slot Art Festival and a number of Christian Foundations and ministries that are supporting mission to the emerging culture. There is no charge for participants apart from a puny 10 Euros a day entry ticket to the Festival which includes camping priviledges. If someone can't afford that, then pity the poor beggars - REALLY - 10 Euros a day - compare that with most Christian conferences these days! However, they can apply for a scholarship if they really need to.

Invitations have been sent out but there are some other countries and networks not yet represented. If you know of a Christian network leader or movement catalyst in the emerging culture, especially if they are working in urban centers, among postmodern youth, alternative cultures etc, and you think they and their network should be represented, then send me an email or leave a comment below.

Related: Festivals as a Way Forward

Adam Abu-Nab emailed me this morning to throw me a bone. Adam is helping to launch a new 2.0 app called aMap. It's "designed to promote the art of arguing by mapping out complex arguments in a simple visual way across social media."

I thought i would test it out with an argument on the emerging church since there is lots of juicy fodder out there to find disagreement on. Heres a good one to start:

I read on the blogs this week that Rutledge Etheridge will deliver three seminar lectures, entitled "The Church's Identity Crisis: Sola Scriptura and The Emerging Church". "While we should applaud and apply much of its content, we must also confront that it is moved along by an old philosophical wind which ever threatens to wrest Christ's church from the foundation of her faith – the written Word of God," says Etheridge, whose lectures next Saturday at RPTS are sponsored by the Reformation Society of Pittsburgh. 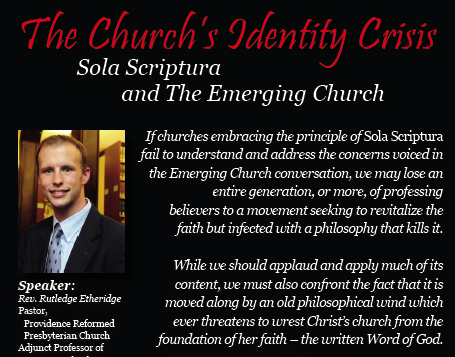 Etheridge claims the written Word of God is the foundation of the church's faith. OK. Faith comes by hearing and hearing by the Word of God. Thats a lot better than some cooked up propositions by old bearded men with robes.

And apparently the emerging church believes something different. Fair enough. Lets take the prototypical emerging church claim [let me make a general sweeping statement here] that . . say . . the foundation for our faith is actually the Person of Jesus Christ, the second Person of the Trinity, the living eternal Word of God.

Again, just road-testing this software, not trying to start World War Three. I have typed in one or two supporting arguments on the emerging church side. If you want to help me, pick a side, any side, jump in, shoot me down, quote the Anabaptists, back me up, whatever, and lets see if we can successfully have a 2.0 discussion.

The Internet: Over One Billion Served

Sounds like McDonalds. The Internet has hit the one billion mark. Biggest player is China. Heres the line up, courtesy of Comscore. HT: thenextweb. 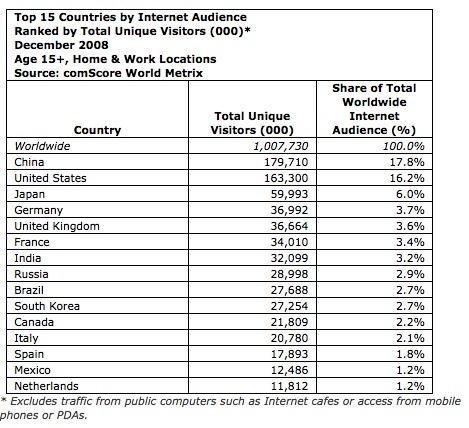 UPDATE: Start reading the 2009 Aussie Synchroblogs here with Spirit of Australia and then follow the links on that page.

ORIGINAL: If you want to be a part of the Australian Synchoblog for Australia Day 2009, then get in touch with Matt Stone. 2008 was a great experiment. The most memorable moment was when Hamo of Backyard Missionary hit a raw post-charismatic nerve by saying,

"The next time someone prophesies massive revival in your church tell them they are full of crap. . ."