Perspectives on the World Christian Movement and My Little Chapter 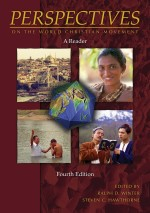 170 articles from "150 mission scholars and practitioners". If you haven't read it then shame on you - you really should have. And the brand new updated edition is a great excuse to start. The fourth edition of Perspectives on the World Christian Movement is now shipping and guess what . . . . I have a chapter in it. "Mission Comes Home" by Andrew Jones. Its a short biographical look at the idea of multi-directional missions in our post-Christian Western society. I share my story of being a short term missionary overseas and then returning to find my own country is just as needy, and in some cases, even more so. I also give some history of the "emergence" of new "missional" contextual models of church among the Western counterculture and how that has impacted the church landscape of today. And of course some practical tips in how to actually get started.

I was really amazed when they asked me to write this chapter. I have been a big fan of Perspectives since the first edition in the 80's and I have even taught part of the course before. I am pretty sure that my chapter is the only one that tackles mission to the West rather than from the West, but I will have to read the whole thing to be sure.

So, if you buy the book, or take the course [HIGHLY recommended] and want to chat about my little chapter, just leave a comment below.

I took this picture a few years ago. The light hitting the thief on the cross is natural. Story here. 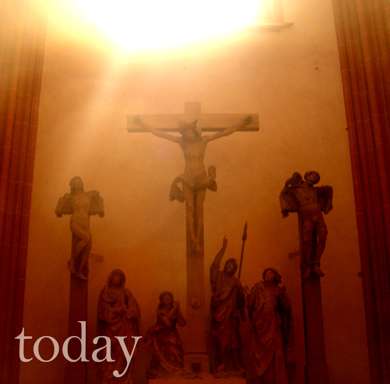 “Setting up movie theaters to project the graven image of rock-star celebrity pastors across the United States has some long-term implications.”
Ed Stetzer, on video, this week in Florida. Great quote. I tend to agree with Ed. I was at this conference in Florida 2 years ago and had the same concerns.

Lisbon is really exciting. So much happening here. Lisbon, like Casey's mom, has got it going on!

We had a great dinner last night with Denny and Maureen Hurst (left) and some Germans who were flying around in helicopters all day, taking photos of airports, and members of the Triplet band who were practicing somewhere in the basement. 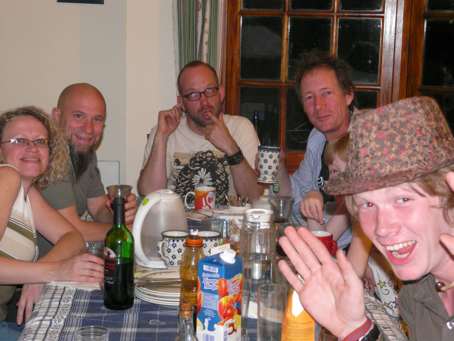 The Hursts started a Christian music festival in Italy a few years back called Rock on the Rock and have moved their family over to Lisbon to plug into the scene here and see what transpires. They were part of our roundtable in Germany 3 years ago but will not be able to make it to Poland this year for our Roundtable there. About a week ago, the Hursts worked with some other groups in hosting a big skate event that had about 400 young people - bigger than the professional skate events here. Check out their not-so-typical missionary family video.

We head off today for Lisbon, Portugal. Its been a great time here at Mount of Oaks, living off-grid and meeting new friends. Barbara cooked us a traditional fish dinner last night. More news reporters came yesterday and stayed the whole day. There has been a lot of attention recently from the press which is a good thing. You can keep up with Barbara on her blog - Shantii Pilgrim. 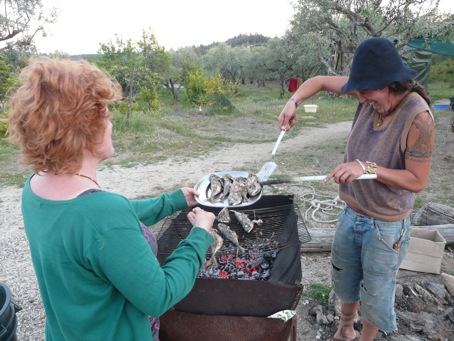 Song of Solomon in the blogs

The Song of Solomon seems to be the most blogged about book of the Bible over the past few days. John MacArthur, in the Rape of Solomon's Song is critical of Mark Driscoll's crassness and explicitness in his teaching series. I haven't heard Mark's series but I did hear a few things.

In 1992 I preached a sermon at North Beach Baptist church (where I was associate pastor) on Song of Solomon. The title of the message was "Sex That Sizzles" and it was a celebration of the intimacy, the verdant and luxuriously sensual garden, of a sexual relationship in its right context, and in its right time. It got a lot of press and the tape seemed to go all over the place to all kinds of churches and groups. Many had never heard this side of the book before, having heard mostly of its spiritual implications rather than its erotic imagery. People appreciated the talk and I got a lot of invitations to speak at youth groups. But I did it in a respectful way, one which honored the poetic nature of the book.

And I never presented the teaching of Song of Solomon in a prescriptive way, or in a way that would lead someone to demand certain practices because they are celebrated in the Scriptures. This would be paramount to abuse. We need to watch out for that.

Interestingly enough, I was reading poetry from the Persian poet, Rumi, yesterday and some of his stories are far more eye-popping than Song of Solomon and far cruder in comparison. 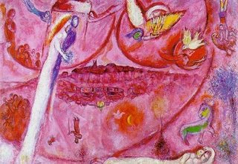 Just for Geeks:
Speaking of translation, and also connected with the mystery vs. relevance debate in Song of Solomon, check out the influence of Walter Benjamin's 'Task of the Translator' here on Google Books version of the Postmodern Bible Reader. I have the big hard copy of this book at home but here you can read about dynamic equivalence in translating the Bible as a "modern" task OR the more postmodern idea of Walter B that a translator has to protect the text in order to honor it. The sentence, says Benjamin, is a "wall" and not a "bottle." The text must confront the original text more than the transmission of its meaning. In this understanding of translation, it seems to me that John MacArthur is taking Walter Benjamin's more 'postmodern' approach and Mark Driscoll the modern. Just thinking out loud.

How do I follow on from the previous post on PMS Coffee? Here are some more memorable product names that have crossed my attention.

We have just used a product in the UK to attach the insulation onto the side of our truck which came highly recommended by everyone. Its called Sticks Like Sh*t and we ended up buying a whole case of it. It works, just as it promises. 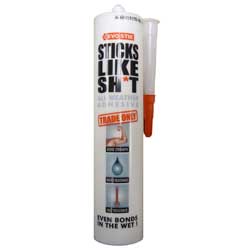 Not as interesting as the Australian engine starting fluid in a spray can. Its called "Start Ya Bastard" and it achieved the status of the most controversial product in 2008. The official official website has ringtones for your phone that are worth hearing. 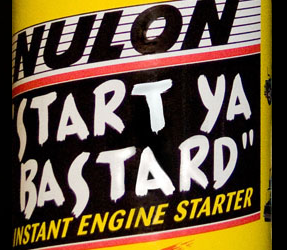 If you want to read my thoughts on controversial words, check out Offensive Language: I think my mother taught me.
If you are interested in strange and weird products, check out what some church people have come up with on DarkRoastedBlend, like this one: 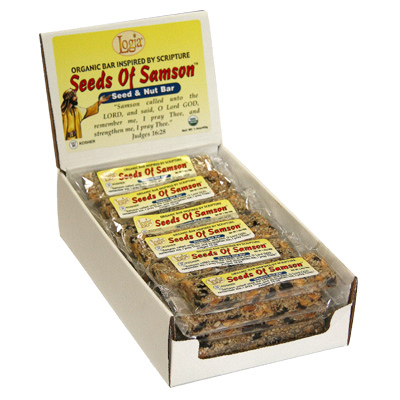 Big moment for Twitter: Ashton Kutcher beats CNN to become the first Twitter millionaire, having over a million followers. Rumors are that Google might announce a Twitter acquisition tomorrow. More Google eyes into my life - that makes me nervous and it makes me glad I removed my Google ads from this blog.

I read through the letter to the Hebrews again yesterday, and noticed that believers are to "exhort each other daily". A daily connection is difficult with a typical weekly church rhythm, or with our lives of geographical isolation. But social media can make a positive difference in helping us stay connected, share how we are doing, and offer quick 140 character exhortations to each other.

Darker side? A follower is not necessarily a friend. I would rather have a single good friend than a million followers.

"A man of many companions [followers?????] may come to ruin, but there is a friend who sticks closer than a brother" Proverbs 18:24

Another co-ordinated blogging venture, this time with international voices giving "The Good News" as they see it. Sivin Kit from Malaysia blogs today. I read Brad Sargent yesterday. Track the series through JR Woodward's blog, RSS or Twitter.

A podcast worth listening to: Emerging Church Panel discussion from a publishing perspective at the Christian Book Expo in Dallas a week or so ago. Or watch the video here. I will avoid giving my usual comments that authors are not necessarily leaders and much of the emerging church is held hostage by the American publishing machine and that people who live in classrooms and can only access knowledge through books may not be the best positioned observers . . etc. Suspending those criticisms, and putting them aside, this is an absolutely must-listen-to podcast on many levels.

Scot McKnight, who responds to Kevin DeYoung on the panel with more gumption than normally characterizes his writings, is brilliant and insightful as usual. On the emerging church, in which he references his previous talk at at Westminster, he says:
1. We recognize that there is massive diversity.
2. It's creative. Relevant is not the point.
3. Its a safe place for people who have questions.
4. It has unfortunately been caught in the cross-hairs of a culture war.
Well said.

And let me agree again with Scot on the failure of Don Carson's book to adequately and accurately portray the emerging church. Saying that Steve Chalke is the most influential leader in the emerging church in the UK is like saying Borat is the most influential leader in Kazakhstan. Despite commonly held perceptions from the uninformed [according to Wired.com, Borat actually IS the most recognized representative of Kazakhstan], its just not true. And that is not a slam on Steve Chalke who is a well-respected Christian leader in his own right. 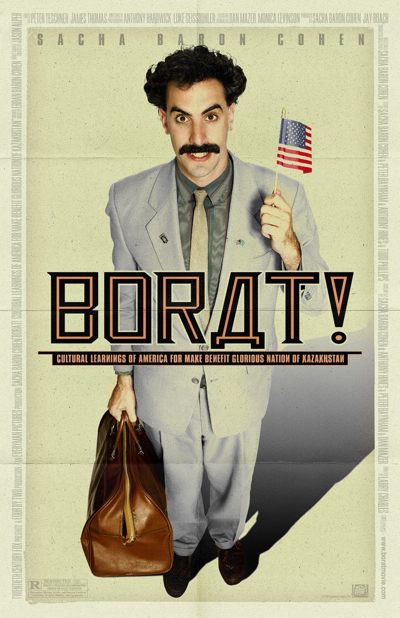 Tony Jones is articulate and clear. We disagree on a few issues, he and I, but here he speaks clearly about what he believes and why and I encourage his critics to listen to him on this panel.

Kevin DeYoung shares his heart and his concerns. Although I agree with Scot that Kevin's opening remarks are neither accurate nor charitable, Kevin voices the concerns of many and for that reason is worth taking seriously - which I probably should have done when I first came across his book, Why They Don't Say Emergent

Alex and Brett Harris play the youth card and the outreach card but whenever I play the same cards, the emerging church seems to come out on top - not so much the traditional church. Besides, teenagers in USA are generally not starting their own expressions of church until they are in their twenties so it might be premature to suggest they will opt for or against either traditional or emerging. Most likely, they will be influenced by both but will not have the resources to start unsustainable models of church or mission.

Thought: Jesus died for our sins - story or statement? Both! One gave birth to the other. And the gospel is expressed BOTH in narrative and propositional terms. There is no competition going on. It is at once a story [and a story that actually happened] and a million statements that follow and describe it. Alex and Brett are right to say that the next generation do not want to and probably will not have to choose between the two.

To further mess with your mind, check out the totally different kinds of comments and reactions on Tony's blog with those on Pyro. And check out the confusion of the "emergent" label from a retailer's perspective here - something that has given many of us pause in recommending the use of "emerging" or "emergent" in trying to accurately communicate the heart of a new movement.