Build up your blog

After a busy summer, your blog is probably TIRED and floppy and boring like mine is right now. I have two friends that are both great bloggers and both following God. I am talking about Tentblogger and Problogger. Both have courses for you to beat the flab out of your blog and get it back in shape:

- PROBLOGGER: Build a Better blog in 31 days. And if you can afford it, Darren is promoting a bloggers guide to online marketing. If not, check out Darren's advice on how churches can use social media.

If the Teletubbies took holidays . . .

We are in Bulgaria now. On the coast of the Black Sea, near an up-and-coming social enterprise center owned by a friend of mine. Bulgaria rocks! Check out these cool round beach huts at a very retro campground just south of Sunny Beach. Round, colourful, and probably bomb-proof. If the Teletubbies took holidays . . . 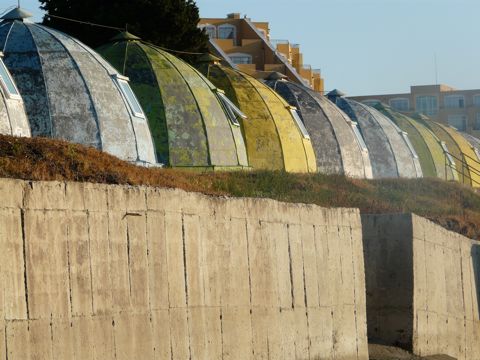 Last year I started something in response to all the Koran burning nonsense. Instead of "Burning a Koran" I encouraged you to "Blog a Koran" or find a quote from the Koran that you think is meaningful. My post on Sep 11 was called Water for Pilgrims.

This year, I will be posting from a Muslim country. Please join me by quoting a passage from the Koran followed by your respectful perspective on that passage. Leave a link to your blog in the comments below and I will aggregate the links. THANKS!

Yep, we are in Transylvaaaania [say it with a drawn-out Dracula accent followed by sadistic laugh], Romaaaania and there really are bats everywhere. At nighttime, anyway. There are a whoppin' 9 people in our truck and we are zooming across to the Black Sea and then down to visit a ministry in Varna, Bulgaria. Lovely people here in Romania. Very friendly. No vampire jokes, please.

The first camping ground we found, Camping International in Timosoara, wanted to charge us 55 Euros which we felt was a rip off. So we have been sleeping at rest areas and next to restaurants to save some money. Although we all need a shower now and we might find a camping ground soon. This one looks interesting . . . 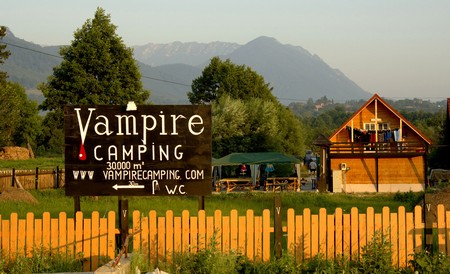 Hey, we are driving through Romania and Bulgaria (east side). Do you know of any ministries or networks that are emerging among the next generation in these countries that you think I should visit?

It's been an interesting few weeks in Czech and Germany. Some moments and images below, like visiting getting a tour of a Coptic Orthodox monastery, 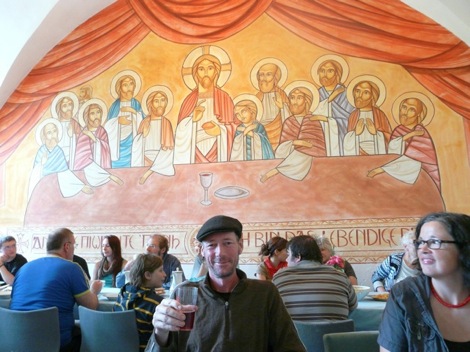 painting the roof of the motorhome, 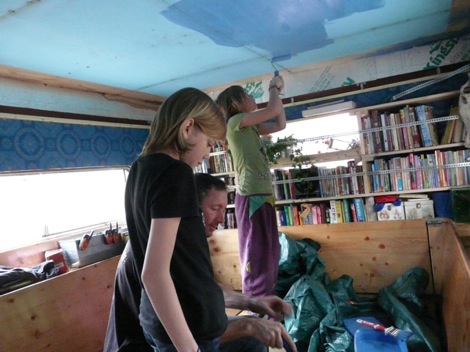 and blowing bubbles at Freakstock Festival. 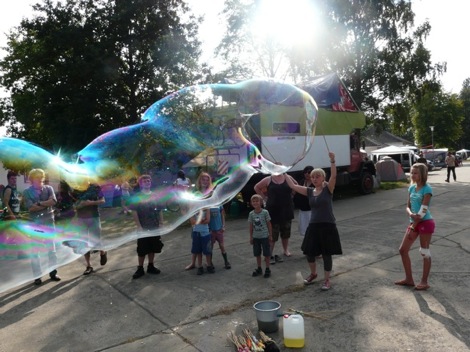 We are off east today, heading through Austria and Hungary to get to Romania and Bulgaria. Appreciate prayers for the journey.

The Emerging Church: Movement or Conversation?

It's great to see so much conversation on the emerging church. Roger Olsen is pumping out some provocative content. His post yesterday is on the topic of emerging church as a movement [or not].

It's a movement, dammit!

6 years ago, I was helping 2 other guys to write the Wikipedia stub on "emerging church" - which now reads quite differently but not necessarily more accurately. This question came up, of course. Is the emerging church a movement or just a "conversation". I asked Dr Paul Pierson, through Ryan Bolger, since Dr Pierson was my teacher on the subject at Fuller SWM. He sent a list of factors observed in revival and renewal movements that you can read on my old post called "Are We are Movement?"

I decided yes. Looking at the global spread and impact of the emerging church, we are indeed a movement.

Tony Jones has a new book called The Church Is Flat: The Relational Ecclesiology of the Emerging Church Movement

. Although his scope is limited to one type of emerging church and one country, Tony outlines the qualifications for a New Social Movement and shows that the emerging church movement qualifies as a NSM in multiple ways. This book is Tony's doctoral dissertation and is actually good reading.

When did the Emerging Church Movement start?

Hard to say. The first models were isolated experiments that launched in the mid to late 80's like Matthews Party (1986, Los Angeles) and New Song, NOS and Late Late Service (UK) Parallel Universe (1989, NZ), and various new monastic groups in Australia. By the mid to late 90's, other countries had their movements (Germany, Brazil, Chile, Japan, etc) and the scene was gaining traction and attention from traditional church as well as achieving competence in ministry.

BTW "movimento' is the name used by the South Americans who describe themselves as a "movement aimed at stimulating the implementation of new churches focused on the emergent generation known as the urban tribes." Check out this video on the how emerging church movimento has developed in the past 10 years from a South American perspective, even if you don't speak Portuguese. And watch for my handsome face.

2001 was a watershed year in the movement with large gatherings of networks and ministries (Emerge in Frankfurt, Epicenter in Texas, Emergent Village, etc) and for the next 6 years the movement was at full speed, building self-recognition and identification, disseminating practices and discoveries, publishing, dealing with criticism.

After 2007, there appeared to be a rift. It was harder to speak with one voice because the networks were so different from each other. In fact, there appeared to be two different emerging church movements - one that belonged in the world of academia and book publishing and led by older people with degrees and money and another, much larger emerging church movement on the streets and in the global cities where young people without many resources were starting simple forms of church and ministry that were very different from their parents church but not too different from what we read in the New Testament. The first group did not always represent the second group accurately so they shifted from under that umbrella.

As a response, some networks dropped the name 'emerging church' which was increasingly identified as being "American" or confused with being part of Emergent Village which was becoming somewhat colonial, myopic and 'narcissistic', some were renamed [Fresh Expressions in UK], there was decreasing blog discussion, some groups found themselves at odds withEV [Acts 29, Forge] many EC leaders were sought out and brought [bought??  . . . opps] over to traditional and mainline denominations, some networks stopped or downgraded because they had fulfilled their ministry [Forge in Australia, Sanctuary network in USA] and some were just not considered offensive or controversial anymore but were accepted into and supported by the mainstream [Emerging Church NetworkTexas, Tribal Generation Brazil, Emerging Church in the Church of Scotland].

In fact, our own ministry, The Boaz Project, ceased using emerging church terminology to describe the ministries we were helping to launch. Although I still teach on emerging church and keep up on the subject, I find some countries are confused by the label and other terms prove more helpful when it comes to networking and partnering.

My infamous post regarding the maturation of the movement in 2009 [some people said "death" which was a hasty overreaction] was poorly written and I wish I could have communicated better than I did [sorry everyone]. Some people still will not talk to me. I followed it up with a post on the ten streams of emerging church that I observed, after looking at 50 networks and ministries, had matured and were no longer offensive [10 Types of Emerging Church that will no longer upset your Grandfather] but that did not mean they were no longer functioning.

Are we also a conversation?

Yes, the emerging church is also a conversation. In the USA, this is mainly about ecclesiology, eschatology and ethics (including gender equality) in a postmodern world. In other countries different topics [like economics] are handled. The conversation will outlive the movement. In fact this is already true.

Are we too small to be a movement?

This depends on where you draw the line. In Roger Olsen's post, as well as Tony Jones' book, I see a tiny minority of the emerging church represented - maybe a dozen churches in the USA - and most of them all one kind. I would put these churches under one of my ten categories of emerging church. You could probably argue that such a small sampling would not qualify for a movement and you might be right. But looking at the global scene, which far outnumbers USA, the fresh expressions of church in the UK alone number 3000 [according to Bishop Graham Cray], I would say it is a movement for sure. And a conversation.

More important than asking whether the emerging church is a movement is asking at what stage this movement, in its respective countries, currently stands.

Related: When we stop emerging (2004), Fringe Expressions in Global Cities, My History of the Emerging Church, Part One.

Also, if you are a leader of an emerging church network, or just want to see the movement for yourself,  then please consider attending the next global roundtable which will be in Brazil, June 6-9. They had 4500 people at their event last year but the global invitation will make the 2012 En Contro/Tribal Generation a much larger event. Portuguese speakers may be interested in the Africa meeting later this month.

The evangelical mind has become a closed loop. It has evolved into a ‘Second Life’, a vivid, exotic alternative reality, with its own intrinsic plausibility and coherence but only an approximate and in many respects spurious relationship to the real world. The emerging church, therefore, stands for a deconstruction of this alternative virtual reality and a wholesale rethinking of the reasons for asserting a Christian identity in the world.

Andrew Perriman, What does the Emerging Church Stand For? P.OST

Yesterday visited OM Ships headquarters in Mosbach, Germany. My old cabin-mate from the MV Logos, John Satterley, is now helping to lead the ministry of MV Logos Hope. Nice to see him again,

Today we are in Kandern, hanging out with Wolfgang Simson, author of The House Church Book and the Starfish Manifesto. Always lots to talk about with Wolf. Right now the subject is Kingdom economics. Wolfgang Simson and I used to be part of a ministry called Dawn which focused on church planting networks and country-wide discipleship movements but we have both moved forward to more holistic ways of thinking and doing. All good conversation and conspiring to change the world kind of stuff.

Saw a bunch of bands last night at Freakstock Festival in Germany. Triplet, our friends from Portugal, did their final gig after 10 years. Lead singer Jasmin Jones is also performing solo. Psalters rocked everyone again. I saw them in 99 at Cornerstone when they first started. A crazy band who give everything away for donation and travel the US in this old school bus [below]. DJ Kenny Mitchell spun at the Artland. Kenny was with me in Japan years ago. Nice to be reunited with old friends . . . 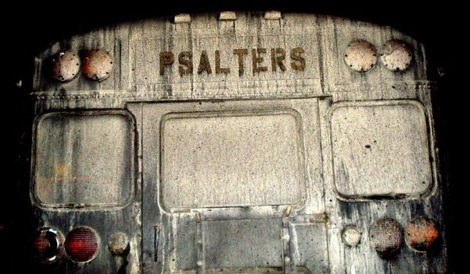