Sometimes, you need NOW funding to assist an emergency situation. When an earthquake hits, people need resources immediately. They have no house and only the clothes on their back. If its cold, their families will freeze. Rescue workers need to be fed or they will stop shifting bricks and more people will die.

Fundraising takes time and you need the funds NOW and not SOON, not even THEN, and forget about LATER.

In Turkey this month, we badly needed NOW funding to assist the earthquake relief in the first week. 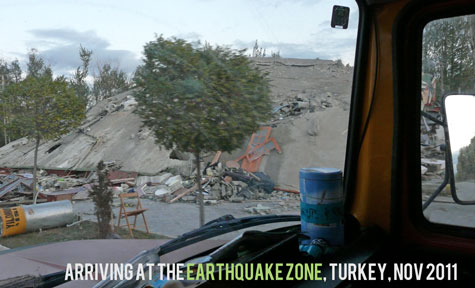 A crooked and perverse generation and a room full of prostitutes

Bali: This morning I went over to the "Prostitutes House" to bring some breakfast. Least I could do. The ladies over there have been cooking us breakfast everyday and some of us thought we should return the favour. Lovely, generous, beautiful ladies, from all over Indonesia, mostly young, mostly HIV+.

When I got there, they were all sitting in the front room, with their Bibles in front of them. It was their morning devotion and they asked me and my wife to join them.

The verse they were studying was Philippians 2:15

"Do everything without complaining or arguing so that you may be blameless and innocent, God's children without any faults among a crooked and perverse generation, among whom you shine like stars in the world"

They asked me to share some thoughts on the passage. Funny! In Seminary, they give you the impression that you will have 8 hours to prepare a message. Yeah, right! Yesterday I had 5 minutes. Today, about 5 seconds. And I didn't have my Bible.

What Would Jesus Wear? 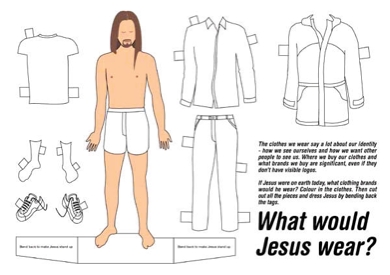 Classic cut out exercise from a Grace service in London.

In Nigeria, Bishop David Oyedepo of Winners Chapel has accumulated US$150 million. He is currently selling 2 of his 4 jets.

He is not selling his jets because of the recent documentaries that criticize his lifestyle for being "at odds with the poverty and helplessness that exists" in the communities he operates in, or the pressure from other megachurch pastors who did not make the Forbes Richest List like Bishop David. No, he is downsizing simply because of the "high maintenance costs" of those jets.

Anyone else think its time for Reformation in the church? Here's some interesting quotes on the Ka-Ching in the Ka-Church:

"Pentecostals understand that their worship is the 'show' that brings in the punters, who then buy the merchandise,"

Kate Mannix, editor of Online Catholic, from "God's Millionaires: Pentecostal churches are not waiting to inherit the earth. They are taking it now, tax-free." Business Review Weekly Magazine, Australian.

Continue reading "Ka-Ching in the Ka-Church" »

Something is Happening in Egypt

We left Egypt a week ago, right before Revolution II broke out.

Something is happening there. 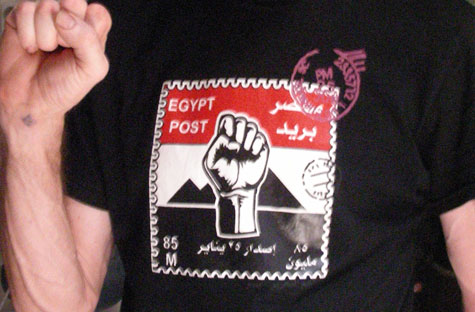 In some ways I wish I was still there but at the same time, I feel we were present for the beginnings of a spiritual revolution that is just as important as the political changes, and instrinsically linked to it.

You don't read that in the newspapers.

That's not to knock the newspapers. In fact, one newspaper has consistently delivered the the most accurate coverage of the Arab world protests including Egypt. Articles from the English news source, The Guardian, are forwarded to me almost daily friends in Cairo. These articles have come in the past few days from friends in Egypt.

Nov 23. Egypt has halted the drive to derail the Arab revolution

But more than just reporting from the scene, The Guardian has provided an interactive twitter map of the Arab Protests to plot the tweets from the on-location reporters.

And if you want some history of this movement then check out The Guardian's interactive Path of Protest Timeline. 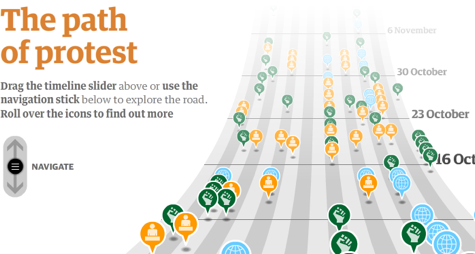 Thats impressive! HUGE KUDOS to The Guardian. Reminds me of CNN's role in the Gulf War.

However, the newspapers in general have neglected some essential pieces of the larger puzzle. One piece in particular is the movement of prayer, the 11.11.11 prayer gathering of 71,000 people in Cairo on Nov 11,2011 which was Egypt's largest Christian gathering in over a thousand years [how did they miss that?], the movement of unity among the churches themselves and between Christians and Muslims, demonstrated outwardly by circles of protection.

Continue reading "Something is Happening in Egypt" »

My wife is American so its customary for me to wish you a Happy Thanksgiving. Its also customary for us to cook a GINORMOUS turkey dinner and invite everyone and their dog in to eat it with our family. 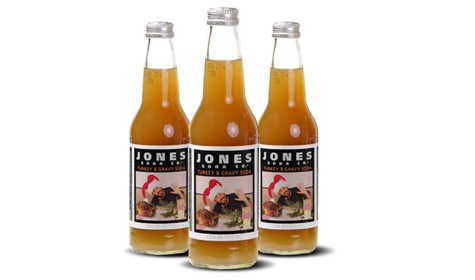 Yep that really is Turkey and Gravy Soda but its made by some other person named Jones.

This Thanksgiving season, we are in Indonesia, staying at a home for vulnerable youth. Tomorrow there will be about 35 young people, some HIV orphans, others whose lives have been saved from nasty stuff and are full of thanksgiving for a new start. That makes it more meaningful to us. We all have a lot to thank God for.

Hope you have a great day.

Cairo: An Egyptian friend tells us what happened when the public broadcasts lied about Christians killing 3 soldiers and encouraged people to run to Maspero and attack them.

I just spent a week and a half in Cairo, Egypt. People have asked me what's behind all the violence - is it the Christians or the Muslims?

This is more political than it is religious. Muslims are standing up for Christians and vice versa. It's not hard to figure out who or what is behind it. Just follow the money trail. People are being paid to beat up other people, and for their own gain.

I left Egypt a few days ago but my friends are keeping me informed. As well as confirming that there is a CEASEFIRE [thanks God!], here is some news:

"As for Tahrir, a ceasefire has been declared and it's all peaceful in the Square (at the moment)...I was with S. and he got off at Sadat station to join the demo...he was meeting a friend at Kasra Dobara, the large evangelical church behind the Mogamma building...apparently, the church has set up a clinic and medical centre to treat wounded and dying..." 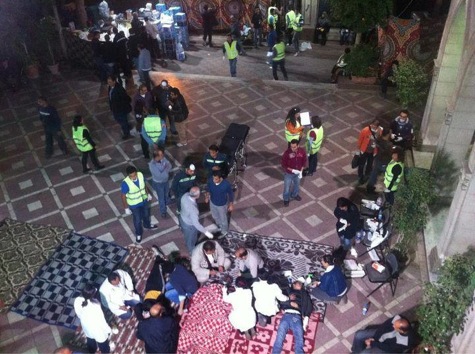 Here's a picture by my friend A.S., showing victims of riot police brutality being treated in front of the courtyard at Kasra Dubara Evangelical Church [...hands on Christianity...says Wally, who sent me the picture]. For some light and entertaining reading, Wally recommends: Islamic Televangelists

All night prayer meeting with 71,000 people

Egypt: The largest capital flight since the Exodus?

Real estate investment for churches and ministries can be a curse or a blessing. It's one area you can't afford to get wrong. Learn from the new church movements around the world that are RENTING URBAN and BUYING RURAL.

RENT URBAN: Urban real estate is expensive. And if you buy too early, your ministry gets stuck. Renting is cheaper and gives more flexibility. Some ministries have a number of rental properties in the city that act as urban monasteries and intentional living communities and sometimes shelters in the red light district. Renting allows you to set up short term ministries and then change strategy and location when needed. Be smart and rent urban.

BUY RURAL: Land out in the country is cheaper and more spacious. Even better, you can plant crops and generate some income. Buying rural gives stability to the crazy and often temporal urban ministries. If you get the chance, buy rural.

-  I am blogging this from a rented shelter for street kids in Indonesia. They also rent a house for ex-prostitutes around the corner. But in the country, an hour and a half away, they have bought some land that enables them to plant crops, host big events and enable ex-addicts to start a new life with Jesus and his friends.

- Urban Vision NZ, an outgrowth of Youth For Christ, that rents houses in the city for ministry but purchased an old Presbyterian campground and turned it into a contemporary monastery. This monastery is the location for PassionFest in February.

- In San Francisco, we operated out of a rented space that became our urban monastery but enjoyed a rural training center that was donated to another ministry and made available to us.

Seeking unity in the Egyptian Revolution

Egypt: 33 bodies in the main Cairo morgue right now. Might be more in Alexandria and other cities. 1700 injured, many blinded by rubber bullets. Last month's violence against Coptic Christians, which resulted in 23+ deaths, was the bloodiest sectarian violence in Egypt in 60 years. This week, things got even worse.

Its a mixed bag. The horror of death and the pain of persecution but also the hopeful signs of revival among the Christians, evidenced by last weeks all night prayer meeting which attracted 71,000 people [video], and attempts at unity among Muslims and Christians.

In Cairo, we interviewed one of the guys who has been working inside the revolution to bring peace between Muslims and Christians. This is the Cross and the Crescent T-shirt he created to reflect his heart for peace and harmony.

In the first video, he shares about the death of his brother during the riots but, as he says, he "still has to show the love."

[video taken down for some editing. sorry]

In the second video, he talks about his efforts to bring God's peace among the people and the Egyptian revolution that he says was stolen.

[video taken down for some editing]

The third video is about the crescent and the cross, how Egypt can be rebuilt when Christians and Muslims learn to love each other. Its still uploading. Link soon.